Amanda Holden signs for Everton in the Community

TV favourite Amanda Holden has been appointed an honorary patron of her football team’s charity, Everton in the Community.

The Britain’s Got Talent judge has accepted an ambassadorial role for the official charity of Everton Football Club, which is recognised as one of the UK’s leading sporting charities and regularly acknowledged on both a national and international stage for addressing a range of issues, including dementia – a topic very close to Amanda’s heart.

And during a recent visit to Liverpool for Britain’s Got Talent auditions Amanda took time out of her busy filming schedule to visit Goodison and find out more about the charity’s pioneering ‘Pass on the Memories’ programme which supports people living with dementia and their carers.

Amanda’s maternal grandfather, whom she credits for her love of music, sadly lost his battle with dementia in 2007 and since then she has publically campaigned to boost volunteering, education and support for the growing number of people with the condition.

During her time at the home of the Blues, Amanda took part in a series of memory quizzes alongside some of the people who attend the programme and put her general knowledge on the 50s and 60s to the test before meeting delivery staff and finding out more about ‘Pass on the Memories’ and the people it supports. Rounding off her visit, Amanda spent some time looking through the reminiscence memorabilia on display at the session and viewed a large scale knitted goal net which has been produced by the programmes participants. 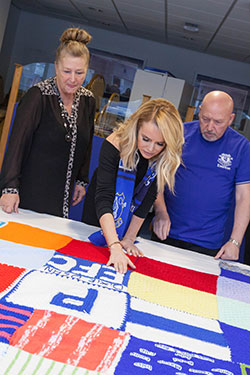 “The ‘Pass on the Memories’ programme is so personal to me because my own grandfather had dementia and we had to watch him slowly turn into a different person and then sadly slip away. By 2020, one million of us will be living with dementia and it is something we need to recognise, embrace and help which is exactly what this programme does. Dementia is the cruellest of illnesses and if you can come to something like this it provides a little ray of sunshine in quite a dark place. This programme gives people something to look forward to and also supports loved ones who stay strong by their side and help them live day to day.”

“You are never alone when you are a part of Everton in the Community, it very much feels like a family and you are always made to feel welcome,” added Amanda.

The popular actress and presenter has taken up her role at Everton in the Community with immediate effect and will use her profile to promote all of the good work the charity undertakes to tackle a host of social issues including health, employability, crime, education, poverty, youth justice and disability.

Established in 1988, Everton in the Community is an award-winning charity which delivers over 60 programmes to support the most vulnerable and underprivileged people in Merseyside.

In recent years, the charity has helped more than 600 local unemployed people become ‘job ready’ through its ‘Everton 4 Employment’ scheme; developed a number of programmes with Mersey Care NHS Trust to tackle mental health issues among different groups within the local community and runs the biggest football programme for people with disabilities of any club in the world with 14 teams for all ages and abilities.

Everton in the Community has also achieved an 78 percent non re-offending rate with its Safe Hands programme which helps integrate young offenders back into society and the charity even made history when it became the first associated to a Premier League football club to open a Free School, ‘Everton Free School’ in 2012.

And given some of Kone's performances of late, I mean that genuinely not a joke!

Don't know how she became an Evertonian. Wouldn't be surprised if she knew Bill Kenwrighr and Jenny Seagrove.

I wondered that myself, but it could be that she was once married to Les Dennis, although I am not sure he was an Evertonian either?

It's maybe like Ed Stewpot Stewart, who sadly passed recently, who felt sorry for us, after a drubbing, we have had a few over the years, other than that, it would be interesting to know!

When hubby brought her along to Goodison, there would be no doubt Bill greased the wheels and gave it the spiel. Good on him.

Having said that, if she does get involved in Everton in the Community, then good on her.

I've seen her at the match with her daughter.

Credit to her for using her name for Everton in the Community.

Whether we like it or not the world loves celebs. And I love Amanda Holden!