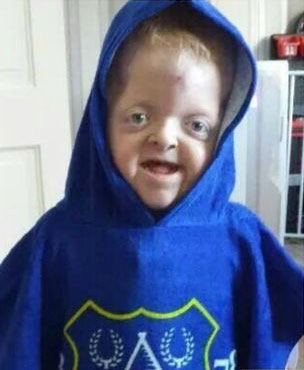 Everton star Seamus Coleman has made a Ł5,000 donation to help fulfil Daire Flannagan's wish of travelling to Goodison Park to his Blue heroes.

The six-year-old has overcome massive odds after being born with a rare genetic condition known as Apert Syndrome which doctors claimed meant he was unlikely to survive beyond 48 hours after he was born.

"I read Daire's story online and would love to help get him his trip to Goodison next season. I made a donation of 5 thousand pounds and hope that can help get Daire and his family a safe trip to Liverpool. Looking forward to seeing you at a game next season."

According to a report on BelfastLive's website, Everton have already been in touch Daire's family to offer him tickets to a game of his choice next season but it's the travel arrangements that are the most difficult for the family because he has had to fly via Air Ambulance in the past.

"[T]he boat might be the best option," said his mother, Colette. "I can't see why he couldn't go on the boat but the only thing is his concentration span and trying to keep him entertained but we'll hopefully get there."

Meanwhile, Ciaran Rogan, who set up the fundraising campaign for Daire said has bowled over when he received the message from Seamus.

"It's absolutely outstanding and overwhelming to know that a true blue player has given his support to something like this and to help a young lad out.

"It was overpowering message to receive."

Quotes or other material sourced from Belfast Live

Let's give it to these today boys. COYB

Some club we are.

Get in there Daire lad

Enjoy your day out, brave Diare – you are, and will be, yet another part of the history of our beautiful Everton family.

Safe journey over, and enjoy your match day, Daire!

Brilliantly done by Seamus Coleman; I hope the little lad has the best time.