Two Blues in four-way battle for Young Player of the Year?

15/03/2016  [Jump to last]
The statistics so far show that both Romelu Lukaku and Ross Barkley are in the running to be voted Young Player of the Year.

Tottenham's Harry Kane may have scored one more goal than Lukaku (from more appearances to date) but the Everton striker has more assists and is involved in a goal for the Blues more often than any of the other three players in this infographic from Oulala.com.

Ross Barkley, meanwhile, is enjoying his best season of his career with his best tally of goals and assists. 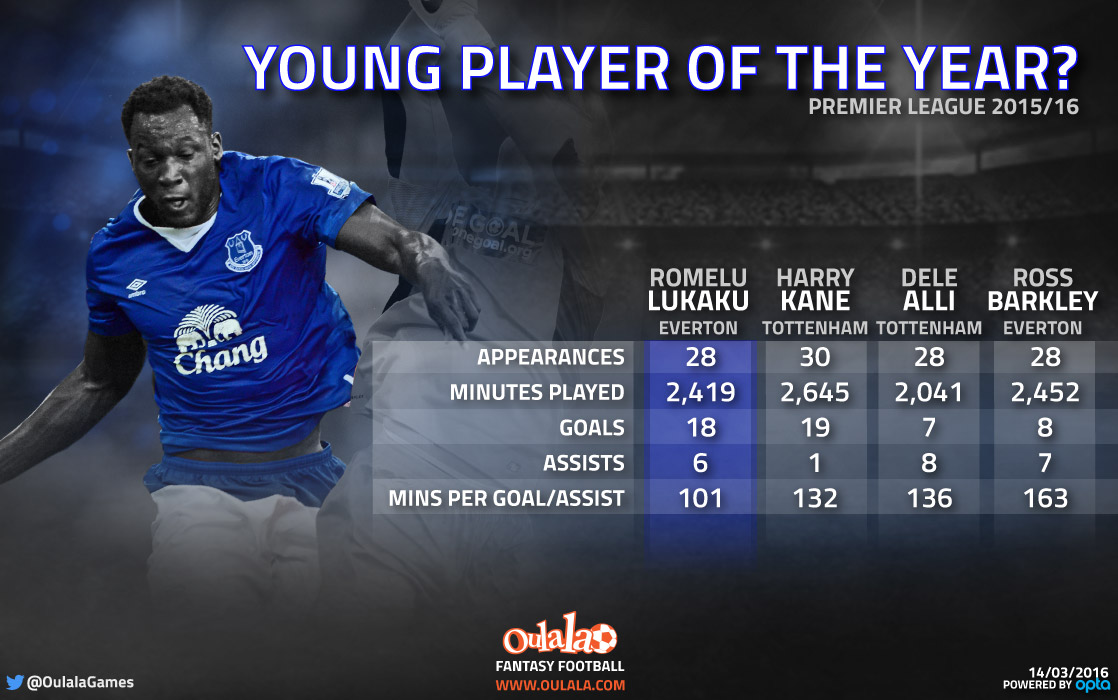 He gets my vote!

If you look at all competitions, Lukaku has 25 to Kane's 22 goals.

Take into account that Kane's total includes 7 penalties whereas Rom's is just 1, there is no doubt whose goalscoring record is better this season.

OK, he's enjoyed a good start to his career, but plenty of young players have looked to have had the world at their feet when they were young but failed to kick on and no one can say with any certainty that a young player will develop as quickly as Alli has so far.

Anthony Dwyer
7 Posted 16/03/2016 at 11:24:28
I think individually Rom has performed better than any youngster this season, and as the award is supposed to be an individual award, he should be a very strong contender.

That said, Kane is on fire too and has scored all season long in a team I consider no better player for player than the blues. But Kane is sitting very close to top, if he was to win the league for spurs with a few important goals between now and the end of the season, then I believe he will walk the award, and rightly so.

Ross and Ali have both stepped up to the plate and looked brilliant too, but no doubt for me that they are in the shadow of Rom and Kane.

It's a big achievement for our lads to be in the running for the award, especially considering how poor we have been throughout the season.

Phil Sammon
8 Posted 16/03/2016 at 11:47:02
Rom has carried us if we're honest. I think he deserves this individual accolade. Kane has scored plenty too but, as Graham says, an awful lot have been from the spot.

Barkley is light years behind the three of them in the running for this award. I still have hugely high hopes for the lad but, I must say, I feel his stats hugely flatter him.

He's getting in the box more, which is great to see, but I still don't see him as a dangerous player. Ross in full flight is such a wonderful, yet tragically rare, sight. More often than not I'm straining my eyes to differentiate between him and McCarthy.

Trouble is, Martinez is patting him on the back for his pass completion rate. You reckon that's what Zidane was worried about when he was threading eye-of-the-needle through-balls to on-running strikers?

I hate to say it and I hope I'm wrong, but I fear Leicester will cave in right at the death with their run in:

Sam Hoare
10 Posted 16/03/2016 at 12:05:44
Phil, I seldom disagree with you but harsh to say that Ross is not a dangerous player given 8 goals and 7 assists in the league this season and a fair few more in the cups. Pretty strong from an attacking midfielder.

He's not the finished article by a long way but he's found a lot more end product this season and I have been most encouraged by his improvement.

Ernie Baywood
11 Posted 16/03/2016 at 12:11:07
Agree with most that Ross probably sits fourth in this. His performances have been very good but little of what he does beyond the goals and assists seems to register with people.

Alli and Rom the leaders so far but, as others have said, if Kane can fire them to the league then he'll stand out.