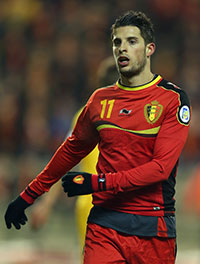 Kevin Mirallas has added to Everton's contingent on international duty after being called up from reserve by Belgium.

Marc Wilmots has summoned the forward for the Red Devils' friendly against Portgual next week following an injury to Liverpool striker Divok Origi.

Mirallas, at one time a regular on his country's international scene, has been omitted from the last two Belgium squads, only to then be called up as cover for an injury. He came in for Maroune Fellaini back in November.

The 28-year-old has fallen down the pecking order for club and country due to poor form over the past year and has done his chances of holding down a regular place in Everton's first team further damage by getting sent off in the defeat to West Ham earlier this month.

The former Olympiakos man picked up two yellow cards — one for simulation, the second for a late tackle — and served a two-match ban for the subsequent games against Chelsea and Arsenal.

Mirallas had openly considered leaving Goodison Park during the winter transfer window in order to get first-team football and keep himself prominent in Wilmots' mind ahead of Euro2016 but he remained with the Blues and had hoped to force his way back into Roberto Martinez's side.

For now he will join Romelu Lukaku in the Belgium squad for the friendly in Leiria on Tuesday and will be pinning his hopes on getting some game time to impress his national manager.

Where do they get these ideas?

Barry McNally
2 Posted 24/03/2016 at 15:35:05
Wilmots must have been impressed watching him play against Ã–stersund FK on Sky Sports 17.
James Stewart
3 Posted 24/03/2016 at 15:58:50
He can get in arguably the best national squad around yet barely featured for his bottom half club. Says it all really.
Michael Neely
4 Posted 24/03/2016 at 16:06:17
If Mirallas had started more games for us then he would have been an automatic choice for Belgium. How Mr Martinez can't see that Mirallas and Lukaku should play together, I don't know. He is one of our better players and to consider letting him go would be ludicrous, but, alas it looks as though Martinez has no plans for him.

I believe the old adage "no player is bigger than the club" but then neither is the manager, in fact it's looking as though Martinez is not big enough, and maybe it's time for him to go instead. I for one would go along with that.

Shame he has joined other good players as a bench warmer, when he has such game changing qualities.

Yet another example of man mismanagement at our once-great club.

Because his petulant liability is still evident with him, I feel this will lead him to the exit during the summer.

He's 28, he's had no major injures, and he's been rested for almost two full seasons.

We could end up seeing Mirallas in his prime if he's given an opportunity.

Sounds like you expect a new manager sometime soon.... or are you just being hopeful?

On behalf of us ALL.

Gaz Lowe
19 Posted 25/03/2016 at 15:15:54
I will use this opportunity to comment on Kev and not use it as an excuse to have a dig at RM.. Kev has been poor for a few seasons and should go at the end of the season. He swans around like the club owes him something and I can't believe that people don't see this.

He's been sent off twice this season and looks like being sent off every time he plays. After the penalty situation he should have gone at the end of that season. Potentially a game winner but has often fallen short.

Take whatever we can get for him and spend the money on someone who wants to play for our great club COYB
Michael Neely
20 Posted 25/03/2016 at 21:56:47
Gaz, We must have been watching different players, Mirallas hasn't played enough in the last two seasons to draw those conclusions. He is without a doubt one of our best players and should be kept, and, played regularly.

We all on this site express our opinions and that for all it's worth is mine.

21 times isn't a bad shout when you've let the team down and been sent off twice and been banned for 5 games!! I can't deny his talent but unfortunately like many other players, his poor attitude out weighs his ability.