Blues gear up for international action

A significant number of Everton's first-team squad is in action during the current international break as World Cup qualifying and preparations for this summer's European Championships take centre stage.

Though Leighton Baines misses out after struggling to play consistently at club level this season, England stars John Stones, Ross Barkley and Phil Jagielka will all be hoping for playing time in Saturday's friendly against Germany in Berlin (k.o. 7.45pm GMT).

All three are looking to press their claims to starting roles when Euro2016 kicks off in June, either in tomorrow's friendly or the game against the Netherlands next week.

Many feel that one of the Toffees' form players, Aaron Lennon, should also have been on the plane to Germany this week and an infographic by Oulala based on Opta Stats suggests that they have an argument, particularly where the winger compares with Arsenal's Theo Walcott. 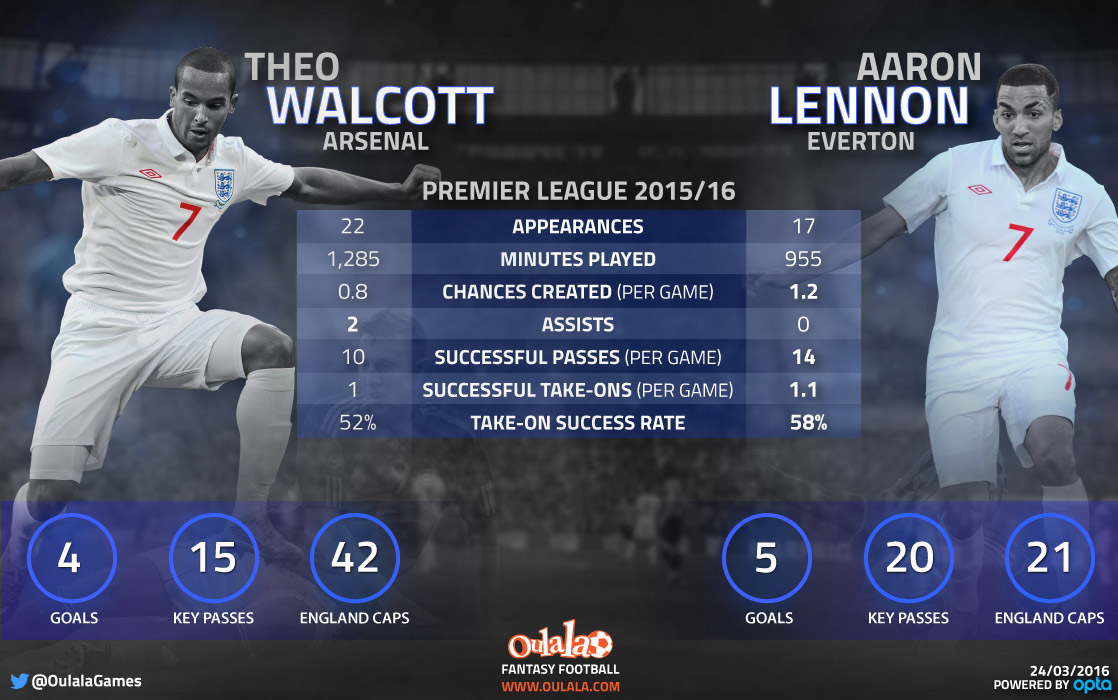 Seamus Coleman, James McCarthy and Aiden McGeady are in a similar yet differing positions for the Republic of Ireland. Coleman and McCarthy are usually among the first names on Martin O'Neill's team sheet but McGeady's international fortunes have mirrored those at club level where he lost his place in Everton's first-team squad.

The winger was forced to drop a division to the Championship earlier this year where has made seven appearances and scored one goal on loan for Sheffield United. He, too, will be banking on getting an opportunity when the Irish take on Switzerland (where the Irish could face Shani Tarashaj who has been included in the Swiss senior squad) and then Slovakia.

Darron Gibson, who has struggled on and off with injuries and poor form for years now, has not been so fortunate, however. He has dropped out of O'Neill's squad after he trimmed it from 40 to 33 players for this round of friendlies.

Kevin Mirallas is another player with eyes on playing time as Belgium play Portugal on Tuesday in the match switched from Brussels to Leiria following the terrorist attacks in Brussels earlier this week. He is on the fringes of Marc Wilmots' thinking as Euro2016 approaches for his highly-fancied team.

Romelu Lukaku, chasing the Golden Boot in England thanks to his prolific season in the Premier League, is looking to rediscover his shooting boots for his country. He has battled a barren goalscoring spell since before the 2014 World Cup in Brazil but his prospects of starting against the Portuguese will have been bolstered by injuries to Divock Origi and Christian Benteke.

Bosnia-Herzegovina will not be in France this summer for the European Championships after they were beaten by Ireland in the qualifying playoff but they have friendlies in Luxembourg today and in Switzerland on Tuesday.

Elsewhere, Ramiro Funes Mori has already been in action for Argentina, featuring in their important 2-1 win over Chile in Santiago last night that improves their record to eight points from five games in the CONMEBOL qualifying region. La Albicileste next face Bolivia in Buenos Aires on Tuesday.

Soon-to-be Colorado Rapids goalkeeper, Tim Howard, meanwhile has jetted out to Guatemala for the United States' next qualifying match in Guatemala City, with the first-choice keeper slot not yet firmed up in Jurgen Klinsmann's mind.

In Africa Cup of Nations qualifying, Senegal play Niger twice in the space of four days . Goodison new boy, Oumar Niasse, has six caps to his name so far and would add to that tally if he is selected.

Minik – well said. Too easy to forget him.

I remember he played a few games before he left and looked and played really well, very commanding, almost scored a couple from dead balls.

Maybe the Club knew Martinez was en route and wouldn't require someone like him.

Pity we haven't got him now! Lots of good defenders haven't/didn't have pace.

Just now, well the last 2 seasons, what would we give for a Labone, Shawcross type? Someone who could command the box, with positional sense.

He had a good chance when set up at edge of box, but he scuffed his shot across goal and just wide. Comfortable on the ball, he showed a lot more in his cameo than Niasse!

If Barkley, Stones etc can play well then we might be able to sell them after the Euros for big bucks. Then, a new manager can use the funds to build us into a top 6 team.

At the moment, for whatever reason, these players and Martinez are not the answer (we finished 11th in 2015, we are 12th so far in 2016). With the new owner, new transfer funds, and new manager, things will be looking a lot brighter for the 2016-17 season – that's my wish, for what it's worth anyway.

The rain isn't RM's fault, Raymond, but our appalling defence and 12th position are. Or perhaps they are down to the rain.