Lukaku on the mark for Belgium 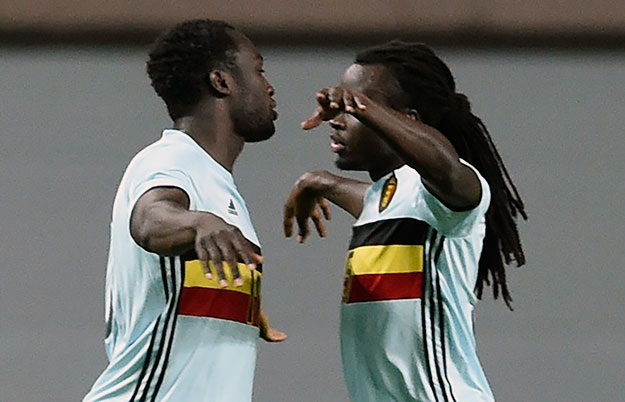 Romelu and Jordan Lukaku embrace after the striker headed home his brother's cross from the left-wing. FRANCISCO LEONG/AFP/Getty Images
Romelu Lukaku was in the Belgium team that took on Portugal in the re-arranged match in Leiria and he scored only his second international goal since the World Cup.

The 22-year-old nodded home a perfect cross from his brother Jordan who had come on earlier as a substitute to halve the hosts' lead in the second half.

The Portuguese held on, however, to win the friendly 2-1 thanks to first-half strikes by Nani and Cristiano Ronaldo. Kevin Mirallas was an unused substitute.

The Lukaku brothers spoke of a special moment for them after the match, one they will always be able to look back on despite the unfavourable result.

"Since childhood, from playing on youth teams, we've obviously had a dream of a time like this," Romelu was quoted as saying. "We're happy to have achieved this moment despite the loss; we've shared a highlight between us.

"It was emotional. My ultimate dream is to play with my brother in the same club."

"This is a huge moment for our family," Jordan explained. "My mother and father are super proud, there certainly were many tears.

"We trained a lot all week to achieve this kind of movement, and now it has been rewarded in the game. Good! It was a beautiful moment. Unfortunately, we lost so it did not taste the same but it will remain an unforgettable moment."

Meanwhile, James McCarthy was handed a start by Martin O'Neill's for this evening's friendly against Slovakia.

The midfielder was the only Everton player in the Irish starting XI after Seamus Coleman and Aiden McGeady played against Switzerland. McGeady did come on with 17 minutes to go but couldn't influence the result.

Two penalties for Ireland had put them ahead after Miroslav Stoch had gven Slovakia the lead but a Paul McShane own goal on the stroke of half time ensured that the teams shared the spoils in a 2-2 draw.

Elsewhere, Muhamed Besic and Shani Tarshaj met briefly as the Swiss took on Bosnia-Herzegovina. Besic started the friendly in Zurich which the Bosnians' won 2-0 thanks to goals Edin Dzeko and Miralem Pjanic while Tarashaj again came on as a substitute with 18 minutes left.