30/03/2016  [Jump to last]
Everton's recently-announced proposal to upgrade their Halewood training facility have been fleshed out more with the release of colour outline drawings of the plans.

The images show the location of the new accommodation block and improved pitch for Academy fixtures that manager Roberto Martinez see as vital additions to Finch Farm.

The "recuperation block", which will provide lodging for Academy and senior players alike will be constructed as an annex to the existing building complex while the new pitch will be located immediately to the left of the driveway next to planned groundsman's facilities. 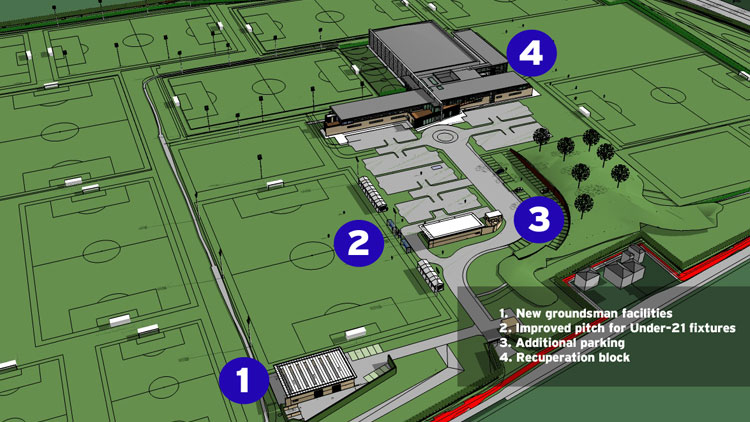 "All the work we're doing is for the rooms we're going to have for the players, a new recuperation and regeneration area and also a showpiece pitch.

"The seating area will be big enough for us to have games there. Regulations dictate that we need to have dugouts and some seating as well."

So what if Everton don't own it? I don't own my house but I still get to live there! They may buy it back but, in the meantime, it's progress. It's not a new stadium but it's a good move. Nobody died, for goodness sake! :-)

Finch Farm, not Goodison Park, is where the players and coaching staff do the bulk of their work. It is already an impressive facility.

These improvements further enhance it, which can only make it an even more attractive option to young players we are seeking to join the academy, or first team targets we wish to sign.

It is an investment in the playing side of the club, for now and for the future, regardless of who the manager is and regardless of whether we own the deeds to Finch Farm or not.

So a big 'well done' to the club from me.

So we can all head into a nice, calm, safe environment after home games... and weep loudly.

Paul Hewitt
17 Posted 30/03/2016 at 20:16:44
If we don't plan to buy it back, then why bother? Most businesses don't spend millions on a building they don't own.
David Barks
20 Posted 30/03/2016 at 21:02:39
Most businesses do not own the building they operate in, they lease it. This "not owning it" line is just ignorance, I'm sorry.
Peter Morris
22 Posted 30/03/2016 at 21:37:48
I'm sorry, but this obsession with ownership is misguided and irrelevant. It's the conditions of the lease that matter. If the club can occupy the land for as far ahead as any of us can look, and the terms are favourable, then fine with me. What would be the best alternative? Sink 㾻m into buying Finch Farm, and save, what, ٟm a year in rent? Or, invest the 㾻m in player development?

Most of the high value properties in Kensington and Chelsea are leased, and the very best retailers in the country frequently conduct sale and leaseback deals to raise capital to fund the expansion of their businesses. It's a perfectly normal and rational way to support any business undertaking, including a football club.
Shane Corcoran
23 Posted 30/03/2016 at 22:00:01
What's with the ownership problem?

When we had Deulofeu on loan, did we not care cos we knew he was leaving?

Everton use it. If they bought it, there'd be no material change to anything in any of our lives.

Plus, now all the lawnmowers I keep hearing about can be put to good use by the academy players as part of their chores.

John Dean
26 Posted 30/03/2016 at 22:26:02
This is really good news. Let's not cut our nose off to spite our club by rubbishing it.
Tommy Webber
27 Posted 30/03/2016 at 22:40:01
Anyone else feel like watching Everton is like watching a car crash in slow motion and we're all in it? FFS, we need to concentrate more on the training staff rather than the training field. Any chance we can get Ian Wright to join us to work alongside Dunk? (Shit, I'll settle for Wisey at this rate). I'd even have Moyes to sort out the back 4 if he didn't show his face so much.

When the exodus happens next season and we don't have Lukaku's goals to cushion us from the phenomenal drop, we'll be praying for a Ranieri of sorts to work his magic on us. Stating the bleeding obvious, I know, but we are on shaky grounds (new billionaire or not)!

Brian Sephton
34 Posted 31/03/2016 at 08:09:49
I love these dimwits who think because we don't own Finch Farm it is wasted but would happily see us rebuild Goodison Park with a loan of hundreds of millions...

They really should concentrate on their school work.

Our players don't need rest – they need to be drilled in defending.

The future of the club is in the quality of the facilities we have to train and develop players. We've been particularly good at development although we have the same struggle as many other clubs in getting the transition of developing players to the first team squad without weakening it.

Martin Mason
43 Posted 01/04/2016 at 12:25:53
Where can I hire a plane for my "No Finch Farm Upgrading" banner?
Tom Hughes
44 Posted 02/04/2016 at 11:09:55
Let's not rewrite history here. I think we all understand the relative merits and dangers of owning or leasing our facilities. I'm not sure how comparing with shopping outlets is relevant given that they're highly site specific businesses that have to fight for footfall on existing high streets.

However, we're missing the point. The fact is, first and foremost, the club already owned it's own facilities. The money they earned from selling it was a one-off payment that was originally partly earmarked for kick-starting the new stadium; that money has long gone and has left us with an additional outlay we didn't have before. I suppose we should all be thankful that Sir John Moores didn't go down the rental route in the '60s and invested enough in our previous "state-of-the-art" training facilities to allow the club to sell it (and the rest of our property assets) to survive under our previous owners... but let's not now make out that this was some great business move rather than a necessity due to poor management of the whole stadium issue, and a total reluctance to invest over many years.

Yes, improved training facilities are a good thing, but I'm not sure I'd elect to build an extension on a council house I didn't own... plus let's face it, when we had Bellefield and LFC had the wooden sheds and a few open air pitches at Melwood.... it was still them that were parading the trophies most years.

And how about a new kit sponsor since Chang only pays ٤ million a year...

And how bout EFC owning Finch Farm. And owning their own team store?