Hibbert back on the treatment table 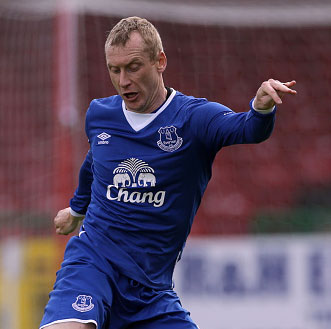 Tony Hibbert's brief return to first-team action is over after he suffered an ankle injury that ends his season following just one 45-minute cameo.

The 35-year-old was drafted back into the squad after 18 months on the sidelines for the match against Bournemouth 9 days ago and came on at half time for Muhamed Besic, earning good reviews for a typically tenacious performance.

He didn't figure at Leicester on Saturday, however, and it has now been revealed that he damaged ligaments in his ankle in training. He will now see a specialist to assess whether or not he will require surgery.

That could mark the end of his playing career with the Blues — Hibbert is out of contract this summer and is not expected to be offered another extension.

With Seamus Coleman ruled out of tomorrow's clash with Sunderland at the Stadium of Light, Roberto Martinez will again be without an experienced, natural right back. Perennially injured Brazilian fullback Fellipe Mattioni is also out of action with another hamstring injury.

Bryan Oviedo deputised for Coleman in the 3-1 defeat at the King Power Stadium following Besic's struggles in the role but youngsters like Jonjoe Kenney, back from a loan spell with Oxford United, and Callum Connolly are options.

Much like Steven Pienaar, it's a sad end to a good solid Everton career through injuries.

Or even play a 3-5-2 with Stones, Pennington and Funes Mori with Lennon and Baines as wing backs.

Or move Stones to right back with Pennington and Funes Mori in the middle.

Thanks for all you've done Tony, but this looks like the end. Go catch a big one lad!

Steve Hopkins
12 Posted 10/05/2016 at 18:14:55
Shame that that's probably it for Hibbo's career and shame that it still takes him at 35 and less fit than even Niasse to make our defence look a little more solid.

Probably played his last game for us. Good luck Hibbo... If only we had more players with your attitude at the club we may not be in the shite position we are in now.

Oxford won promotion & Jonjoe was one of their standout performers at (you guessed it) Right Back.

Ready made replacement, it was obvious after the last match that Brian Oviedo cannot play in that position.

Jim Bennings
16 Posted 10/05/2016 at 19:05:49
It begs the question with the cash we've spent over the last three years why no right back has been signed as cover for any injury/loss of form for Seamus Coleman.

Playing Oviedo there is a total joke and Stones is another that should never see the right back berth again.

We need to sign/bring through a new Tony Hibbert in my opinion, a real old school tough tackling bite yer legs defender that actually does what it says on the tin and DEFENDS.

Coleman for me has always been better going forward but never near Hibbert defensively and again I look at Coleman , out of the 6 season's he's had in the team he's only really shone in maybe two of those.

I think right back is a position we really need to look at bolstering in summer if we want to be improving on what we've witnessed the last two years.

Kunal Desai
17 Posted 10/05/2016 at 19:18:19
I just hope in the coming months and years we see a change in image of Everton under Mr Moshiri. No doubt the club will fall into his hands at somepoint. I just want to see EFC run as a corporate business and not some dead end tuck shop. The club is a laughing stock. The mentality of the people from the top has not helped one bit over the last 30 years. Its not just the management and playing staff that need a clear out. Senior management/executives in big decision making must also be told to clear off. Get those in with business expertise and acumen, those who have previously worked for global corporate businesses.

He did put in a shift in his only outing really, but, like some others, he is crocked and must be moved on

Signing Mattioni was quite ridiculous. Enough said on him.

Oviedo looks terrible at right back. He's looked a far worse player since signing his new contract to be honest. Anybody surprised by that.

For me give Connolly another chance or blood Kenny. We will only see how good they may be by giving them a chance.

Martinez has practically nothing to lose. Only his job and that's close to happening isn't it?

This is the spin Roberto put on Bryam going to WHU instead of us:

"Sam's situation was one where, as on many occasions, we were first to identify a good player in the Championship. We went through the correct procedures, established a good relationship with Leeds, but in the end it was not the right move for Sam or the right player for us and that was end of it for us. It wasn't right to bring a young talent in for the sake of it. It was not right for him and it wasn't a challenge he could embrace."

That's $400,000 saved per week & I have not mentioned
Henen, Pennington or any of the others already on the staff.

James @27 i believe these are the basics without bonus for games played & performances.

Maybe in a perfect world but are all those youngster's really what we need in a bid to try getting this club high up the table again.?
Likewise is it fair on young lads also to deal with the pressure of coming into the team if needed?

John Stones is a prime example of a young lad that's suffered badly with the expectancy levels, maybe he should never have been rushed into things if we had signed at least two experienced central defender's.

Sorry but everything feels exactly the same to me. Same old shit.

A la Game of Thrones:
And now his watch has ended.

I wanted to see the Hibbo riot, and not in a silly testamonial.

I was just pointing out the saving, which would mean we would have £400,000 per week to spend on top class players.

The youngsters I have mentioned would replace the over 30's without much difference in standard.

It's sad that Hibbert can't have a farewell game but time has caught up. The playing list is a bit tired looking age-wise with so many over the age of 32. These guys don't have the hunger of youth and are simply topping up their bank accounts.

Allied to the fact that we are getting piss poor returns on our merchandising - probably time for real change!!!

Play Connolly or Kenny, they deserve their opportunity.

Kieran Kinsella
45 Posted 10/05/2016 at 23:34:38
Why are we wasting time and money treating him? Time for the lame dog to get the old teller treatment.
Jim Bennings
47 Posted 11/05/2016 at 08:03:20
Garbutt actually did well when he was in our team last season, he played excellent in the win at Wolfsburg and had another few good performances at left back in the Europa League, it was somewhat surprising to see him at the age of 22 loaned to Fulham to be honest.

I think Garbutt should be here challenging Baines next season, he's a better option than Oviedo and Galloway played ok as fullback earlier this season but he started struggling there after a while, a centre half by trade.

As far as having 'some really good young players', I think you are looking through those blue-tinted specs again. The likes of Connelly, Galloway, Pennington, Browning et al may look okay on the occasional first team appearance but none of them are anything special and will have to be introduced gradually if they are to have a chance of making it. And, even then, the odds are that none of them will ever become Everton regulars.

Just look at the evidence. Taking Barks and Stones as young players who HAVE been given a chance, after more than 100 games between them, they are still the subject of intense debate about their value to our team. And both are England players !

No way, could any manager expect a team of Barkleys and Stones to bring success although having seen Niasse in serious action, it looks like massive transfer fees carry no more certainty of quality.

All in all, it's a fucking mess from top to bottom and most of us know it will take more than a few kids and a new manager to sort it out !

John Hall
50 Posted 11/05/2016 at 08:55:42
Next season should be interesting – new manager, only Under-21s left. Good luck to David Unsworth as the new manager... here's hoÑ€ing!
Martin Nicholls
52 Posted 11/05/2016 at 09:02:04
Anyone else remember Hibbert's performance in (half of) the 2009 FA Cup final? So bad he had to be substituted by Lars (who he?) Jacobsen. My thought at the time was I never wanted to see him in our shirt again and I suspect others felt the same. A little harsh maybe but taking off the blue tinted glasses, he was no more than an adequate full back - certainly not the "Everton great" that others portray him as. I and others have questioned the claim that we currently have the best EFC squad in 30 years instead listing names from Moyes' squads of 7/8 years ago - no-one has include Hibbo in their list! Enough said? Thanks and goodbye Hibbo.
Paul Thompson
53 Posted 11/05/2016 at 13:34:08
Play Kenny. No brainer. He's done well for Oxford is an actual right back.
Mike Berry
54 Posted 11/05/2016 at 14:59:49
Will be sad to see him go. He is old school. Think he will surface at Celtic along with Osman and Moyes
Steve Cotton
55 Posted 11/05/2016 at 15:34:17
Not bad work if you can get it 45 mins kicking a ball a season and 20k a week.
Tony Waring
56 Posted 11/05/2016 at 17:16:58
Martin (52). Hibbo was incorrectly carded in the FA Cup Final. Can't remember which Chelsea player fell over - most of them are pretty adept at it - but thereafter Hibbo had to be extra careful lest he incur a second yellow. All in all he has given great service to Everton, a proper full back with a good tackle in him and good pace. He should be taken on to the defense training staff in my opinion.
Kevin Turner
57 Posted 11/05/2016 at 17:51:32
Hibbo has been a great servant to the club over his career but I can't understand him carrying on. In fact I would be ashamed to collect my money if I had done diddly squat for god knows how long.

He's obviously over the hill and we should have either paid him off or taken him on in a coaching capacity (assuming he's worth that job of course). Just another example if we need one of how badly this club has been run under BK and RM.
John Graham
58 Posted 11/05/2016 at 19:44:57
Not a great player but a great blue who alway gave 100%. Always need his type in the team to keep the work ethic and gee up other players. Sorry but think now it's time to move on to the back room staff and show the players what being an Evertonian means.