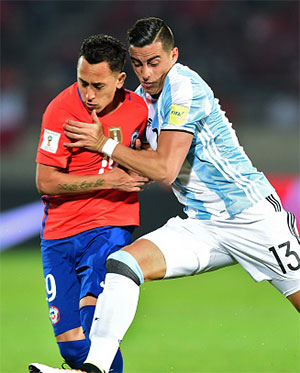 Argentina faced their neighbour and CONMEBOL foe Chile as they kicked off their Copa adventures in Santa Clara, California with a 2-1 victory.

Ramiro Funes Mori has been a regular started for the Albiceleste in recent months and played the full 90 minutes at Levis Stadium.

Lionel Messi played no part as he recovers from a back injury that forced him off against Honduras in a recent warm-up game but Argentina go the job done without him thanks to goals by Angel Di Maria and Ever Banega.

Chile grabbed an injury-time consolation that they hope will be useful if goal difference becomes a factor in Group D.

The game between two of the tournament favourites was one of the more eagerly anticipated match-ups of the centenary edition of the Copa America which is being hosted by the United States.

The US play their second game tomorrow against Bryan Oviedo's Costa Rica in Denver, Colorado, having lost their opener 2-0 to Colombia. Departing Everton goalkeeper Tim Howard did not play, with manager Jurgen Klinsmann preferring Brad Guzan, and Oviedo was an unused substitute in his country's 0-0 draw with Paraguay.

If he doesn't make, it's no disgrace; but think he will make a good centre half for us.

Kieran Kinsella
5 Posted 06/06/2016 at 22:32:13
I watched Uruguay v Mexico and people want to talk about English football. It was classic long ball hit and hope every time Uruguay got the ball. Both teams defended set pieces like Wigan. Pretty dire
Patrick Murphy
6 Posted 06/06/2016 at 22:41:34
Kieran (5) I too watched it and I really enjoyed the game, perhaps because of the atmosphere. I don't think either team played hit and hope but there was a tendency for both sides to clear their lines as quickly as possible. In the first half Mexico played some good joined up football and in the second period it was Uruguay who dominated for long spells. Overall it was a fairly entertaining game and much better than had been played up to that point in the tournament.

Are you watching the Argey Chile game? This is much better football. It's amazing to see the movement and passing coupled with speed. It's like watching Everton last year at double speed.

Brian Porter
8 Posted 07/06/2016 at 06:47:33
Kieran #7 yes, this was a game between two top class nations played with real fire and skill from both teams. I think we should remember that Funes Mori is now accepted as a regular starter for possibly the best team in the world while John Stones is struggling to be a regular for a very mediocre England team. Argentina's coaches are way beyond anything Martinez offered in terms of defensive coaching so hopefully Funes Mori will return to us a more complete defender than the one who played for us last season. He'll also gain further tournament experience in the Olympics which the South Americans take far more seriously than we do, perhaps because they have more of a will to win mentality than us.
Mike Gaynes
9 Posted 07/06/2016 at 07:10:18
Brian #8, I know you can't stop chanting the mantra about how Martinez "ruined" Funes Mori, but at least try watching the game a little. Didn't you notice anything about Argentina's backline strategy? Yeah, that's right. It's called zonal marking. Their system (like River Plate, Mori's old club), involves passing the man along to your partner instead of marking him across the penalty area. They don't use it much in England... most teams man-mark, with lots of physical contact. That's Funes Mori's weak spot... he's never really done it before. Roberto didn't do much of a job teaching him,, but nobody ruined him. That's simply the style he was accustomed to when he showed up.

So no, the Argentine coaches will not return him to Everton playing a better brand of man-marking after a summer spent in their zonal system. Fortunately, Koeman will be waiting to teach him a post-graduate course in knocking people out of the way to win headers.

Matt Ostnes
10 Posted 07/06/2016 at 13:58:48
It's all about the defensive system. Everton with MartÃ­nez played with a extremely deep defensive line with the 4 defenders and 2 defensive midfielders piled up in the penalty àrea.

Instead, in River Plate the defenders played near the midfield using the offside trap and trusting in the anticipation and positioning of Funes Mori and his teammates.

So, what I'm saying? Everton has a lot of talent in the defense but there is a MUST to have a goalkeeper that commands the area and a midfield line that actually recover the ball in the midfield

Mick Davies
11 Posted 07/06/2016 at 17:00:26
He will be working under a master of the art, and he's like Mountfield as he'll nick a few goals too
Mike Gaynes
12 Posted 07/06/2016 at 19:06:02
Matt #10, I think your point is a bit off-target. In order to play the high line that River Plate plays, in addition to blazing recovery pace at the back, you need a speedy keeper who is able to race OUT of his area, not command it. Barovero at River is a classic example of this... he covers the whole back end of the pitch. But he's also a Munchkin who couldn't reach a cross to save his life. He's less than six feet tall and 160 pounds. He'd be helpless against the high balls in the BPL. That's one reason no English teams regularly play the high line or the offside trap. And you will not see that with Koeman's Everton, because he doesn't believe in it and doesn't have the speedy backliners required.

Funes Mori will have to keep working on adapting his game to England, because Everton isn't going to adapt its system to him.

Jim Lloyd
13 Posted 08/06/2016 at 12:01:32
I think they will Mike, if not exactley to him, the new manager will very likely be changing the system. I think Ramiro will work in a different team set up, as will all the players. Let's see how he gets on the with a good coach working on all areas of the team.
Sam Morrison
14 Posted 08/06/2016 at 12:42:58
I know I'm in the minority but I have yet to be convinced by Funes Mori. I've seen him out-jumped many times in the box, and miss many attempted clearances. I like his confidence though, so I hope the new manager can eradicate the errors.
Loko Sanchez
15 Posted 08/06/2016 at 16:02:26
I'd rather have him next to Jags rather than Stones. Don't get me wrong, I'll still have Stones in my 1st eleven, maybe at defensive midfield role. Last season's troubles were not down to Funes Mori, he is an Argentine international for a reason.
John Graham
16 Posted 08/06/2016 at 17:26:48
I think he always looks like a player who lives on the edge. Tends to dive into a challenge and looks like there's a mistake waiting to happen.
Having said that he's also a very fast learner, puts his heart and soul into every match and in the right hands could become a very important player for us.
He deserves lots of respect for the way he's took to the premiership in his first year. Hopefully he will prove to us all he's a first choice next year.
COYB
Trevor Lynes
18 Posted 11/06/2016 at 18:02:08
Jags is still the most consistent at centre back and whoever plays alongside him will learn.

I hope that Stones moves in to defensive midfield as he would possibly be the best distributor of the ball.Funes Mori is also inconsistent and I am not fully convinced just yet.