If You Know Your History… Matchdays with EFC Heritage Society

The Church of St Luke The Evangelist – better known as St Luke’s – is where the EFC Heritage Society (EFCHS), founded in 2008, has been welcoming home and away supporters for the past two seasons. 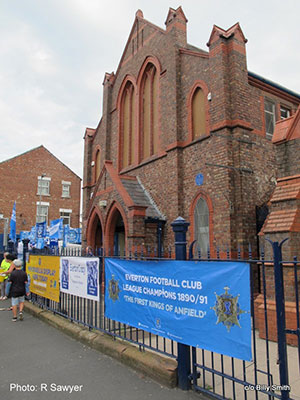 The Church of St Luke The Evangelist – better known as St Luke’s – is famously nestled between the Glwadys Street and Main stands. Whilst the church hall volunteers dispense pre-match cuppas to the Blues faithful on the ground floor, upstairs a dedicated band proclaims the gospel of St Domingo. For it is here that EFC Heritage Society (EFCHS), founded in 2008, has been welcoming home and away supporters for the past two seasons.

The banners adorning the fence outside proclaim Everton to be The First Kings of Anfield. As you then ascend the stairs you’re immersed in a sea of articles and images depicting events in Everton’s 138-year history.  Many hours of preparation go into the matchday offering and much of the credit for these displays goes to Paul Wharton, Richie Gillham and researcher Billy Smith (curator of the wonderful Blue Correspondent website which transcribes newspaper reports dating back to the club’s infancy).

There is often a theme to the displays exhibited. For the recent Stoke City match we celebrated the 50th anniversary of Alan Ball joining Everton. Visitors enjoyed seeing photos of the great man plus one of his England caps. Former left-winger Ronny Goodlass was on hand to promote an Alan Ball DVD in aid of his Health Through Sport charity, whilst tickets were on sale for the Ball of Fire play. A special edition Bally’s Boots t-shirt designed by Toffee Art for EFCHS was flying off the shelves as were the free “Alan Ball – 50 years a Blue” badges. Thomas Regan’s Toffee Art stall is always a big draw with his unique range of tee-shirts, coasters and much more. 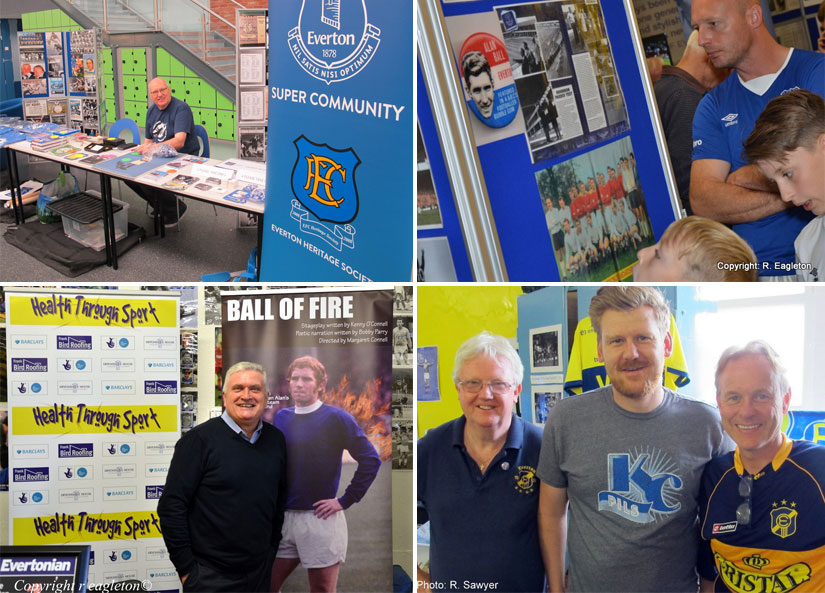 Visits by former players are becoming an increasingly regular occurrence. John Bailey and George Telfer were present on the most recent occasion - the latter supporting the Everton in the Community team.  The Ruleteros Society celebrates the links to our Chilean namesakes  -  a recently imported consignment of replica shirts was selling fast. Everton Supporters Trust is a regular attendee at St Luke’s, as is Phil Thomson, selling his book: The Holy Trinity and Beyond. Future book launch events include one for EFCHS founder David France’s Everton Crazy tome.

An extensive range of vintage matchday programmes and team-sheets is on sale by the Society, as are books, posters and other items of memorabilia. Bren Connolly always has some of his artefacts on display and sells items - many of them player-autographed. Crawford Miles, the Society’s sound and vision guru, lays on a presentation of goal footage from previous encounters with the day’s opposition. 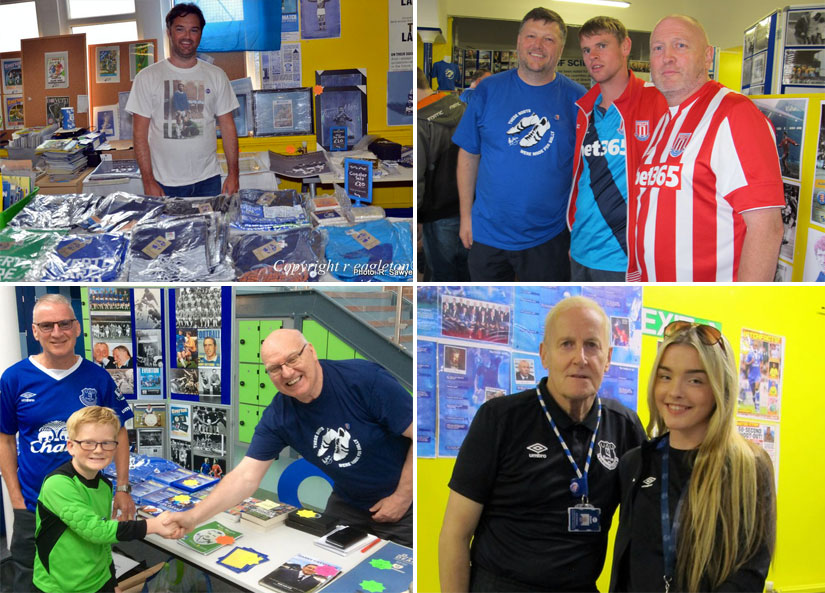 The Society fosters close links with historians at other football clubs and they kindly share with us images of players who have turned out for both clubs. It is always a pleasure to welcome supporters from other clubs as well as Toffees visiting from far afield.

This season the Society has expanded its pre-match presence.  Paul Kelly, aided by young volunteers, mans our stall at the Matchday Hub located in the Everton Free School on Spellow Lane. So, if you have not visited us before why not call by in either location? We are typically open to visitors from two-and-a-half hours before kick-off to thirty minutes before. You can keep tabs on us via twitter (@Evertonheritage) and Facebook (theefcheritagesociety) whilst our website: www.efcheritagesociety.com is due for a relaunch in the coming months. 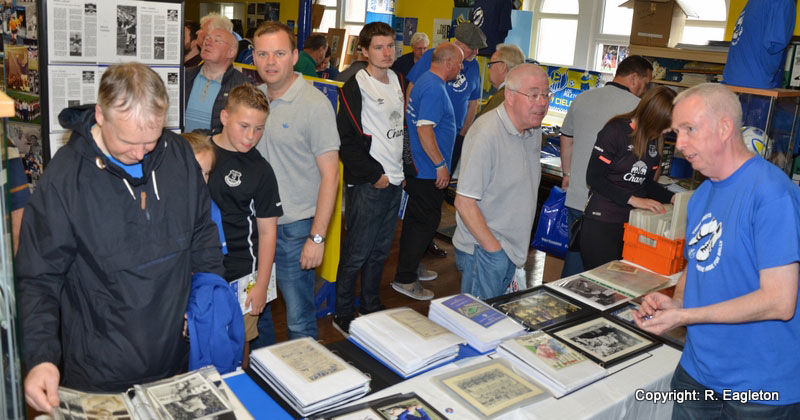 
Bob McEvoy
1 Posted 11/09/2016 at 10:25:12
Rob, I've asked this question a couple of times at the heritage centre and never received an informative answer. Do you know why Dixie's birthplace at the top of Laird St near St James's church does not have a blue plaque? I appreciate it's not the original building but seems to me Wirral BC are missing a trick. Wilfred Owen has got one.
Brendan Connolly
2 Posted 11/09/2016 at 11:47:09
Bob

One of our Heritage Society members, John Rowlands, has been looking into this. John is out of action at the moment due to a health issue, but will hopefully soon be back on the case. It's something John shares your passion on.

Simon Magner
4 Posted 11/09/2016 at 21:10:21
Also the home of Everton Supporters Trust and one of the Fans Supporting Foodbank's drop off points. We are there every home game. Come in and see us, bring some food with before the game!

Bob McEvoy
5 Posted 11/09/2016 at 21:52:47
Simon, it's some kind of local community shop but not the original building. It's my understanding that the family moved 6 houses down Laird St and ran a chippy, living above the shop when Dixie was a toddler. That property is still there. Any plaque could just as easily be mounted on the former chippy.
Peter Healing
6 Posted 12/09/2016 at 08:59:43
Do you still have the wanted notice board? I am after Mauritius tournament programme from 1993. I live in New Zealand. Cheers in advance
Simon Magner
7 Posted 12/09/2016 at 13:56:59
Bob, I'm going to try and find out for definite where this is now. According to Wiki, he was born at 313 Laird Street. There are a few houses left towards that end and on that side of Laird Street, but I suspect that the property is now the BP Petrol Station, or the demolished houses/pub on the land next to the Petrol Station. Unfortunately that road is pretty poorly ran down now.

I definitely agree though that he should be commemorated in Birkenhead somehow. Perhaps the better option would be to place a blue plaque on the house that he lived in when he scored his 60th goal?

I'm fairly sure the house is still there on Alderley Avenue in Claughton (as I grew up 3 roads down, and currently live a couple of roads up now!) and there is a great anecdote of him having a thigh injury going into the last game of the season, and the physio having to stay up all night to change the hot/cold dressings on his thigh (perhaps the physio should also be commemorated).