A 100 year-old Everton fan has been given the opportunity to live out a lifelong dream by stepping on to the hallowed turf of Goodison Park.

Jim Rogerson, originally from Waterloo but living in Barrow-in-Furness, was the guest of honour before kick off as he was presented with a commemorative framed programme, from the first game he attended, by Everton's leading post-war goal scorer Graeme Sharp.

The World War II veteran attended his first Everton game at Goodison Park 88 years ago at just 12 years-old. The fixture played on 1 September 1928 saw the great William Ralph ‘Dixie' Dean score his second hat-trick of the season in a 4-0 victory over Portsmouth.

Jim recalled “I remember leaving the ground and the fans talking about how Dixie could break the 60 goal record he set the season before.”

Over the years Jim passed on his passion for the Club on to his children and grandchildren and was delighted with being able to live out one of his dreams at the age of 100. 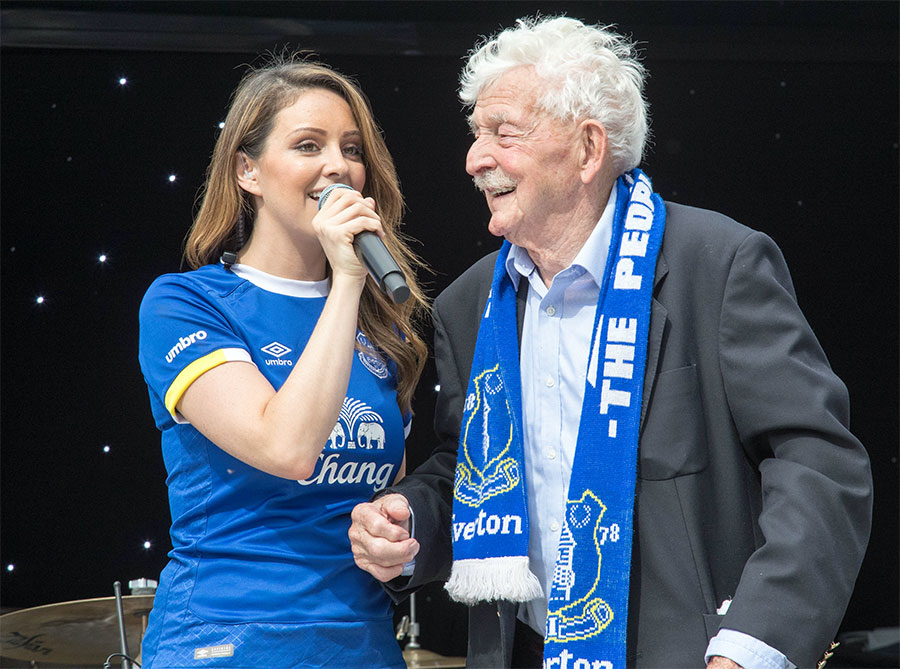 "It really has been a dream come true. I have been coming to Goodison Park since I was a boy and have always looked forward to it but today was extra special as I got to walk out on the pitch. I've not been able to come back much lately but every time I have come back it brings back fond memories of watching some true Everton greats play including Dixie Dean, Alan Ball, Alex Young and of course Graeme Sharp who I met today. Everton really are the People's Club and giving me and my family this opportunity is a big example of why.”

Jim brought his family to the game and was pitchside with his proud daughter Julie and nephew David.

David added “The entire family has been excited about today. From the moment we accepted Everton's generous offer to celebrate Jim's birthday he has had a new lease of life. It has been a truly memorable day and thank you to all at the Club who have helped make it happen.”

I thought I had been watching the blues for a long time – crikey, 1928 for his first game. Fantastic stuff.

No matter what money is floating around, what managers we have, what ambitions we have, and what it takes to get us there. These kind of stories & people are what makes a club. It's not hard, but it's priceless and everlasting.

I really hope that guy is in a final salary pension scheme â€“ he would have got his money's worth...