Everton legend Colin Harvey has given his approval to the latest phase of the Fans' Forum stadium branding project which has seen the Holy Trinity immortalised in the Upper Bullens.

Harvey, who played 388 times for the Toffees, was invited to Goodison Park to meet the Fans' Forum and get a first glimpse of the new artwork, which pays tribute to the famous triumvirate from the Blues' side of the late 1960s and early 1970s - Harvey, Howard Kendall and Alan Ball.

And having once graced the Upper Bullens concourse as an apprentice before his football career took off, the league and FA Cup winner felt that it was a fitting location.

“On a Monday morning, it was our job to brush up there after the home games,” he said. “It wasn't a bad job actually because you'd usually find quite a bit of money that had been dropped!

“The artwork came as a great surprise after those humbled beginnings. It's great to see and great for my grandson to come and see it as well.”

Jason Howard of the Fans' Forum is also pleased with the finished visuals, part of a project which has already seen artwork installed in the Park End, Main Stand and Top Balcony.

“It's been ongoing for about 12 months and we're starting to see the fruits of it now,” he explained. “The feedback has been really positive and hopefully we'll get more feedback from the fans as we go forward with the other branding projects in the different parts of the ground.”

Evertonians are invited to apply to become members of the Club's official Fans' Forum. Learn more and complete the application form. 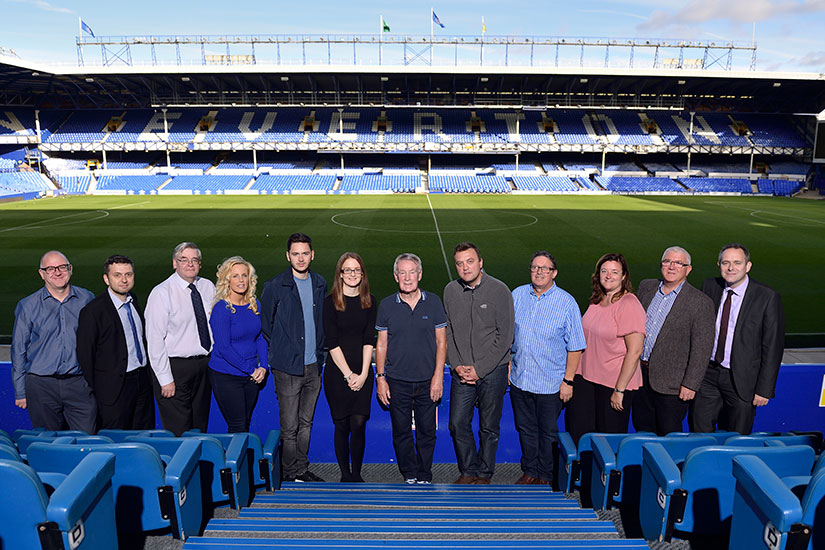 Stan Schofield
2 Posted 20/09/2016 at 20:53:23
Fantastic tribute to our great midfield trio Ball, Harvey and Kendall. I was in my teens when they were at their peak, and I feel privileged to have seen them gracing Goodison's turf.

I could never understand why they were not England's midfield. Although Ball played regularly for England, Harvey only got one or two caps, and Kendall wasn't picked at all! In my opinion, they were the best midfield combination in the world at the time, even taking into account Brazil's midfield trio of Gerson, Cloadoaldo and Rivelino.

I wasn't very good at footie, but I used to spend hours practicing ball juggling, just to try to emulate Colin Harvey's wonderful ball skills. No wonder we called him the White Pele.

This history needs to come with us to the 'Docks'.

Harvey was my favourite player of that era. Quiet, unspoken, skillful. Just got on with his job.

I remember just after we won the league in 1970 (and Harvey scored that cracker in the 2-0 win against West Brom that sealed it), we were on MotD, an away game, can't remember who against, and we were stroking the ball around majestically (there's no other word for it). The opposition couldn't get anywhere near the ball.

Anyway, the commentary fell silent for a while, and then Kenneth Wolstenholme suddenly said, "Oh, beautiful football from Everton. This is what they call the School of Science". So when that term is used, to us it really means something, and Colin Harvey is the epitome of it.