Everton's Under-23s lost 2-1 at Whaddon Road as two goals in the last 10 minutes turned the match on its head.

The Blues came into the game on a fine streak of form, with eight wins and only one loss across all competitions so far this season. They headed Group A in the revamped Football League competition (formerly, the Johnstone's Paint Trophy) that is sponsored this season by Checkatrade.

They beat Bolton Wanderers 2-0 back in August, and will play Blackpool at Goodison Park on Tuesday 8 November in their final group game.

And they got off a to a great start at Cheltenham's LCI Rail Stadium when David Henen fired in off the goalkeeper with just five minutes on the clock.

The home side would recover, however, and Mateusz Hewelt had to make a fine save just before half-time to preserve the lead after Oumar Niasse had seen his attempt to make it 2-0 cleared off the line with half-an-hour gone.

Antonee Robinson went close for the Blues in the second half but, with chances at a premium, Cheltenham suddenly struck through a Billy Waters header that levelled the game in the 82nd minute.

Three minutes later, Bassala Sambou executed a well-timed tackle inside the box to sweep the ball away from danger but was inexplicably adjudged to have pulled Dayton down in the box by referee Lee Probert and Danny Wright scored from the spot to make it 2-1.

The EFL Trophy is set up in 'Champions League' style and, controversially, features 15 other Category 1 Academy or 'Development' sides from senior clubs, each playing against three professional Football League first teams from League One or League Two in 16 regional groups.

Of the Premier League clubs, only 10 took up the offer to participate in this inaugural trial, forcing the organizers to invite six Category One 'B' teams from the Championship. Development teams are required to field a minimum of six Under-21 players in their starting eleven, while Football League clubs must field a certain number of first-team players. All participants must go by the club's proper name, i.e. not "Under-23s" in the case of the Premier League development sides.

The top two teams from each group will enter the Round of 32 knockout stage in the New Year, with the prize of a Wembley final on 17 April.


Michael Kenrick
1 Posted 03/10/2016 at 21:36:44
Interesting note to the highlights of the Bolton game, as featured on the OS Link above. The players are wearing what appear to be individual squad numbers in the range 41 to 67 (with gaps, obviously) yet, according to the the official website, most of these players still don't get squad numbers.

And it mentioned in the Echo that Niasse had finally been accepted by Ronald Koeman as a player in his senior squad, although he has still not been given a squad number.

Matt Butlin
2 Posted 03/10/2016 at 23:12:26
What chance of Niasse coming back from the brink and actually contributing something this season? He must have something about him, surely.
Alan J Thompson
3 Posted 04/10/2016 at 04:39:22
I think a competition where younger players get the experience of and opportunity to play regularly and with some first team squad players can only do good especially as all of them can't go out on loan.

As for Niasse, Everton may have paid well over the odds for him but, as at least two clubs have spent money on him, he at least deserves an opportunity to show why.

If that's a penalty, I give up.

I thought the lads were the better side tonight & were unlucky to lose. First time I have seen some of these players tonight, including Liam Walsh. I have to say what a player he is, highly impressed! Great touch balance & quick silky feet. Without going too over the top, the lad at times looked Messi-esque the way he glided past players, I hope we get to see him in the first team in the future. Only a slight fella but it didn't seem to hold him back tonight.

Joe Williams was another lad who caught my eye, I thought he had a great game & was involved in a lot of Everton's play.

On tonight's viewing, I don't think Niasse has a future at Everton, he just doesn't look up to standard, even against a League Two Cheltenham side. Plenty of signs for optimism from what I saw tonight.

How the hell can the ref give a penalty for that?

Oh, and some brief time afterwards, the Cheltenham player was shot by an unseen sniper, causing him to fall (incorporating hair-stretch).

He's still eligible for the youth team this season so this game was a promotion for him.

Dare I say it – he played a little similarly to Idrissa Gueye, although he didn't seem to get forward as much. Like Joe Williams, he was heavily involved in the game.

It's a shame these lads didn't deserve to be on the losing side last night. The whole team played with so much confidence, it was a joy to watch & well worth the fiver admission.

Seems it might be on fubo.tv – has anyone shelled out for membership of that site?
Paul Turner
24 Posted 05/10/2016 at 19:25:52
I managed to miss our goal due to the queue at the turnstile... I thought Walsh was terrific, Niasse not up to Premier League standard (sadly for him), Robinson and Foulds also impressed.

I was in the paddock in front of the main stand, so didn't have a clear view past the dugouts of the penalty incident, but chatting to local fans after the match, they didn't think it was a pen either!

A win against Blackpool shouldn't be beyond our lads, though... COYYBB! 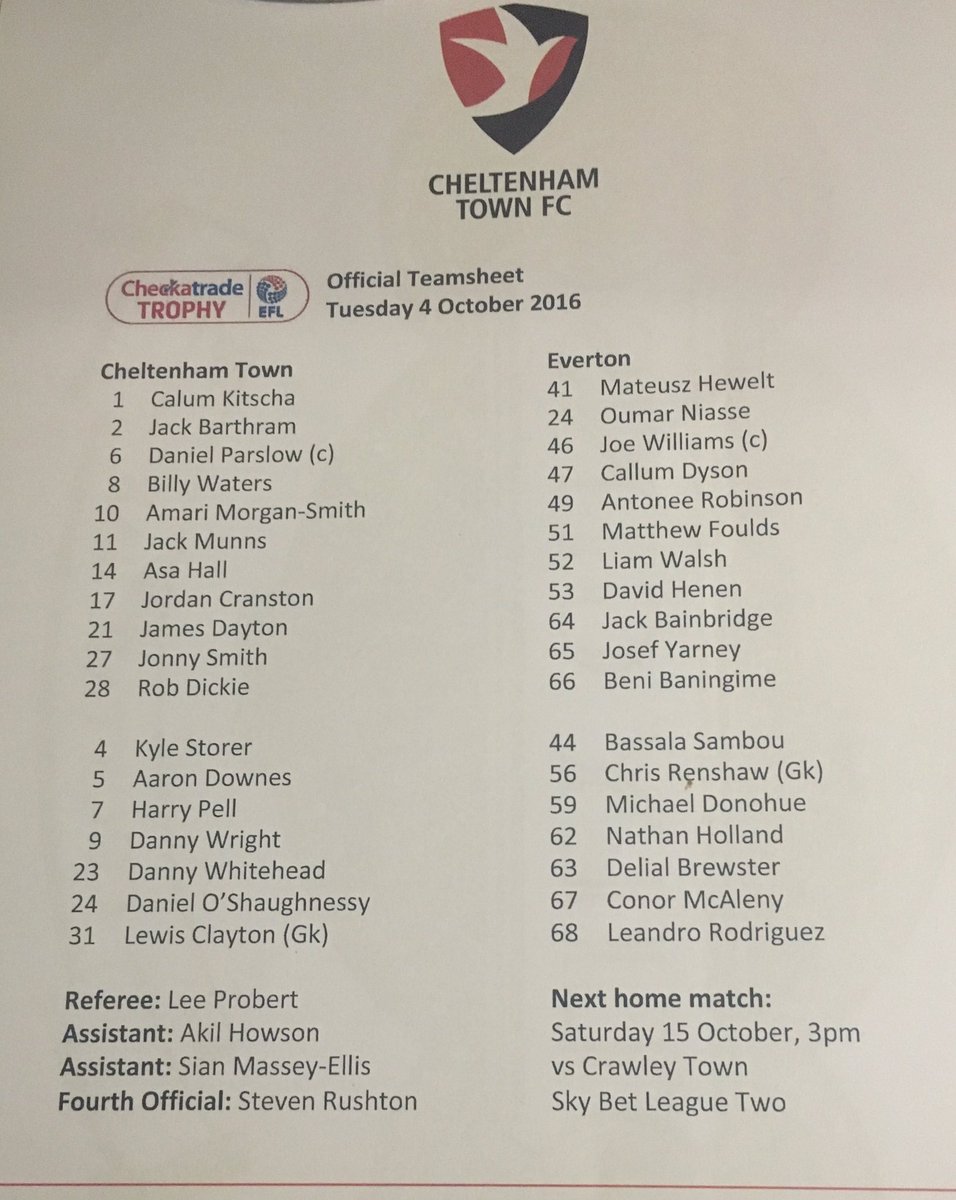 Note that Niasse was wearing #24. We had Sharni Tarashaj wearing #24 before he went off on a season-long loan at Eitracht Frankfurt.