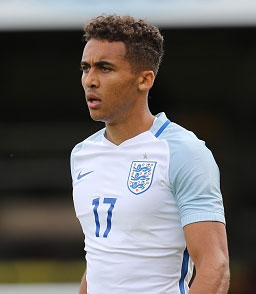 Getty Images
Everton's younger England representatives have had a successful week, with Dominic Calvert Lewin on target for the Under-20s last night.

The recent signing from Sheffield United scored what proved to be the two decisive goals in England U20s' 3-1 win over Germany in the second match of this month's four-nation tournament.

Calvert-Lewin, playing alongside his Toffees team-mates Kieran Dowell and Callum Connolly, netted twice in the second half.

England had opened their account in the tournament with a 2-0 win over the Netherlands on Wednesday in which Dowell started and Calvert-Lewin made a late substitute's appearance.

The Young Lions play their final game on Monday against the United States.

Meanwhile, Brendan Galloway and Mason Holgate both played the full 90 minutes as England's U21s booked their place in next year's European Championship Finals with a 1-0 win over Kazakhstan.

This lad looks a real steal. I think we have definitely got ourselves a star in the making!

And if Lukaku is fit, I would give Barkley a rest and play Calvert-Lewin up top with him. The young lad has been brought in because he is a talented player, so get him in and let's have a look.

He's nowhere near Premier League standard, and his goalscoring record at Sheffield Utd wasn't great as he didn't get many starts, ie, he has little experience. We bought him because he has promise and can be developed, allow the kid the time he needs.

He can't do any worse than Kone and Valencia, though tbf, he hasn't had much game time.

Don't let the depressives drag you down!

Is there any future for Kone or Niasse? No, of course not... so why not do something bold? Or take a chance on Henen. Or Dowell. Or just accept mediocrity and a defeat.