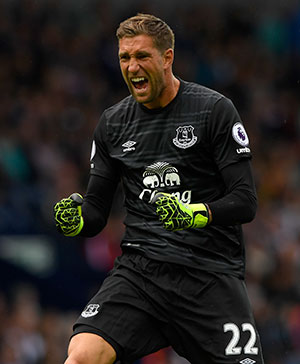 Ronald Koeman is in no hurry to address the first-team goalkeeper situation at Everton and he has hinted that it will be next summer at the earliest before he tries to round out his choices to three senior players.

The Blues' manager had suggested over the summer that his preference was to have three keepers on the books but in the end only Maarten Stekelenburg arrived in a cut-price deal from Fulham via a loan spell at Koeman's former club, Southampton.

Stekelenburg has been in fine form since joining be club, with his display against Manchester City last Saturday earning him rave reviews on the back of two penalty saves and two other spectacular stops to keep the league leaders at bay.

That has reduced the urgency for Koeman to sign a new long-term goalkeeper, even if it means that he is one short of his preferred complement with just the 34-year-old Stekelenburg and Joel Robles in the squad, and he has reiterated that he has no immediate interest in Joe Hart despite continued press speculation to that effect.

"I am happy with two goalkeepers,” the Dutchman said. “I want to have a situation with three first team goalkeepers. That is the decision we need to make, but I don't know if winter is the right time to make that decision for next season.

“First of all if you can get a good goalkeeper in the goal and he's very good with his feet then he'll be the best,” Koeman continued, describing his ideal goalkeeper signing, “but if I have to choose one of the two I choose the goalkeeper who will save and not with the ball at his feet.

“I am talking generally. The goalkeeper's job, in my opinion, is the most important. If you can have one that is good at playing from the back that is perfect. Maarten's quality is he has both.

“He is a good goalkeeper at the back, with a good touch, but I always tell my defenders and goalkeepers: ‘Don't take too many risks building-up close to the goal or the box'. I hate that.”

Lack of quality options in attacking positions. That's what we need to focus on.

As Chris says, he has got us several points already and seems to have it all with feet and coming for it from set-pieces, so what a steal he is.

Very good signing. At his age, probably only a stop-gap though. I'd love to get Forster or Butland rather than Hart, not that Hart would be a bad acquisition either, but Stekelenburg has been so good that I'm not worrying about it.

Darryl Ritchie
7 Posted 22/10/2016 at 22:19:37
Goalkeeping is way down the list of things that have to be addressed. Stek is probably only a stopgap, but has only made one shocker thus far. I don't think any other player can say as much.
Daniel Taylor
8 Posted 25/10/2016 at 01:46:26
Nos 2, 4 & 6 â€“ hang on a minute, are we talking about the same bloke? He was majorly at fault for both goals on Saturday, the first one was a disgrace and the second nearly as bad. Why pull yourself away from diving for the ball?

There is no good in saving 1 point at Man City if you are gonna throw 3 away at Burnley â€“ do the maths!

Top teams have top keepers; would you have swapped Southall for anybody else??

Daniel Lim
9 Posted 26/10/2016 at 07:58:52
Finally one opinion that's different from the rest. Same as Daniel (#8), I do think the first goal was really a schoolboy effort. I still have not watched the second one. Probably don't want to.

Besides this, he also was awful in one of the matches. Don't want to repeat like a broken record.

By the way, Darryl (#7), a genuine question: Which goal are you referring to as "shocker"?