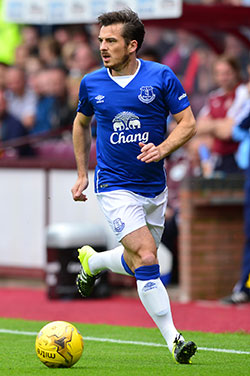 Ronald Koeman was hopeful that Leighton Baines would resume training again this week after requiring more time to rest a hamstring injury.

The fullback had been pencilled in to face Manchester City earlier this month but was absent from the squad that travelled to the Etihad and he missed the trip to Burnley last Saturday as well after feeling discomfort following a behind-closed-doors friendly at Finch Farm last week.

Baines was considered doubtful for this weekend's visit of West Ham United but Koeman will likely be questioned about the 31-year-old's availability at his pre-match press conference.

“I hope he will do some training next week and maybe he can be ready for the weekend,” the Dutchman had said after the defeat at Turf Moor.

UPDATE Baines and McCarthy are ruled out of Sunday's game against West Ham, both with hamstring injuries.

Richard Dodd
3 Posted 27/10/2016 at 14:25:57
And had we won TWO more! But we didn't and have generally looked a poor side in the last five games. I rather think it will take more than Leighton's return to see us on the up!
Chris Williams
4 Posted 27/10/2016 at 14:29:53
It would be good to see a good performance in both halves for the first time this season with a fast start and not conceding first.

Would you swap our Ronald for their Ronald? Not sure I would.