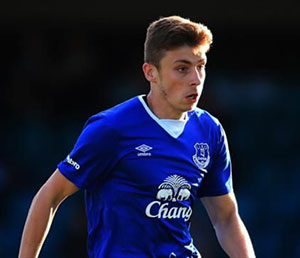 Everton Under-23 prospect Joe Williams has had his progress checked by another injury, David Unsworth has confirmed.

The midfielder, who has come through the ranks alongside the likes of Tom Davies, has long been considered a potential star product from Everton's Finch Farm Academy and was looking to get back to action after spending the summer in rehabilitation from damage to the lateral collateral ligament in his knee.

Unfortunately, however, Williams played in a behind-closed-doors friendly against Wigan Athletic — likely the same one where Leighton Baines felt lingering pain in his troublesome hamstring — and suffered a different knock, this time to his ankle, that Unsworth says will sideline him for another few months.

“Unfortunately Joe picked up a knock against Wigan a couple of weeks ago,” the U23s' boss told evertonfc.com. “He had started his comeback and was looking great. But unfortunately in that Wigan game he has taken a knock and it is a different injury.

“It looks like he is going to be out for a few months now. He is not having much luck at the moment but he will work hard in the gym and he will be back before we know it.”

Koeman wants top experienced players in, which is great but our good prospects will never get a game!