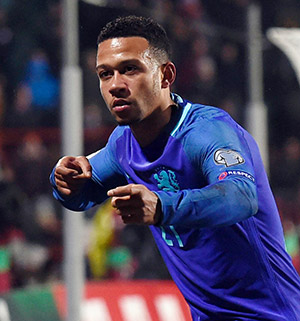 Ronald Koeman has indicated that Everton will be active in the transfer market in January but said there has been no official approach made thus far for Memphis Depay.

Depay is out of favour at Manchester United under Jose Mourinho but scored twice for the Netherlands in their 3-1 victory over Luxembourg and Koeman, who featured in a number of interviews over the international break, was asked about his compatriot.

His suggestion that he would be interested in signing Depay has been taken by some media outlets to suggest that a move for the winger is in the offing but Koeman played down the speculation.

“What I don't like is… ok, I was asked a question [about a player] but the player is with Manchester United. Of course, if there is any possibility [of signing Depay] then, of course, I am interested because I was already interested when I was the manager at Southampton and that has not changed since two years ago.

“But we need to wait, we need to prepare ourselves, and, of course, we will do some business in January but no [there has been no contact between the two clubs].”

Think back 5 years ago to dreary Davy without a penny in his pocket after Christmas, how times have changed and how lucky we are.

If we only ever bought players who were being brilliant elsewhere we'd be priced out of the market. At 22, a Dutch international, hugely highly rated, and available after one poor season at United... it's not a bad risk to take.