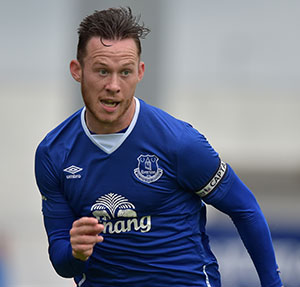 The Liverpool Echo claim that the 21-year-old has been offered the chance to play for the Socceroos despite having represented Wales at U17, U19 and U21 levels.

Jones, an established member of David Unsworth's team at Finch Farm and often the captain of the Blues' second string, was born in Perth in Western Australia but is regarded by Wales as a player for the future, one they would be loathe to lose.

My fear is that the club spends aggressively in the January and Summer transfer windows and these boys never get a chance.

They look like they could all hold their own in the 1st team now never mind the bench, where none of them have appeared of late, no matter how bad the 1st team are playing.

What's wrong with blooding one or two in each game, even off the bench. They could not be any worse than some of the present first-teamers.

Dave Abrahams
4 Posted 30/11/2016 at 19:33:36
I said a couple of months ago that, with seven players allowed on the subs bench, where was the harm in putting at least one of them on the bench each week, just to get a feel of being around the first team.

I also said that if the team was 3-0 ahead with 20 minutes to go one of the players could use the 20 minutes; what fanciful thinking that turned out to be.

Nevertheless some of these young lads should be fully introduced into the first team squad sooner rather than later.

Do we run a back-to-work scheme in the evenings to teach them other trades for when their contracts finally expire?

As badly as our first team have played for the past three years â€“ under both managers â€“ if any of these jokers were good, they'd have had a look-in.

People say "they're not given a chance" but we heard how wonderful McAleny and Garbutt were for years... now they're 23-year-old wasters on lower league benches, just like Lundstram and Kissock before them.

The club wants to make sure it doesn't miss out on late developers. It's not like their wages make a dent compared to first teamers so why not give them some more time if they look like they might have something?

Ian McDowell
8 Posted 30/11/2016 at 20:40:00
Sam, England recently selected Antonio of West Ham over Barkley and Wilshere for England. That should tell you everything that's wrong with English football.

I don't rate the coaches, we don't have the facilities at grass roosts level of top European nations. and we appoint managers such as Hodgson, Fat Sam and now this failure in Southgate.

Let's be honest â€“ the youth could not do any worse than the current wasters, could they? Problem is, we have a crap manager who won't play them.

I'd be happy if Koeman left.

Gavin Johnson
10 Posted 30/11/2016 at 21:38:03
We're not going to know until some of these lads play. Up to now. Davies, Holgate and Galloway look like the ones who are 1st team ready. The three of them should be in the 1st team now ahead of Barry, Jags and Barry going off Sunday's showing. I really hope Galloway gets game time on his return.

That all said, I can understand caution on one level because there was a bit of a campaign on TW to get Garbutt in the 1st team, but the lad was over hyped and has found his level struggling in the Championship. The lad looks like he can hit a dead ball and pick a pass on the little I've seen. But he's weak defensively.

Maybe I'm unfair cos I think he's had a few niggling injuries that have scuppered his chances of a sustained run at Fulham, and now Wigan.

Tbh, I'm not that concerned that Galloway has been snubbed by Tony Pullis. He's a very conservative manager. My worry would be that Koeman is always going to be safety first and keep the 30-somethings in the side.

I'm not sure the other prospects like Dowell, Walsh and Kenny are ready for 1st team starts like the aforementioned prospects, but they should be getting the odd run out from the bench.

We didn't let Baines "go" he had a trial as a tween and was passed up. Jags had been and gone by aged 15. Hardly comparable with a 23-year-old.

Dier was never an Everton player he was bizarrely loaned to the academy as a Sporting Lisbon player even though it was said at the time there was not an option for a permanent deal.

Mustafi left as he couldn't displace the first choice pairing at the time. No one ever said he wasn't a good player.

There are plenty of clubs looking for good loanees and players and I don't see any sign that our U23 lot are in demand.

'Excited to be the franchise owner of @HelloGoodnessUK #RoseLane come down for healthy food, juices & smoothies'

Doesn't look as if he is currently playing at any level for Everton... although still down as being in the U23 squad on the Everton website.

"Having been on Everton's books as a teenager, Baines eventually joined Wigan's youth set-up and made his senior debut at the age of 17."

I never get to watch the kids but the likes of Davies, Holgate, Dowell, Garbutt and Galloway seemed to look useful on their appearances on public view via pre-season or rare Premier League outings.

Jones I've never heard of but, were I he, I think I'd opt for Aussie over Brentford!

Mike Gaynes
16 Posted 01/12/2016 at 15:33:06
Ian (#8), not sure about your point, but I'd say choosing Antonio over Wilshere and Barkley is an obvious and overdue choice for England. He's by far the superior player to either of those two.

Ian (#12), I'm curious about McAleny too. He looked the real deal in the glimpses we got after he came back from the broken leg, but you're right, he's not appearing at all now.

I read an actual interview with Baines in which he said he supported Everton as a kid, had a trial but wasn't picked. He then had a trial with Liverpool who liked him and seemed set on a deal. He was "devastated" they decided not to sign him up. He thought that was it for him but at 14 he was signed up by Wigan. I suspect the Only Everton site writers are just inept or muddying the waters.

I think he had trials for both Everton and Liverpool as a young teenager, but could not confirm that he ever joined the Everton Academy (ie, was "on Everton's books").

Anything you can find (perhaps at the Blue Correspondent?) could help us fill out his ToffeeWeb Profile. Thanks!

The Blues' new signing turned up to watch the warm-up match with the Germans, while still on Wigan Athletic's wage bill, alongside England Under-21 pal James Vaughan.

“I watched Everton's recent friendly with Werder Bremen with Vaughany” he admitted “hopefully there will be a lot more European games like that this season.

“Europe is always something you are looking for as a player, and something I am happy about because you need that European experience to help you progress on to the next level.

“Everton had a good season last time out, the lads did really well so hopefully we can build on that, get into Europe again and have a decent European campaign.â€

Baines, from Kirkby, was a childhood Evertonian and added: “I am very happy now it is all done and I am looking forward to getting on with it all here.

“People knew this was the place I wanted to come and I am glad now that it is all done.

“I am a local lad and all my family support Everton so it's good to be here at last.â€

Baines has now returned to a club who rejected him when he was just 12 and is the second player Everton have signed this summer who was shown the door as a youngster, following Phil Jagielka on a return ticket to Goodison.

All we are saying,
Is give youth a chance.

Adam Fenlon
24 Posted 02/12/2016 at 04:14:42
The story sounds a bit off? I know Australia aren't a top football nation, but they surely don't want to pick in the senior squad, a bloke who effectively hasn't played senior football anywhere? 6 games on loan to Plymouth only.

Best of luck to the lad though of course - as a Socceroo or otherwise.

McAleny is playing for Wigan Athletic on loan.