Everton forced to drag themselves back for another draw 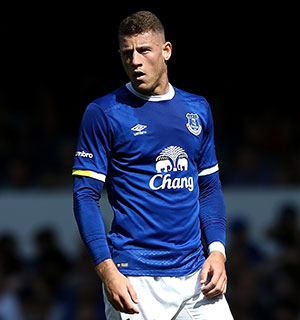 Everton twice came back from a goal down but had to settle for a point again as the league's bottom club dug in for a draw.

Set-pieces were again the Blues' Achilles heel as Michael Dawson capitalised on flat-footed defending to ram home the opener and Robert Snodgrass restored Hull's lead in the second half with a direct free kick.

In between, David Marshall's own goal had brought Everton level on the stroke of half time but Ronald Koeman's side couldn't find the breakthrough to take the lead themselves.

The visitors' persistence paid off six minutes from time, however, when Ross Barkley headed home and substitute Dominic Calvert-Lewin almost pinched the points but his late header flew the wrong side of the post.

Presumably with three games in the space of a week in mind, Koeman had made three changes to the side that started the win at Leicester on Boxing Day, dropping Ramiro Funes Mori, Aaron Lennon and Mason Holgate back to the bench.

Phil Jagielka returned in defence, Gareth Barry continued in central midfield and Enner Valencia came in as a wide forward but the Blues made a poor start, giving up a sixth-minute corner. That was initially cleared but it was sent back in by Snodgrass to Dawson behind Barry at the back post to drive past Joel Robles.

Everton responded and after Marshall spilled Kevin Mirallas's shot, Seamus Coleman planted a header onto the post, Barkley dragged a shot a yard wide of the far post and Barry lashed an effort inches past the other upright.

At the other end, Deumerci Mbokani came close to notching his first Hull goal but couldn't connect properly with another delivery from the right flank but Koeman's men eventually got their equaliser in first-half stoppage time.

Mirallas's corner put Marshall under pressure and as he collided with Mbokani attempting to punch clear, the ball went in off his out-stretched arm to send sides into the break at 1-1.

The “woodwork” would foil Everton again three minutes after half time when Marshall palmed Romelu Lukaku's shot onto the crossbar and Barkley had a decent chance when he raced onto the Belgian's flick-on but he shot too close to the ‘keeper.

Shortly afterwards, Snodgrass sounded a warning when he rattled the bar with a curling free kick after Barkley had been penalised for a foul. Nine minutes after that, the Scottish international lined up a direct shot to the other side of the goal, one that Robles couldn't keep prevent from hitting the back of the net to make it 2-1.

Throwing on Tom Davies and then Calvert-Lewin to chase the game, Koeman was initially frustrated when Marshall beat Barkley's shot away and a shout for handball on Jake Livermore was ignored by referee Jonathan Moss.

However, the second equaliser eventually arrived when Baines curled a cross in from the Everton left and Barkley was on hand to nod past the ‘keeper and set up the prospect of a grandstand finish that didn't really materialise.

Coleman picked out Calvert-Lewin with a 90th-minute cross but though the youngster got between two defenders well, he powered his header agonisingly wide.

The result leaves Koeman still searching for successive wins for the first time since September and represents a missed opportunity to close the gap on the teams above them who were seven points away coming into the weekend's games.