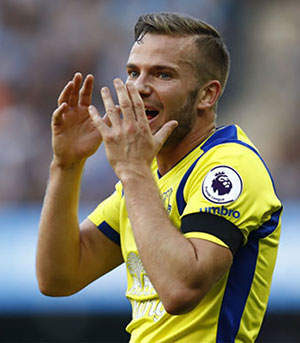 Tom Cleverley has been linked with Newcastle and Watford this month but, like James McCarthy, is unlikely to be released on loan
Everton are not interested in allowing either James McCarthy or Tom Cleverley to leave the club this month unless enticed by permanent deals according to a local report.

Both midfielders have been the subject of speculation linking them away from Goodison Park this window, with Cleverley a rumoured target of Watford and Newcastle United while both the Magpies and Aston Villa have been credited with interest in McCarthy.

However, with Idrissa Gueye on international duty until the end of January at the earliest and Muhamed Besic not expected to be fit following a long-term knee injury until next month, Ronald Koeman has no incentive to let any of his remaining central midfielders to leave.

A cash deal that would allow him the manager to invest in a replacement might change the situation but potential suitors may be put off by the potential price tags that the Blues would put on the players.

McCarthy, in particular, would likely prove expensive, particularly for Villa but the Liverpool Echo are suggesting that the Blues will not consider a loan option.

The Irishman is currently recovering from a recurrence of a hamstring problem but has been used frequently by Koeman this season when fit and was impressive on his last full outing against Arsenal last month in a 2-1 win.


James Stewart
1 Posted 10/01/2017 at 17:34:22
Sounds suspiciously like sell-to-buy is still prevalent in these parts.
Steavey Buckley
2 Posted 10/01/2017 at 17:42:07
Newcastle sold players in excess of 60 million pounds in the summer. So are in a position to pay the asking place Instead, they want Everton players on the cheap.
Guido Blumberg
3 Posted 10/01/2017 at 17:55:49
When will James McCarthy recover from his injury? It is the longest injury in history. He always has injuries and can never play. Like other players in the squad, he earns a good salary without playing and without contributing anything.

Tom Cleverley is a nuisance. I still do not know what he's doing on the team. Also we can not sell him because he is so bad that he has no value. It's a problem.

All the tippy tappy football Martinez introduced resulted in back passing, which resulted in McCarthy complying with the managers philosophy.

Numerous injuries have caused a halt in his progress under Koeman.

I would like to see him stay and show what he can do.

There are others ahead of him at the exit door.

Brian Furey
5 Posted 10/01/2017 at 18:21:25
I think the way Barry has been losing his place it looked like McCarthy was beginning to step up to the mark and I do think Koeman rates him after all.

I think it's only a matter of time before he gets Schneiderlin in. I'd like to see a few more attack minded goal scoring players come in. Deulofeu will only ever be a bit part player as will Mirallas.

I don't see why he can't throw Lookman in right away.

That would suggest to me and my embryonic understanding of FFP, that the fees for incoming player bracket we are looking at is okay but we have issues with wages.

For me, again if the club wants to show ambition and not the penny pinching attitude that has prevailed for many a year we do some thing radical.

Cancel the contract of McGeady, Kone, offer Cleverley on a free. We got him for nothing. Free up the space and go buy our targets.

Way too radical for Everton.

Dave Williams
8 Posted 10/01/2017 at 19:45:29
The club is a business and, regardless of how much Moshiri is willing to throw at it, we have to be sensible and sell players who are surplus to requirements.

I don't understand the fine points of FFP but we would breach regulations if we spend a load and don't recoup a good slice by selling. Our buys to date under Ron have been more or less covered by sales but 㿂m for Schneiderlin will take us closer to our limit under FFP so it is only good business to look to sell the dead wood.

Charlie Lloyd
9 Posted 10/01/2017 at 20:15:12
The model needs to be sustainable. Moshiri has quoted this. He will not just chuck £100m at it and incur issues with FFP. However he has bought off the debt and commercial deals recently announced will all help.

Rome wasn't built in a day. Neither will a ground at the dock site but the club is making upward moves.

Cleverley however, even though he has played out of position and bit parts can't help his form. I think it would be unfair to hold him back to just sit on the bench. Loan with an option to buy it has to be. A loan for the sake of it doesn't help us at all.

Prices are ridiculous these days. If you can't beat 'em,,,,,,

Terry Underwood
12 Posted 11/01/2017 at 13:04:33
Can't understand all the moaning about having to "sell to buy." No business, however rich, likes to waste money, how do you think they became rich in the first place? Also, we are not in the business of collecting central midfielders. And there is the restriction on squad numbers to be considered
John Pierce
13 Posted 11/01/2017 at 13:57:46
We have two players, which given recent weeks developments look like they are well down the pecking order.

Cleverley needs a move, does nothing well everything to standard. Rarely affects a game.

We should be moved no his wages on quickly.

McCarthy divides opinion on this site as much ch as Rom and Ross. There appears to be no middle ground. Has some use to my mind but his injury record for his age is not good enough.

Again suitors out there see the potential and think what if he stays injury free?

Celtic is a valid destination but they could never afford even a modest fee, so it would have to be for a player.

Not sure Everton has the negotiating skills to get Dembele or Tierney.