McCarthy and Mirallas 'not risked' due to fitness concerns 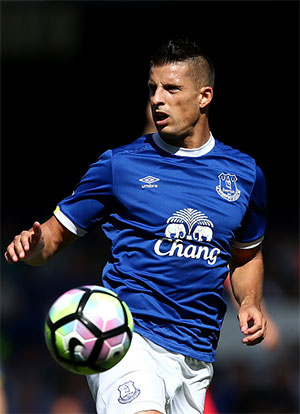 Both players were involved in last weekend's 6-3 win over Bournemouth but were missing from the team sheet for the match at Middlesbrough as the manager aimed to ensure they are fit for the next game in a fortnight's time.

“They weren't fit enough today,” Koeman told evertontv. “James was struggling after last weekend and, with his history this season, we didn't take any risks. He will be available in two weeks.

“It's the same for Kevin who was struggling with his groin. We want to make sure he is 100 per cent for the next game.”


Mick Davies
1 Posted 11/02/2017 at 20:00:58
I noticed the last kick of the first half v Bournemouth, McCarthy was about to clear the ball out of our area and another defender (Williams I think) kicked him accidentally. He was probably treated at half-time and given 10-15 mins to see how it went.

Pity really as we were a more balanced side in the first half, and he's been really unlucky with injuries over the last two seasons. The bonus is, there are so many good midfielders in the squad, he's not badly missed.

A regular in the Premier League a lot of years for a player his age. Especially a player whose calling card is covering every blade of grass.

From here on out, I can't see his hammy healing completely.

Dave Williams
9 Posted 12/02/2017 at 11:54:50
"Without doubt" James is NOT our best midfielder. He will run and press all day but Tom and Morgan have so much more to their game than James and when Ross is on his game he is the best midfielder at the club.

It's all opinions and it's so good that at last we have a few genuine candidates again.

Peter McHugh
10 Posted 12/02/2017 at 16:48:43
Pity we didn't have Niasse instead of Valencia to come on.
Steavey Buckley
11 Posted 12/02/2017 at 17:41:36
Dave: Morgan (another Barry but a lot more expensive) plays far too deep just in front of Williams and Funes Mori, so is bound to look good, would get a nose bleed if he went too far into the opposition's half. But if Koeman wants a pressing game, he will have to replace Morgan with a fit Besic.
Gavin Johnson
12 Posted 12/02/2017 at 17:52:00
Steavey, you sound like Schneiderlin being like Barry is a bad thing. A younger version of Gareth would be some signing.

Schneiderlin doesn't need to press forward all the time as a defensive midfielder. He just needs to protect the defence and be able to pick a forward pass, the same role Michael Carrick had at Man Utd for years.

Steavey (#11), Besic is already on his way to his next club.

Steavey Buckley
15 Posted 12/02/2017 at 20:50:12
Mike: I thought Gueye was not at his best on Saturday. I noticed too many Middlesborough players making too many inroads into the Everton half, which he would have stopped before he went away to the African Cup.

Some of his passing was well below par as well. With more expected from the Everton fans from the Everton team no player should take it for granted they can play week-in & week-out without proving it.

Please do tell, where is Mo Besic going? You have made that comment several times so you must be very sure of what you say.

Steve Woods
18 Posted 12/02/2017 at 21:02:47
Steavey @ 15, without wishing to appear pedantic, if you cast your mind back Gana was actually very poor in about three games before he went off to the AFCON thingy. Hopefully its just a temporary dip in form but IMO recently he's been nothing like the great player that he was for us up until about early December.
Steavey Buckley
19 Posted 12/02/2017 at 21:03:20
James: Besic is back in training and expect him to go with the rest of the 1st team to Dubai for the warmer winter break as Everton have no game until the 25th of February.
Steavey Buckley
20 Posted 12/02/2017 at 21:12:09
Steve: I thought Gueye and McCarthy were massive for Everton when playing Arsenal at home on the 13th of December and against Liverpool on the 21st, until McCarthy was injured at the end of the first half.

On Boxing Day, when Everton beat Leicester away 2-0, Gueye was in the team, and looked good again when beating Southampton 3-0 at home.

I do believe Everton will see the best of Gueye and McCarthy when they are playing together in midfield. Where that leaves Morgan, I don't know?

Sam Hoare
21 Posted 12/02/2017 at 22:13:21
I'm not sure I can agree McCarthy is our best midfielder. Not sure he's even in the top 3. He has been playing better since January but has a way to go to convince me he's better than Gueye, who before he went to AFCON had the most tackles and interceptions in Europe.

I think any combo of Davies, Gueye, McCarthy and Schneiderlin should give us plenty of energy and presence in the middle. Two of them have only just come in and they need time together and the right system around them and they will flourish.

Gavin Johnson
22 Posted 12/02/2017 at 22:43:10
I have to agree with Mike on Besic, Stevie. It's hard to see how he will get a game ahead of our other midfielders. If we get a decent offer I think he'll be sold in the summer. He might have talent but he'll never get a run in this side with his injury record. There's too many good players waiting in the wings. His Everton career has been stop-start to say the least.

Mike Gaynes
23 Posted 13/02/2017 at 01:47:27
Steavey (#15), Gueye was definitely not at his best on Saturday and was deservedly subbed off. He's still our best and will show it again very soon. Did you know that even after missing five games he is still the leading tackler in the Premier League?

Antonio (#17), I'm sure enough that I've made several bets with other TWers. To condense my previous comments, I'm confident Koeman doesn't fancy Besic because having seen a good deal of him â€“ managing against him and then watching him in training and preseason prior to the injury â€“ Koeman made offers to Gueye, Witsel, Sissoko and also pursued Schneiderlin and, as we recently learned, Thomas Delaney. All defensive mids. And all before Besic was hurt.

Reckless, liability and crab are all words I would use to describe him. He constantly over-hits passes which must be a nightmare to control and, the Man City semi-final apart, I struggle to remember him having any impact on a game.