Wednesday 12 April 2017  [Jump to last]
Seamus Coleman received a moral-boosting visit from his club manager and captain this week as he continues his rehabilitation from a broken leg.

The fullback suffered a double fracture of his right leg in the Republic of Ireland's World Cup qualifier against Wales last month and has been spending time with his family in his home town of Killybegs since undergoing surgery in Dublin.

Ronald Koeman and Phil Jagielka were joined by Everton's fitness coach, Jan Kluitenberg, and head of medical services, Matt Connery, as they made the trip across the water to visit Seamus in County Donegal. 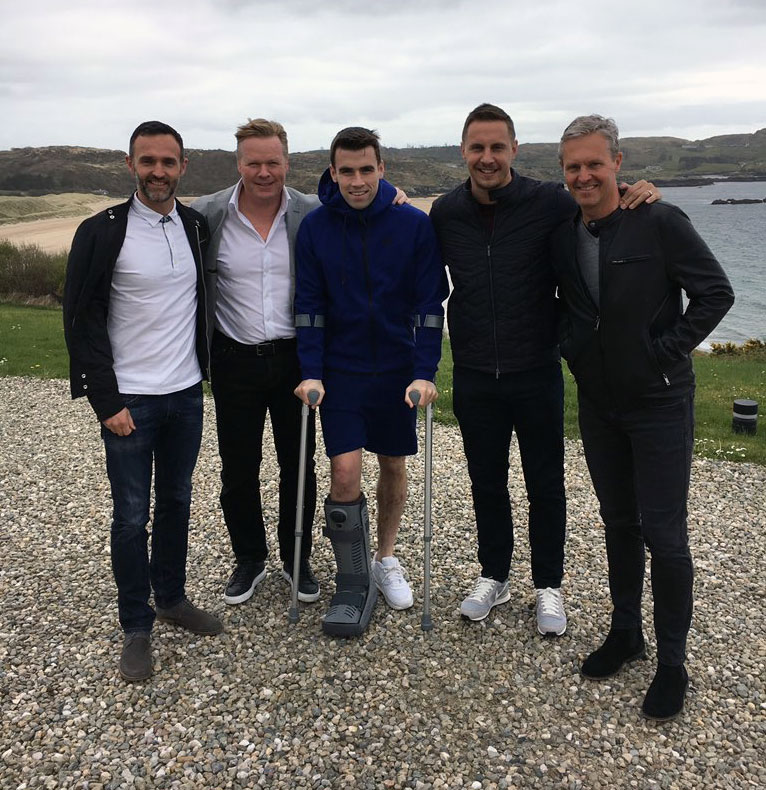 Ronald Koeman tweeted this photo of the group with Seamus Coleman

"Seamus is positive and he is feeling strong," Koeman told evertonfc.com.

"He is really grateful for the messages he has received from Everton fans and from people all over the world.

"Before he comes back to start his rehabilitation, he will spend up to 10 more days at home in Killybegs before starting out on his recovery from the injury."

Coleman's operation was deemed successful by his surgeon but no firm date for his return has been announced. He is not expected to be fully fit until the New Year.


Robert Leigh
1 Posted 13/04/2017 at 08:00:34
Sending out all the right signals to potential new players by visiting injured teammates. It was nice to hear Bolasie saying how supportive Seamus has been, and although a terrible shame, he was happy that he will be with him side-by-side as they recover from their respective injuries.

Trippier in for cover in the Summer?

How many other Clubs would extend the same appreciation for one it's injured players? Not many, if any at all!

He's this summer's Steklenenburg. Tried and trusted as far as Koeman is concerned. Free transfer as well. It's a no brainier for him.

I just hope this means we will keep playing Holgate or give Kenny a try and not just play Martina.

Give Kenny and Holgate a go instead of buying a journeyman stop gap.

I really hope he comes back without losing any of his pace or bottle, and is made club captain for as long as he's part of our squad.

Jags has been a fine captain. His conduct on and off the field, his work rate and determination are all exemplary.

From Ratcliffe to Watson to Weir to Jagielka, we've had a good run of captains, and Seamus would fit in that company, I'm sure.

I'll post an article shortly after I get home. You won't believe what TW hospitality made happen for me. Amazing.