Koeman not drawn on Keane speculation 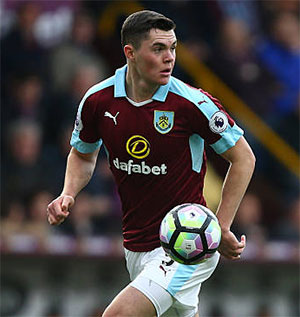 Ronald Koeman refused to discuss a potential move by Everton following the announcement that the defender will leave Burnley at the end of the season.

The highly-regarded centre-half has attracted an increasing amount of attention from the Premier League's bigger clubs with his performances this season and it was seen as inevitable that he would depart Turf Moor this summer.

Yesterday's confirmation that Burnley will sell him in the close season sparked predictable speculation in the media and Koeman, who has admitted his interest in signing Keane in recent weeks, was asked about him during his pre-match press conference at Finch Farm yesterday ahead of the trip to West Ham.

He wouldn't speak further about the 24-year-old, however, simply saying: "I don't speak about [my] interest in players."

He was asked to speak in general terms about his and Steve Walsh's recruitment goals for the summer and Koeman said that while it will be challenging competing for the top talent, he is confident that the Blues make for a tempting proposition these days.

"I think it's a really interesting process for players and I think we will have competition [from] bigger clubs and it's always difficult," the Dutchman said.

"But I think the way Everton is running and the direction the club is going makes it a really interesting project."


Jim Bennings
1 Posted 21/04/2017 at 07:49:25
If this, or any of one key transfer targets are to go through, then we need to get it done as soon as possible before other clubs express interests.
Mike Berry
2 Posted 21/04/2017 at 08:46:46
I think we will sign him as the so called top 4, bar Man City with Stones, have been reluctant to buy British centre backs, relying on foreign imports with high reputations.

Welcome, Michael you will have made the best decision of your life.

James Morgan
3 Posted 21/04/2017 at 08:47:11
I haven't seen much of this lad but I will trust Ronald's judgement and the general consensus he is a good player. I think Jagielka has got another year as part of the squad, not necessarily as a starter, so maybe just Keane would be enough to add to Jags, Williams, Holgate, Funes Mori, Pennington and any other young lads on the brink.

I approach this summer window with a little more excitement than ever before!

From what I have seen on the pitch, he seems handy enough... but we need real pace at the back to move to the next level in my view. Has he got it?

Peter Morris
7 Posted 21/04/2017 at 09:49:01
Our lack of height in the centre-back pairing is certainly a weakness that is targeted by opposing teams.

Burnley selected Vokes against us when he is not usually first choice, and Stoke selected Crouch from the start too. Our tallest centre back (Funes Mori) happens not to be very good at basic defending either.

I like the look of Keane. He looks like a ball playing defender, whereas the lad at Hull appears less strong in that regard but possibly a more robust defender.

I suspect that Van Dyke is beyond us – he will have his eye on a move to the capital. This position and a decent goalkeeper are big priorities for next season.

Alan J Thompson
8 Posted 21/04/2017 at 10:00:50
Quite right, Mr Koeman, only tell the world about which of our own players should leave. You wouldn't read oh, I just have!
Tony Hill
9 Posted 21/04/2017 at 11:09:27
I have some doubts about this player. He looks fairly standard to me and I didn't agree with the view in some quarters last weekend that his performance against us, his floundering for the Lukaku goal apart, was top notch.

I suspect we're going to go for him and Ronald, no doubt, has satisfied himself.

He brings the ball out of defence with real confidence, but doesn't fall into the Stones trap of thinking he's Messi. Reminds me of Richard Gough in that respect.

He's most likely already decided on a destination – sticking him on the market now might drive up a price, but the club that really wants him is probably already in pole position. Fingers crossed it's us!

Yet he refuses to discuss Michael Keane, cant see the difference myself. I would prefer if he didn't talk about transfers in or out of the club, until they have been completed.

Mark Morrissey
17 Posted 21/04/2017 at 17:24:21
It's seems such a shame that every player we go after seems to get touted around the press for weeks and weeks. Seems to make Steve Walsh's job an impossible task. How does he find talent without others knowing. Impossible.

As for Keane well he's fair enough but I would prefer Maguire from Hull or Sakho from Palace / RS.

Martinez did the same but Koeman is ridiculous. He spoke about Keane in January too and now he won't. He seems at odds with the usual manager talk of saying very little on transfers.

Badly turned for Lukaku, and the marking for Jags goal was iffy. If Jags missed, Lukaku was miles free.

Will Mabon
23 Posted 21/04/2017 at 22:46:35
Illustrated above by Tom and Ian, is the crux of many goals. Was it the striker doing his job or the defender not doing his? If Lukaku hadn't scored that goal against Burnley, would it have been due to Keane's defensive abilities or Lukaku's lack of prowess?

Quality vs quality, the outcome is never certain on any given day.

He could be a good fit but if the rich clubs want him and thy have a spot for him then there isn't much to be done.