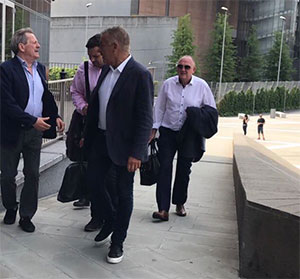 The club's director of football Steve Walsh was in Italy today meeting the heads of a number of clubs to discuss potential transfers.

A photograph of Walsh arriving for talks was shared on Twitter earlier today by Sky Sports Italy journalist Gianluca DiMarzio who suggested that the Blues' delegation was there to hold talks with AC Milan and Internazionale but it appears as though they will also meet with Fiorentina and Napoli while they are there.

Naturally, speculation has been rife as to which players he could be in Milan to discuss, with the names of striker Carols Bacca, Jeison Murillo, Gianluca Lapadula, Ever Banega and M'baye Niang bandied about.

In an interview with Radio CRC, Everton scout Carlo Jacomuzzi admitted that Bacca and defender Duvan Zapata were "interesting" options.

The future of Gerard Deulofeu, who spent the latter half of last season on loan at the San Siro, could also be on the agenda. If they are interested in in retaining him on a permanent basis, AC Milan have yet to lodge an offer to sign him.

Inter's Zapata, a Colombian international team-mate of Murillo who was linked with the Blues last week, has long been sought after by Premier League clubs while Bacca of AC, now 30 but still prolific in front of goal, could be looking for a move.

Jacomuzzi said that the club's interest in Dries Mertens has waned after he signed new terms in Naples and that Everton are no longer looking at Faouzi Ghoulam, also of Napoli.

"Bacca and Zapata have interesting profiles, but [a move] for one would exclude the other," he said. "These days we will talk with AC Milan, Fiorentina, Napoli and other teams. We'll see if anything happens.

"The 25million that [Napoli president] Aurelio De Laurentiis asks for Zapata is too high. However, everyone has the right to ask for what they want.

"This day we will have talks with several Italian teams, we talked with Milan, then we will also talk with Inter and Napoli.

Meanwhile, Italian transfer gossip site TuttoMercatoWeb suggest that Everton have approached Juventus about Gabon midfielder Mario Lemina who has been the subject of a proposed move to Valencia this summer.

The Mandarin Oriental means we might get a photo of dinner at Ristorante Seta with Bacca and Zapata.

If they're at the Greco (where I spent one night in 1978), Walsh will be coming home with Banega's boot boy and and a couple of takeaway pizzas.

Aidan Baker
12 Posted 14/06/2017 at 18:34:05
Both Milan clubs are under new Chinese owners who want to improve their lot very quickly. Milan just made it to the Europa League at the expense of Inter.

Milan have made no secret of their desire to keep Deulofeu, and given Barcelona's reluctance to buy him back, I think they just need Everton to agree a fee (15million Euros is mentioned over here in Italy).

The other players mentioned in this article don't strike me as the most consistent with the exception of Mertens who has just had the best season of his career and taken over from Higuain as the darling of Napoli fans.

From Milan - I would love it if we could get Manuel Locatelli only young but has the makings of becoming a brilliant player, Suso who plays between the lines of attack and midfield or the young defender Romagnoli who Montella noted in the very good Roma youth setup.

From Inter - I like Candreva who has bags of talent on the right, lots of assists and scores important goals, Joao Mario the ex-Porto midfielder who has a motor on him (though Everton already have lots of competition in that area) or Gagliardini who arrived from Atalanta last season and may soon become a key member of the Italian national side.

From Napoli - I like Koulibaly and Mertens. Can't really think of others worth going for at the moment but Walsh and his team may see things differently.

From Fiorentina - Federico Bernardeschi comes to mind, there is lots of speculation about him going to Juventus or Inter. Has scored some lovely goals from outside the area last season. Kalinic is a good striker who Milan are after, and one for the future is Federico Chiesa (the son of former Italy striker Enrico Chiesa).

What about it is bizarre exactly? When Lukaku leaves we will have exactly zero strikers in the senior team. I would sincerely hope we plan on signing more than a single striker this Summer. Kone gone, Valencia gone, Lukaku soon to be gone. By my count that leaves us needing a hell of a lot more than just Sandro.

Chris James
16 Posted 14/06/2017 at 19:19:22
Don't be ridiculous Tom, he wouldn't leave us on tenterhooks, fly all the way out there and attempt to tackle these clubs without intent - besides he doesn't even look like he's packed his rod!

Or were you just baiting us with your remark, attempting to catch us out?

We're off signing dross in Italy when we should be securing Pickford and Sandro. Now we're going to sign a load of randoms instead of focusing on quality. One of whom (Niang) we almost signed five years ago and last season he looked much worse than Calvert-Lewin.

We need to get quality in and continue to develop youth talent. We should be holland securing Klaassen, picking up the new Ajax prodigy de Ligt, and why not Kasper Dolberg. The one stop Ajax shop for three great young players, then back to England for sigurdsson. And then on the phone to Lukaku and saying, what do you think now Rom? One more year?

Steven Jones
23 Posted 14/06/2017 at 20:38:47
I think it is excellent both from a profile point of view but also an open options and build relationships point of view.

We know there will be twists and turns as some of our targets get picked off by a desperate West ham, Stoke or Crystal Palace willing to spunk the lot of their TV money or a champions League outfit offering better step up

We need Walsh out in the market where Italian clubs and relationships may deliver 1-3 quality players - either squad depth or replacing the strike force which has all but disappeared.
Mr Walsh has already put our stake in the Sandro table stakes and Pickford appears to be a Fitness test from conclusion .

But where is Bill? and Bob? Scout is interviewed, Walsh is photographed but there's nothing to see here. Brilliant.

I'm hoping that we haven't actually told the journos who are "actual" Italian targets really are. I'm hopeful that Steve Walsh and his entourage are laying a smelly trail to keep them off our real targets. We can but hope.

Let's see what he's got before the knives come out.

If these reports are true then both player and agent must be on-side.

Kieran Kinsella
32 Posted 14/06/2017 at 23:32:20
The story is bizarre in the sense that it sounds as if Walsh was given a wad of cash and sent on holiday to Italy with instructions to bring back some souvenirs. The targeting seems very vague with them bouncing around from club to club and player to player.
Peter Warren
33 Posted 14/06/2017 at 23:34:03
SJ, of course player and agent agree â€“ otherwise, we wouldn't agree fee with Sunderland. So, unless he does a Sissoko, then we've got him.

Gavin Johnson
34 Posted 14/06/2017 at 23:52:55
The logical deal would be a straight swap – Deulofeu for Niang. I'm not sure about Niang, he doesn't score many but my guess is that he's been deployed primarily as a winger.

He's still only 22 and I suspect that his game is better suited to the Premier League than Serie A football. He did okay for Watford. I gather they wanted to sign him so he mustn't have done too bad.

Carlos Bacca would be a decent signing, again in a deal for Deulofeu with us chucking a few million Milan's way.

Not sure about the other Milan striker (Lapadula) He's 27 and bounced around most of the clubs in Serie A without ever getting a cap for Italy. Definitely not the calibre of striker to replace Rom, IMO.

"We're off signing dross in Italy... a load of randoms instead of focusing on quality."

I'd suggest, without selling anyone, we'd have £80m maybe to spend. Just a figure plucked out the air... but if it is in that ballpark, we would spend that by signing Klaassen, Pickford, Keane and say one more top player in the £20m range. So it wouldn't surprise me if we target 1 or 2 on loan.

Darryl Ritchie
41 Posted 15/06/2017 at 07:16:27
Hopefully, Walsh is in Italy on a shopping trip to purchase a striker to compliment Sandro, and a quality centre-back to pair with Keane.

This above is, at present, wishful thinking, but it would be nice if it actually came true.

Pessimistic slant is: Walsh is just in Italy to finalize the sale of Deulofeu.

Either John (#19) is right and they got their Zapata's confused, or we have a really bad scout that can't tell the difference between a defender and a striker.

Or, perhaps more likely, the whole list of names is a smokescreen to throw the press off the real target – Koulibaly.

Extremely happy to sign Klaassen. Just wish we had news on Ramirez as he is the one we need. He is awesome.

He sounds just what we need.

Gomez on Tevez, what a challenge lol: https://youtu.be/x2uwDZ09v-I

I hope we got Klaassen sorted this weekend.

Graham Lloyd
55 Posted 15/06/2017 at 15:39:39
It seems open house now Steve Walsh is in Italy that we are buying everyone but my sneaking feeling is he is getting rid of Deulofeu and using him as a bargaining chip for a forward like Niang but I do hope Sandro comes.