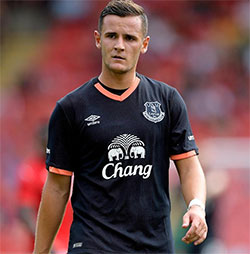 Shani Tarashaj's hopes of forcing his way into Ronald Koeman's thinking this summer have been dashed by an operation required on his knee.

The 22-year-old was signed by Roberto Martinez from Grasshopper Zurich 18 months ago but has yet to make a first-team appearance for the Blues despite making inroads into the Swiss national team.

Tarashaj spent last season on loan in Germany with Eintracht Frankfurt, making 15 Bundesliga appearances and scoring once and officially returned to Everton this summer.

He will be out of action for an unspecified period of time now after undergoing surgery in Rome last week.

Well, he's certainly been hidden, he re-appears, and is going to be out for God knows how long?

If I was 40 minutes younger, I'd have loved to have a 'job with Everton' we get these no-marks, God knows what wages they are on, and they disappear into obscurity.

I have worked all my life, got a crap pension, and I have to question, somewhere along the line, the Club, I love, seems to proliferate money, right left and centre?

Sorry for being a pain, but I am just stating facts, as I see them, as a life-long blue.

Rom is of a similar age. Just saying...