The Blues built up some irresistible momentum in the first half and took the lead with half an hour gone when Keane rose highest to head home Leighton Baines's cross.

Gueye doubled the advantage in first-half stoppage time with a confidently taken goal off Wayne Rooney's pass and thanks to Jordan Pickford and excellent displays at the back by Keane and Ashley Williams, Ronald Koeman's men held off intermittent pressure from Hajduk in the second half to avoid conceding an away goal going into the second leg.

Ademola Lookman made his first start in a side that also included Cuco Martina and Kevin Mirallas and the Blues made a good start without really threatening beyond a succession of crosses into the box until Davy Klaassen came within an inch of connecting with a low ball from the right.

The lively Lookman saw an early shot deflect behind while Vlasić screwed a tame effort wide at the other end before Morgan Schneiderlin picked up an early yellow card for a late tackle on Kožulj.

Klaassen and Baines sliced efforts well over the crossbar until another corner off a Martina cross led to Everton taking the lead.

The ball was kept alive by Baines after the initial set-piece was cleared and with the help of Klaassen he surged back into the box and clipped a teasing cross to the back post where Keane headed home with half an hour gone.

The game was held up shortly afterwards, however, when it all went off in the away end with seats and punches flying towards stewards. Play resumed four minutes later with the Hadjuk section heavily guarded by police.

Everton remained on the front foot and a great move carved the visiting defence open after Klaassen had seized on a slip not far outside the box. The Dutchman fed Rooney who played Gueye in superbly to tuck a smart finish inside the far post.

Vlasić had the Croatians' first shot on target in first-half stoppage time but Pickford was equal to the effort.

And after Hajduk had tested the Blues' keeper from distance again, Rooney had a great chance to make it 3-0. The forward was played in perfectly by Klaassen but his attempt to place a shot past the 'keeper was saved. 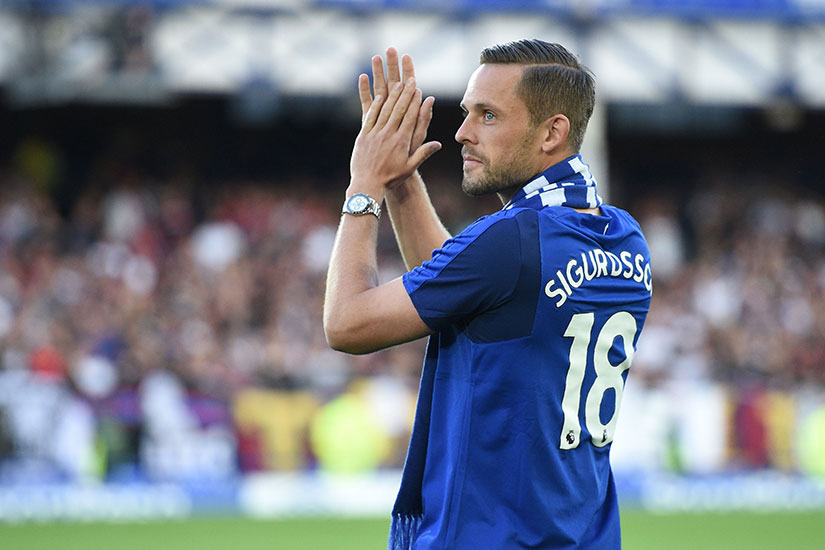 Gylfi Sigurdsson was paraded before his new fans before kick-off

Rooney had a decent chance early in the second half as well when Martina was released into space on the overlap and he crossed to the middle but the forward's header drifted wide of the far post.

Everton's tempo understandably lessened as the second half progressed and they tried to hit Rooney's runs off the last defender, the veteran unfortunately not finding the referee's assistant in charitable mood.

Hajduk, meanwhile, kept probing and when a foul on Gueye wasn't given, Ohandza found himself free to run at the home defence and force a save from Pickford who palmed his effort away to safety.

Klaassen's evening came to an end with just over an hour gone when Calvert-Lewin was introduced in his place but it was Hajduk who started to carry the greater threat, Hamza firing wide after dispossessing Gueye 25 yards from goal.

Everton lost their way a little in the final quarter of an hour and Pickford twice had to beat the ball away to deny substitute Erceg from the angle and then Momolla from distance.

Lookman had a late effort blocked as the Blues briefly threatened to score a third but the score remained at 2-0 until the final whistle.