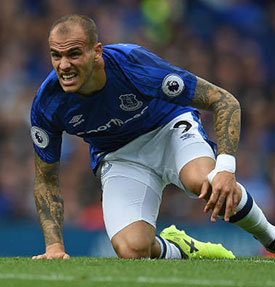 Sandro grimaces after suffering a heel injury against Stoke
Sandro Ramirez could be fit to make the trip to Split later this week but Ronald Koeman says it is still too soon to say for sure.

The Spaniard missed the first leg against Hajduk with a heel injury sustained against Stoke City in the Premier League opener 10 days ago but had been expected to play a part in yesterday's clash with Manchester City.

Sandro didn't make it, however, and his tweet of a photo of his foot in a protective brace while he settled down to watch the Blues' draw at the Etihad had many Blues fans fearing he would still be out for some time.

"I was disappointed he wasn't fit," Koeman said of the striker. "He had some problems yesterday.

"I hope [he will be fit] for Thursday. We have a really tough five days."

Everton take a 2-0 first-leg lead to face Hajduk on Thursday and then travel to Chelsea for their third away game in succession before entertaining Tottenham at Goodison Park after the international break.