Pressure mounts on Koeman as Burnley triumph at Goodison 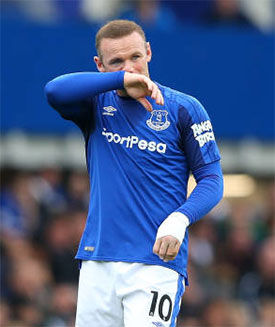 The Clarets, whose dreadful away form was a talking point of last season, added to their win at Chelsea and a pair of draws at Liverpool and Tottenham with their first victory at Goodison Park for 41 years thanks to a well-worked goal to which the Toffees could fashion no reply.

Instead of achieving a morale-boosting victory to reset the atmosphere around the club following Thursday's disappointing 2-2 draw with Apollon Limassol in the Europa League, Koeman's men struggled to break down a well-organised Burnley team that restricted their hosts to just a few openings after half-time.

Needing to respond from Thursday's set-back, Everton's starting XI featured more changes from the manager; Nikola Vlasic was rewarded for his sterling display against Limassol with a start and Oumar Niasse likewise recognised for his goalscoring heroics against Bournemouth last weekend.

Cuco Martina returned at right back and Michael Keane was passed fit to face his former club having recovered from a gashed foot. Wayne Rooney made way in attacking midfield for Dominic Calvert-Lewin to start in a two-man attack but, despite making a committed, energetic start, the Blues lacked the quality to make the breakthrough early on.

Nice control by Calvert-Lewin from Martina's cross ended with Niasse powering a shot straight at Pope in the Burnley goal and the Senegal striker almost got enough purchase on the ball as he toed it over the 'keeper but it was hooked away by a defender as Everton pushed in the opening quarter of an hour.

They should have taken the lead in that time but Gylfi Sigurdsson squandered two gilt-edged chances. First he wasted a great driving run from Calvert-Lewin by shooting tamely at the 'keeper and then he failed to get a shot away in front of goal after being played in by Niasse.

Having survived those early tests, Burnley took the lead with 20 minutes gone, carving Everton open with an impressive passing move that exploited the space down their left. Steven Ward was picked out on the overlap and when he found Hendrick in the middle with a simple pass, the Northern Ireland international kept his composure to stroke the ball past Jordan Pickford.

The home side's response was one of a team whose confidence had been sucked out of them. Not for the last time on the day, Idrissa Gueye skied a shot into the stands behind the goal and Niasse bobbled a shot past the post but the scoreline remained unchanged at the break.

With Burnley making it difficult for Everton to make inroads, Koeman was forced into his first change in the 63rd minute after Niasse had dropped a header wide from Leighton Baines's cross, Rooney coming on for Morgan Schneiderlin.

But it was the visitors who threatened next, Pickford prompted into parrying Robbie Brady's attempted cross to safety before Vlasic was withdrawn in favour of Tom Davies with 23 minutes left.

Everton pressed over the final quarter of the match but their approach play was generally poor and they resorted to too many ambitious efforts from distance. Rooney, Gueye and Sigurdsson were all wayward from outside the box and only Davies's shot looked destined to trouble Pope but it cannoned off a defender's head on its way towards the far corner.

One final move of promise three minutes from time set Calvert-Lewin up close to goal but his final effort lacked power and the keeper was again able to save.

Ashley Williams was deployed forward in injury time and he came very close to equalising when his header deflected off Matt Lowton but it fell behind off the defender's chest, leaving many among those fans who remained inside Goodison to boo the Everton players and their manager from the field.