Jagielka angling for return against Brighton 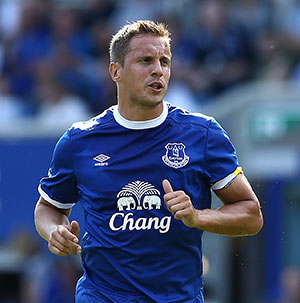 Phil Jagielka is hoping to retake his place in Everton's line-up this coming weekend when Everton face Brighton & Hove Albion in the Premier League.

The veteran defender has missed almost a month of action after picking up a hamstring problem and that has left Ronald Koeman short-handed at the back, particularly given that Michael Keane was also recently sidelined with a foot injury.

Jagielka is fit again now, though, and he wants to be at the heart of the Blues' attempts to turn their form around following an increasingly disappointing start to 2017-18. Everton have won just two of their first seven Premier League games, have yet to win in the group stages of the Europa League, and face a daunting task at Stamford Bridge towards the end of the month as they look to progress to the fifth round of the League Cup.

“The injury is all good now,” Jagielka says on evertonfc.com. “The Burnley game came a day or two too early, but with the international break, hopefully training will go well and I will be pushing for selection.”


Should he return to the starting XI, Jagielka would take the captain's armband off Leighton Baines who has also been at the club for a decade now.

“[It] is always the case [that the experienced players need to lead by example],”Jagielka continued. “Leighton has taken that onto the pitch in the past few games.

“He has been one of our best players and shown the way forward. That is all you can do. We all try to help motivate each other off the pitch but when the game starts it is all about doing the right things.

“It is a massive role for the captain, vice-captain and experienced players: to go out there and show that leadership through our performances.

“And, hopefully, once we get back from the international break we will put together a decent run and everyone will forget about the sticky start we have had.”

He was probably thinking he is an International level defender who can handle being fed the ball to move it up field. Maybe?

"Brilliant from Garbutt again, charging forward down the left and leaving Jack Chandler in his slipstream."

Maybe Garbutt will be worth another chance if Baines continues his rapid decline. Just a thought.

And yes, Garbutt is worth a shot back in the first team.

Williams is such a player - he makes huge mistakes when he tries to be ball player which he most definitely is not. Blame Williams if you like but surely Hennessy had no business to roll out that ball to him. Him of all people.

Maybe I am getting old but I remember real centre halves like Jack Charlton. Ireland did not try to be clever on the ball in their penalty area. Imagine what Roy Keane would do to Messrs Williams and Hennessey.

As a Wales supporter who remembers watching Kelsey etc play I am not surprised or disappointed – that sentiment is long gone!!

Unsworth for Manager – just get your boots ready, mate, you're playing centre-half for the foreseeable. Come home, please, Per Krøldrup – we need you.

Dave Abrahams
20 Posted 09/10/2017 at 23:49:22
Re Jags an his little talk, don't these players ever look at what they say? Just go out and earn your money, put a decent shift in, do your best with your feet and keep your mouths shut; most of are fed listening to the same nonsense after every poor performance.

Just go out and play for God's sake.

Paul Holmes
21 Posted 10/10/2017 at 00:26:29
Hywel Owen (post #19), great post at last from somebody who understands stopper Ashley Williams. Put Williams on a man-marking job and most times the attacker will not score (he marked Lukaku out the game in the Euros semi-final against Belgium).

Ask Williams to start playing out from the back and you are asking for trouble; he is not like John Stones's silky skills, but Stones could not handle Lukaku!

Keane or Funes Mori (when he's back) will have to be the ball players; Williams and Jags are stoppers, nothing more nothing less.

Saying that, in The 2nd half against Burnley he looked like he was trying more than most in the team. He put in a shift at least trying to make something happen.

If he puts his mind to it, I think he still has something to offer the team this season, and next in a supporting role.

Also being asked to provide width and continuously bomb up and down the line is beyond him at this stage of his career.

An absolute steal for what we paid for him. Pound for pound, one of the best signings we have ever made.

..and thankfully, never left for Man Utd on the two-way quality exchange train.

Tony Marsh
31 Posted 10/10/2017 at 20:14:40
When you consider the dross we have witnessed so far this season it's ironic that both Barkley and Funes Mori without playing now appear to be world beaters.!! Never have I known Injured players improve without actually playing.

Barkley and Funes Mori are head and shoulders above the crap out there at the minute that's how pathetic we are under Koeman. Barkley and Funes both ripped to shreds by Everton fans but I would welcome both back in a heart beat.

Will Mabon
32 Posted 11/10/2017 at 06:58:04
Tony, you have a point. I think the reality of ship 'em out and replace has dawned on many of its advocates. Hard enough to replace essentially a whole team in the best of circumstances I think.

When some of the replacements are not of the quality that went before, and are not given a chance to be at their best by the actions of the manager, the result is not a surprise.

If nothing else, I guess just about everyone is now disabused of the fantasy that Moshiri was gonna ride in on his charger, strip out the "Deadwood", and easily fund replacement with "Better" players, thereby setting us on a fast track for challenging the top four... all under the tutelage of a "Class" manager.

There'll be no buying the big time for EFC. Meanwhile, back to reality.

I also think we need a replacement for Baines lined up. He looks to me like anno domini has caught up with him.

Sorry. Anyway, so Baines has taken 'leading by example' onto the pitch the last few games? That it? Anyway, I think not. The only 'examples' exhibited thus far, by most, have been crap ones, and the sad irony is everyone else seems to have taken them to heart!!

Ashley Williams 'Hey, you've got to hide your head away...' body-language as he starts pulling his shirt up every time he slips up (again!) pretty much shows where we're at right now, including mentally, on the pitch!!!

They are going to support the team they love, and it's going to cost everyone of them a right few quid. Show this to your team-mates, and then show it to your manager, and then go out on the pitch, and put in the effort that will motivate these long suffering loyal supporters. Please?

Phil Walling
36 Posted 12/10/2017 at 15:57:43
I'm confident that Sunday will bring the respite we have all been praying for. We beat Bournemouth and we'll beat Brighton. It won't make Koeman a better manager but it will relieve the tension surrounding him.

I see a mini-revival to follow but reality will soon set in again. Top half will keep him in a job... for now.