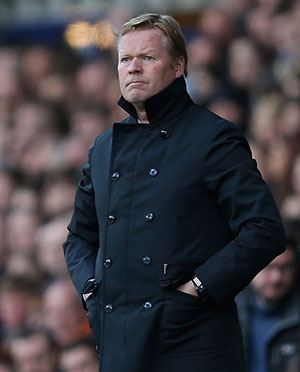 Koeman: "Maybe I am [already] in the crisis"

Everton play what is, arguably, their most important match of the season so far when French side Lyon come to Goodison Park in the Europa League.

The Blues have picked up just one point from their first two matches in Group E, having disgraced themselves in the opener at Atalanta and then thrown away two points against Apollon Limassol last time out.

The number of draws in the group games so far means that all four teams are close in the standings but Ronald Koeman is under pressure to start putting wins on the board on all three fronts on which Everton are engaged, particularly following another disappointing display in the Premier League at Brighton last Sunday.

Since beating Hajduk Split 2-0 in the home leg of the Europa League qualifier in mid-August, Koeman has overseen just two wins, the 2-1 triumph over Bournemouth and a 3-0 hammering of Sunderland in the League Cup, and that has intensified the scrutiny of his position at Everton.

The Dutchman was asked in his press conference today if he felt that, true to Craig Shakespeare's prescient recent assessment that Premier League managers are always four games away from a crisis, he felt that he, too, was in the same situation in the wake of the Leicester boss' sacking from the Midlands club.

“Maybe I am [already] in the crisis”, Koeman smiled. “But, okay, everybody knows that the manager's job is a really difficult job because things change really fast.

“We know that most of the time the manager doesn't really get the time to improve the team. But it's football, it's hard to take for the managers but it's part of the job.”

Koeman repeated his lament about not getting enough time between games to properly coach the players on his preferred methods and tactics and to prepare them for the next match but he will know that pressure will be on to get a victory against Lyon.

“It's [a] really important [game]. We know the situation in the group — that we need a win. We expected a win last time but unluckily the team from Cyprus scored in the last minute.

“But, you know, it's only one out of two [matches], you need a win. A win at home — normally you need 3 wins at home and maybe you pick something [up from] the away games, then It's OK.

“The situation is we need to win tomorrow to get the good possibilities to [progress] in the tournament.”

His prospects of doing that have been boosted by the news that Lyon will travel to Merseyside without five injured players. Pape Cheikh Diop, one-time reported Blues target Clement Grenier, and Jeremy Morel were already ruled out and now forward Mariano Diaz and left-back Ferland Mendy have been added to the list.

The French side will make the trip in good confidence, however, on the back of just one league defeat in Ligue 1 so far, that to title favourites Paris St Germain. As expected for a club of their recent achievements on the domestic and European fronts, they will still boast plenty of talent.

France international Nabil Fekir, who has a strike rate of a goal every three games in Ligue 1, will lead the line for l'OL who also boast the likes of Brazilian defender Rafael and ex-Chelsea and Ajax attacking midfielder Bertrand Traoré in their ranks.

Former Manchester United winger Memphis Depay, another player once seriously eyed by Everton, will return to Goodison for the first time since watching on from the sidelines as an unused substitute during a League game two years ago.

Koeman, meanwhile, will have the same squad from which to choose as he did last Sunday, with the exception of Oumar Niasse who is ineligible for the group phase of the Europa League.

James McCarthy is fit again but will be rested after playing 45 minutes for the Under-23s last night but could be in the frame for Sunday's clash with Arsenal. Jonjoe Kenny picked up a knock on Under-21s duty for England and is a doubt.

As ever, much attention will be devoted to how Koeman sets out his team as he struggles to find a winning combination, particularly in forward areas where a glut of attack-minded central midfielders is starving the team of width. He has no shortage of options — Kevin Mirallas made an almost heroic cameo as a late substitute on Sunday while Sandro Ramirez and Davy Klaassen weren't involved at all — but it seems as though the lack of a focal point up front and repetitively narrow and unbalanced line-ups is the greater concern.

Dominic Calvert-Lewin was, unsuccessfully, deployed out wide at Brighton while Wayne Rooney operated as an ineffective striker with Gylfi Sigurdsson behind him.

Nikola Vlasic, who has been a bright spot in an otherwise frustrating season thus far, will be pushing for another start but by his manager's own admission, he, too, is a player who looks at his best when played through the middle.

However Koeman elects to approach the match, there is no question that a win is vital for both morale and the team's prospects of getting out of the group. It wouldn't signal that Everton's problems have been resolved overnight but it would be a start and it would, at least, test the manager's theory that all his outfit needs is a victory to revive the Blues' fortunes. Lose and the pressure on his shoulders will only intensify.