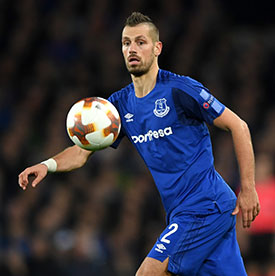 Morgan Schneiderlin could be fit following illness but would he be automatically selected?

Everton and David Unsworth travel to Leicester this Sunday looking to build on their performance against Chelsea in the cup and improve their standing in the Premier League.

The result in midweek may not have been a favourable one but there were signs to support the belief that the Blues are a far better team than they appeared to be in the final weeks of Ronald Koeman's reign — now they have to put a run together and prove it.

If Unsworth was on a hiding to nothing at Stamford Bridge, the King Power Stadium will be where the rubber meets the road for the caretaker manager. With a few more days under his belt to become more familiar with the entire squad and impress on them his methods, he will feel more ready for this his first Premier League game in charge.

As the build-up in the media will surely highlight, this is a meeting between two teams who made poor starts to the new season and whose impatient boards took decisive action in removing their manager as a result.

Koeman was dismissed after nine, Leicester sacked Craig Shakespeare just eight games into the campaign but the Foxes installed their new man this week, with ex-Southampton boss Claude Puel their somewhat surprising choice to take the team forward.

The Frenchman was accused of defensively-minded football at St Mary's which won't necessarily mesh with the attacking philosophy instilled under Claudio Ranieri that swept them to the title two seasons ago. Nevertheless, Everton should be wary of any “new broom” effect Leicester may exhibit of their own.

Puel is expected to make a winning start on Sunday, with the Foxes priced at 11/10 to defeat Everton. The visitors can be backed at 12/5, with the draw available at the same price, but play online casino games ahead of the match to give yourself the chance of boosting your bankroll.

“We'll do our homework as we normally do,” Unsworth said in his pre-match press conference. “We'll be very thorough and detailed in our preparation, regardless of whether there'a a new manager there or not.

“I want us to concentrate on ourselves and do what we do best. That's the most important thing at the moment.

Asked if he felt it was difficult parsing a starting XI from the pool of players he has at his disposal, some of them big names or with big transfer values who, like in midweek, might not get a look-in.

Indeed, the Blues' record signing, Gylfi Sigurdsson, didn't make the pitch at all against Chelsea in the League Cup defeat and neither did Michael Keane. Davy Klaassen and Sandro Ramirez weren't in the match-day squad at all but Unsworth will find in the coming games — depending on how long he remains in the job, of course — that he may need to draw on a number of players while he tries to find the best team and combination.

“No, it's not difficult at all,” he said. “They're nice problems to have. Like I say, we'll do our homework on Leicester and we'll pick a team to win the game with the individuals we have available.

“So, no, it's not difficult working with top talent. I just have to get my message across quickly of how I want to play and so far the players have been fantastic in taking on board that information.

“Today was an outstanding [training] session. Most of the players who played the other night just had a recovery session so the players who weren't involved trained and that was a really decent session.

“The more time we can get on the training ground, the more it will benefit us in the long run.”

Quite what the “right” team to take on Leicester in Unsworth's mind remains to be seen. Idrissa Gueye is eligible again after serving his one-match ban for the two yellow cards he picked up in the defeat to Arsenal while Morgan Schneiderlin is likely to have recovered from the illness that kept him out of the Carabao Cup game.

One of those could come in for Beni Baningime — it would be harsh on the youngster given his impressive debut on Wednesday, but experience might win out — while the other could also start given Unsworth's penchant for two holding midfielders at Under-23 level, although James McCarthy can fill the same brief and may keep his place.

In defence, Ashley Williams's place is, perhaps, the only one under threat following his lapse against Chelsea and Keane could be the beneficiary if Unsworth is so inclined. Meanwhile, in attack he may look to address how isolated Wayne Rooney was and perhaps pull him back into a more withdrawn role or play him off Dominic Calvert-Lewin, either at the expense of a winger or one of his central midfielders.

Leicester have won both their games since Shakespeare's dismissal, a 2-1 victory at Swansea City and a 3-1 League Cup triumph over Leeds, but with both sides in unfamiliar territory when it comes to the man in charge in the technical area, there is opportunity here for Everton to take the positives from Wednesday and carry them through to this game, particularly if Unsworth is able to execute on his game plan.

If they can remain tight at the back by keeping the likes of Jamie Vardy, Shinji Okazaki and Riyad Mahrez quiet, then they will have the platform on which to express themselves in an attacking capacity and, hopefully, find their scoring form up front.

*UK clocks go back an hour on Sunday morning