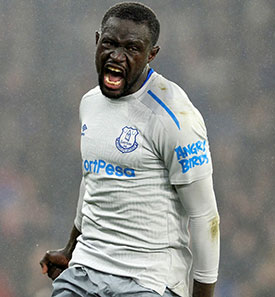 Updated Oumar Niasse has been handed a two-game ban for deceiving a referee following a Football Association review of Saturday's penalty decision at Crystal Palace.

The Everton striker went down under contact from defender Scott Dann and was awarded a spot kick by referee Anthony Taylor but he has been charged for simulation based on video replays of the incident.

The decision was made by a three-man panel of an ex-player, ex-manager and ex-referee and then upheld after the club appealed.

Niasse is the first player to be censured retroactively under the new FA guidelines and suspended for two matches, missing the games against Southampton and West Ham.

“It is alleged he committed an act of simulation which led to a penalty being awarded in the 5th minute of the game,” the FA statement read.

Everton said they were "disappointed" with the Football Association's decision to ban Niasse for diving. A club statement read:

"Although we are disappointed by the decision of the Independent Regulatory Commission to reject Oumar's denial of the charge, the Club and the player accept the outcome of today's hearing.

"We will make further comment when we have fully reviewed the observations contained in the report.

Speaking after the appeal was denied, caretaker manager David Unsworth insisted that he felt there was contact on his player and that referee Taylor made the correct decision at the time.

“I'm disappointed,” Unsworth admitted. “The referee is right there. I think there's contact; I think it's slight but there is contact and anywhere on the football field, that's a foul.

“The referee states, as he told Scott Dann, he had no intention of playing the ball and there is a slight bit of contact on Oumar. That's my view and it won't change.”

"I think these people [the FA] will be very busy. It's a dangerous precedent that could be set if decisions are given against you which are debatable."