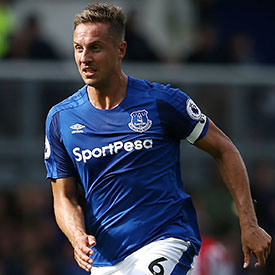 If there's a prevailing mood these days among Evertonians when it comes to the Anfield derby, it's surely one of resignation. The agonising over the ever-lengthening time since Everton's last win there, the hand-wringing over the crippling psychology that has built up over this fixture, and the desperation to beat Liverpool on their own patch for the first time in 18 years seems to have been replaced by a detached numbness that won't be dispelled until a Blues side finally does win this particular fixture.

What will be will be.

There was a realism about Everton's prospects against the Premier League's most in-form attack from new manager Sam Allardyce as well as he gears up for his first taste of the Merseyside derby.

He takes across Stanley Park a team that was, until very recently in a tailspin, seemingly headed for a relegation battle but which has now win three games on the bounce with three clean sheets and can now start looking upwards again rather than over their shoulders.

They will certainly be in a better frame of mind coming into this game than they would have been a fortnight ago but they will have their work cut out to earn a fourth successive shut-out against what is a depressingly dynamic and pacy forward line.

Allardyce's comments during his pre-match press conference certainly suggested that he is under no illusions about the strength of the opposition, a team that has scored 15 goals in its last three outings and has yet to lose on home soil in any competition this season.

The 63-year-old arrived at Everton with a reputation for successfully exploiting team's weaknesses — Jurgen Klopp's reds are notoriously suspect at the back, for example — and Evertonians will be hoping he can extend the good record he established playing at Anfield with his previous clubs but Allardyce admits the preparation will start by focusing on nullifying Liverpool's strengths first.

“It's a [Liverpool] that, I have to admit, is probably in the best form it's been in since Jurgen arrived and with one of the best strike forces available in the Premier League,” he said.

“That's certainly something we'll have to master before we can think about can we get in the right areas to try and get an opportunity to score a goal, not waste the possession that we get and not let the occasion over-awe us.

“That is the most important thing — to deliver a performance that is tactically right to block off the areas that Liverpool try and work in and then how good we're going to be when we're in possession.

“I think we all know that probably won't have as much possession as Liverpool on Sunday but we have make sure we do use [what possession we get] correctly and in the right manner.

“If and when we get a chance, we need to score. We need to be very clinical in our finishing when it comes along and that will hopefully get us a good performance and a result.

“The whole occasion is a test for the players that we have. The players need to rise to the occasion. It's a one-off and however Liverpool are playing at the moment, it is a derby match and anything can happen.

“All I can ask of the players is they play their best game. It still might not be good enough against this Liverpool [but you have to] go in with a positive frame of mind and really know what your strengths are, play to your capabilities and try to get a result.”

Allardyce indicated in the presser that the players who remained on Merseyside while the younger members of the squad salvaged some pride in Cyprus with a tremendous performance against Limassol will form the bulk of the starting XI on Sunday.

The manager also confirmed that in addition to Michael Keane, who returned from injury to make a cameo off the bench in last weekend's win over Huddersfield, Phil Jagielka could be fit again. Leighton Baines is still ruled out, however, placing a significant burden on whomever is selected in the left-back or left-wing-back role — most likely Cuco Martina.

“Some of those players who played last night will almost certainly be on the subs' bench,” Allardyce said when asked if some of the standout performers last night will have played their way into contention to face Liverpool.

That professionalism and commitment is the minimum of what will be demanded from Blues supporters on Sunday. Regardless of the result, they will be looking for further signs of progress while Allardcye is still in the process of assessing what he has inherited from Ronald Koeman as he looks ahead to the January transfer window and the return to action of the long-term injured.

Can the top flight's noted “spoiler” banish the mental block that Everton have had around facing the enemy from across the Park and spring a surprise? It might not be as big a deal as getting a statue made of him should he achieve it as was quipped during his press conference but it would certainly earn him a place in modern Toffees folklore.