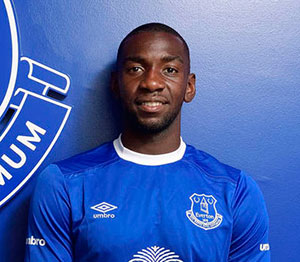 Yannick Bolasie saw his first semi-competitive action since recovering from a serious knee when he came on as a second-half substitute for Everton's Under-23s this evening.

The Congolese winger has been sidelined over a year following two surgeries but is now taking the final steps towards his long-awaited return to the first team.

Bolasie came replaced Dennis Adeniran with an hour gone of the Premier League 2 match against Leicester City but he couldn't prevent David Unsworth's side from going down to a 2-1 defeat at Holmes Park.

“Playing again was overwhelming,” Bolasie told evertonfc.com. “When I got on I felt good. I knew about two weeks ago I was going to play in this game so it's good.

“There wasn't any nerves! Now that I've played the 30 minutes there isn't any. Maybe before there was some because it's been a long time. Training is training — it's totally different in the matches when it matters so, yes, I'm happy.

“I want to be with the [first team] boys. Right now the team is doing really well so you're going to have to try to fight your way in but there's no rush for myself. I know what my role is because a year out in football means it will be a month or two before I'm really back at it but the main thing is that I feel okay.

“Just the smell of grass again in the game was great.”

Will make first goal for Sigurdsson at Anfield that is first step to dumping RS out of cup. Then, after 60 mins soaking up pressure, a long throw from goalie will send him galloping into their box where he is scythed down by Coutinho. He gets up uninjured and smiles to Big Sam.

This gets Coutinho a straight red, 15-game ban and Rooney sends whichever of their goalies the wrong way.

Klopp brings off all their team in a last 5 minute gamble and Klaassen scores from our own penalty spot with a cheeky but powerful back heel.

Gary Lineker asks Klopp for his reaction and he says it was never a penalty but he stands by his decision to bring the whole team off as it was to show solidarity with the fans that had by then left the Kop empty.

And welcome back, Yannick!

All of them, mate.

I wasn't overly impressed with this fella before his injury but I'm glad he's back after what must have been a very difficult time.

Steavey Buckley
20 Posted 12/12/2017 at 00:44:49
I hope Bolasie can return to full match fitness and help pay off the huge investment in him. I do believe buying good players in their late twenties for hefty amounts of money is a lazy way of developing a team.

Man City are buzzing at the moment but they are a team of players mostly not older than 26 when they were bought in the first place. Only Kyle Walker has been bought in his late 20s of late.

The fact is though that he's far from a notable goal-scorer (1 in 10 is his career average, unless we're the opponents of course), far from a notable "assister" and, unfortunately for us, far less likely after his serious injury to be anyone's idea of a box-to-box dynamo.

Was he Koeman's or Walsh's, or Kenwright's, idea of a good idea?

Answers on a postcard to us supporters though, as ever.

Furthermore, I think he was grossly overpriced at £28M, more like £12-13M would have been about right. Yet another buy attributable to Koeman.

Still hope he can have some impact over the run of games coming up.

Steve Hopkins
24 Posted 12/12/2017 at 07:20:24
Personally I don't think it's always about goals and assists although they do help. Lennon's contribution is a case in point, his re-introduction in the season as a whole and at Anfield on Sunday showed what a hard-working, pacey winger can do to relieve some pressure and prevent being overloaded by both the opposition's winger and fullback. Compare it to the lazy Mirallas or square pegs of Rooney or Calvert-Lewin.
Peter Larkin
25 Posted 12/12/2017 at 08:06:55
The very fact that, when Bolasie is on the field, teams will tend to sit that bit deeper and won't squeeze us as we have seen this season. Having pace gives us options. Would you rather Bolasie running at Lovern or Naisse?

All the haters, give the lad a break. I for one can't wait for his return. Also stats-wise, show me a out-and-out winger who produces every week in the Premier League?

Palace fans tell me that he was very frustrating for them. Brilliant very occasionally but largely ineffective or disinterested.

Regards coaching set-up, anyone noticed what looked like a dozen staff, not sub's, surrounding Pep at the end of the Manc derby.

Also, anyone not made-up by the activity on our bench during the game in the past few games? Shouts and pointing at players, earache for fourth official. About time.

Peter @ 26, speaking of our bench, did you see the footage from MotD2 when Rooney scored our penalty? If you did, what did you think of our Captain's reaction? Muted to say the least.

“Also stats wise, show me a out-and-out winger who produces every week in the Premier League?”

Errr... ummm... a guy who plays in a dirty red uniform and scored last Sunday against us?

Found myself watching our ladies after your link. I lost count of the goals but they scored a hat full there in the blizzard. I often wonder why they are referred to as Everton Women/England Women etc these days rather than 'Ladies'. Ladies sounds much better – anyone know why this is?

'Ladies' is the female counterpart to the male 'Lords' or sometimes 'Gentlemen'. The Everton men's team isn't referred to as the 'Everton Lords' team or gentlemen's team – seeing as we're not in Edwardian England anymore.

Actually, on this forum, the men's team has been referred to as many things this season.