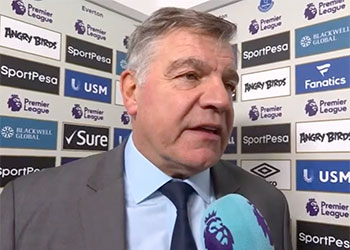 Sam Allardyce was happy to see Everton eventually prevail against struggling Swansea City after seeing his charges concede a soft goal to go 1-0 down in the first half.

The manager joked afterwards that he knew the identity of the player who had lost his man so disappointingly as Leroy Fer put the Welsh club ahead from a corner but he credited the home fans for their patience as the Blues turned the match around in the second half.

Having accepted the gift of a penalty in first-half stoppage time and equalised when Dominic Calvert-Lewin converted the rebound from Wayne Rooney's missed penalty, the Blues went on to win by two clear goals thanks to a stunner from Gylfi Sigurdsson and another penalty which Rooney successfully scored.

“With a pretty mediocre first half performance, I'm absolutely delighted with the turnaround and the lift of performance we gave in the second half because we really did need it.” the manager said.

“I was very pleased with the patience from the Everton fans in the first half where they still tried to give encouragement even though we weren't playing as well as we wanted.

“As we progressed in the second half and made a substitution, got Tom [Davies] on to get further forward with Wayne rather than Morgan sitting back that bit and then Gylfi comes out with a wonder goal.

“When you've got players like that they turn the game in your favour and with a better performance in the second half and that wonder goal, I think that finally that knocked Swansea down and we won it comfortably in the end 3-1.”

The win was Everton's fourth in five matches in all competitions since Allardyce took the reins from David Unsworth and, combined with the 4-0 win over West Ham on the day his appointment was confirmed, it has helped push the Blues into ninth place in the Premier League, just six points off Tottenham in seventh.

Asked what he has done at Goodison Park to not only stop the rot that had set in and was threatening Everton's top-flight status but to also put the team on this winning streak, Allardyce

“I just want everybody to get better — not just the players but every member of staff who works with the first team.

“To turn around so quickly is great credit to everybody, not just me for coming in now but everybody working so hard behind the scenes and to the players for going out on the pitch and turning what looked like quite a desperate situation into quite a comfortable one now.

“Some of us are looking up now and saying how far can we finish up the table rather than looking down and that's very, very pleasing for me because — believe you me — at the last couple of clubs it was a lot tougher to turn around in the early stages than this one has.