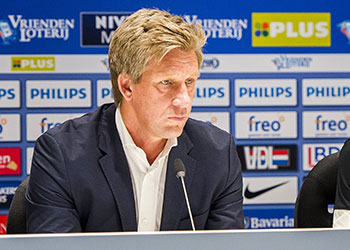 Some of the strongest indications thus far that Marcel Brands will shortly be joining Everton have cropped up in reports on both sides of the English channel over the past couple of days.

Speculation has been rife the past few weeks that PSV Eindhoven's renowned technical director was considering leaving the Dutch champions for a fresh challenge in the Premier League and it would appear as though an announcement confirming that decision is imminent.

Paul Joyce of The Times, usually a reliable reporter when it comes to Everton news, made reference to the fact that Brands's is expected to come on board at Everton over the close season in his report regarding the Wayne Rooney situation earlier today.

Meanwhile, in an interview with Voetbal International in the Netherlands, Brands makes another reference to how difficult it would be to leave his “family” at PSV but that he feels like he is leaving them in the lurch. VI's own suggestion was that, “[h]is statements are in the knowledge that a departure to Everton is forthcoming and done.”

“I am at the most beautiful club in the Netherlands and those who really know me know that I am very attached to people,” Brands said in quotes translated and published by the Sport Witness website. “That I should say to Toon [Gerbrands], my secretary, the people in the scouting, in the training or to Phillip [Cocu]: ‘I am leaving,' I think that's the hardest thing there is.

“I am tough, but at these moments I am very small. I have something special with so many people here. And they all give me a nice [send off], but I always feel like I'm abandoning those people.”

Having made the step up from a general manager role at RKC Waalwijk where he finished his career as a player, Brands took up technical director roles at AZ Alkmaar (where, coincidentally, he had to sack ex-Everton boss Ronald Koeman in 2009) and PSV.

Brands has earned a reputation as a savvy recruiter of players and under his sporting directorship, PSV have won the Dutch title in three of the last four seasons, dethroning perennial title winners over the previous four years Ajax.

It is believed that he would step into the director of football role currently occupied by Steve Walsh, with the latter perhaps moving into a chief scout position.