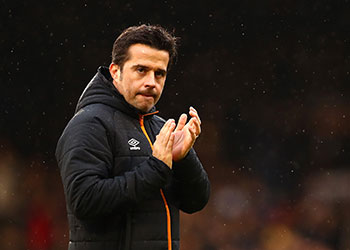 Everton are reportedly hoping to hold fresh talks with Watford's hierarchy to avoid a potential points deduction for what the Hertfordshire club deemed to have been an illegal approach for Marco Silva.

The Blues' major shareholder and de facto owner, Farhad Moshiri, had made the former Hull City boss his top managerial target following the sacking of Ronald Koeman last November but failed to get Watford to agree to let them hold talks.

Offers of compensation as high as £12m were said to have been offered by Everton but the Hornets held firm in the desire to keep the Portuguese. Results nosedived in the following weeks under Silva and, citing the Blues' interference as the catalyst, the club's owners sacked him in January.

According to reports, Silva remains Moshiri's main choice to succeed Sam Allardyce who is expected to be formally dismissed tomorrow but, while there is nothing stopping Everton's from seeing through their revived attempts to hire the 40-year-old from a legal perspective, it could inflame tensions with Watford and prompt them to press home their claims with an arbitration panel that their former boss was "tapped up".

In the unlikely event that they are penalised to the fullest extent, it could see Everton start next season in arrears with a points deduction, although a more likely outcome might be a cash settlement between the two clubs. A conciliatory offer from the Blues was apparently rejected following the first negotiations held last month.

The situation is complicated further by the fact that Silva is fighting Watford for unpaid compensation of his own to the tune of £750,000.