Brands plans squad cull to free up funds for Silva 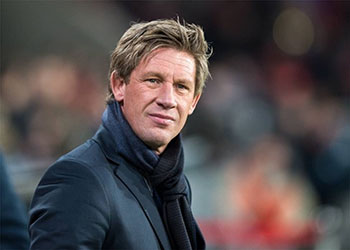 Marcel Brands has warned that Everton will need to trim its bloated squad of surplus players and wages before he and Marco Silva can make the targeted signings they believe will improve the team for next season.

The Blues' new Director of Football and manager are undergoing an analysis of the playing personnel they have inherited from Ronald Koeman, Sam Allardyce and Steve Walsh and Brands admits that some difficult but necessary conversations over their future with the club will have to take place with some players.

At issue is a senior squad boasting between 35 and 38 players, depending on how a few of the Under-23s who have been on the fringes of the first team are classified, and some hugely inflated transfer fees and wages that were paid and offered to last year's recruits in order to get them through the door.

Brands was asked whether there would be a repeat of last summer's open chequebook and he was frank in his assessment, while also admitting that it is going to be hard to offload some players because few clubs can match their current salaries.

“No,” he said in The Guardian. “First of all we need to offload players to raise money [for transfers], and also salary-wise. But it's not only a money thing. Of course money is important but also, for a coach, it is not workable to start with 38 players in your squad.

“We have to look for a squad Marco can work with and I think there always has to be space for young players to come to the first team.

“We have to be honest when we take the decision with these players. Do they have prospects here at Everton? Some of the conversations will not be nice but I think Marco must start with a squad that everyone is eager to play for and has prospects to play.”

Wayne Rooney could be first out the door as his slow-moving negotiations over a switch to DC United are seemingly nearing conclusion and, according to the latest reports, Morgan Schneiderlin and Davy Klaassen are two more players signed by Ronald Koeman on wages north of £100,000 a week who could follow him.

Schneiderlin is said to be keen on finding a new club, with speculation towards the end of the season just finished linking him with a return to France, and Sandro Ramirez, who arrived for just over £5m but is also on a big salary, has stressed he has no desire to play for Everton again after securing a loan move to Sevilla in January.

Klaassen, meanwhile, has publicly stated his desire to stay at Goodison Park to fight for his place but is reportedly being eyed by Besiktas, initially on loan, and, according to The Mirror Yannick Bolasie is the subject of interest from at least one Premier League club.

“[I]f you make a new signing,” Brands continued, “with the salaries in England and the player is not successful, then what do you do? In most countries players cannot make the wages they get in the Premier League, so a lot of players who don't play here cannot play anywhere, because the salaries are not comparable.

“Hopefully I will succeed in offloading the right players. They are good players, so I hope there will be interest for a few of our players.”