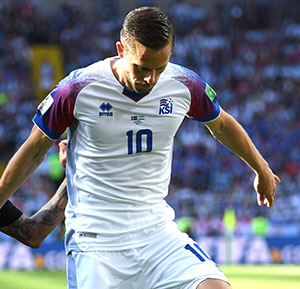 Gylfi Sigurdsson made his World Cup Finals bow with Iceland this afternoon and helped his nation hold highly-favoured Argentina to a 1-1 draw.

Sergio Aguero had seemingly set Argentina on their way when he finished superbly from a central position having taken a touch to create space for his shot.

Iceland were level within four minutes, however. Indecisiveness from Caballero almost let the Nordic side in and when the ball was worked wide to Sigurdsson, his low cross was palmed into the path of Alfred Finnbogason and he turned it into the empty net.

Sigurdsson had two chances late in the first half, first when he jinked past his man in the box but saw his placed side-foot shot saved by Caballero. Then, as Iceland kept the ball, he hammered a volley wide of goal.

All the talk before the match was how Lionel Messi would respond to his rival for world's greatest player, Cristiano Ronaldo's hat-trick for Portugal yesterday and the Argentine was handed the chance to reclaim the lead for his team midway through the second half from the penalty spot.

He was foiled by the goalkeeper, however, who guessed the right way and benefited from a shot placed at an inviting height to parry it away.

Argentina dominated the remainder of the half but they couldn't find a way past the resolute Icelanders.