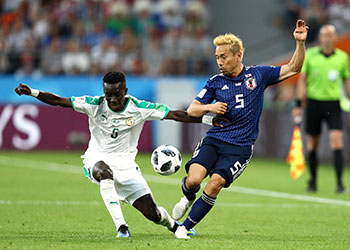 Idrissa Gueye played the full 90 minutes as Senegal drew 2-2 with Japan in Ekaterinburg.

The African side took the lead when Eiji Kawashima inexplicably elected to punch a low shot away and it struck Sadio Mane from close range before bouncing in.

Japan levelled, however, with a well-taken strike by Takashi Inui and they came close to going ahead when Yuya Osako's sumptuous effort hit the crossbar.

Senegal restored their advantage when Moussa Wague arrived at the back post and rattled a shot high into the goal but Keisuke Honda stepped off the bench to convert after Khadim N'Diaye had missed a cross into the box and was left stranded as the ball came back across to the veteran forward to sweep home.


Derek Knox
1 Posted 24/06/2018 at 22:31:59
Thought Gana played well, in what seemed to be a slightly more advanced role. This leaves their group still up for grabs, so no dead rubbers for the final group stage match.

Good to see Honda was firing on all cylinders, and still had something in his tank. Remember us being linked with him, last World Cup I think, albeit too late in his career. I'm surprised he is still going, obviously has a good engine.

Vin Genova
2 Posted 24/06/2018 at 22:45:00
Would you flip Gueye on for a nice profit if an offer comes? I think he is worth a shot as the pivot in the 4-3-3, but he doesn't offer enough going forward to play anywhere else. His game also might not suit a deeper role as the lone defensive mid.

Gueye is probably one of the few recent buys that can be resold for higher than Everton paid (especially if Senegal goes on a run), Silva should put that towards a true pivot if he thinks Gueye can't play there.

The pivot is the player who links defence and attack. The player who distributes the ball and initiates attacks. The most critical attribute of the pivot is passing. The position of the pivot is the deepest of the midfielders. The holding player. The 4-2-3-1 formation came about because of the inability of players like Gueye to pass, and the inability of others to tackle and win the ball. This led to the "double pivot" formation and the theory that two players could make one great player. Guardiola re-established the 4-3-3 formation by developing Sergio Busquets as a single pivot. A player who is great at tackling and intercepting, but still proficient at passing, both in terms of accuracy and range. Someone who could move the ball quickly and if the desired ball to Xavi wasn't on, he could play the longer pass and shift the ball himself.

Gueye is a good player. He covers a lot of ground. He reads the play exceptionally well. He makes an astounding number of interceptions, often in the top few in the league in terms of statistics. Likewise, he is exceptional at tackling and also posts superb statistics for this. But let's make no mistake, he cannot pass. His passing is abysmal. If Silva is going to play his Sporting 4-3-3, and Gueye is to play deep, then he's playing the Carvalho role. This means his raison d'etre is his ability to shift the ball quickly and accurately to the flanks, not a 5-yard pass, but a 30-, 40-, 50-yard pass, accurately, and quickly, and often through or over a crowd of players. Sorry, but Gueye cannot do that.

What Gueye could do, is play along side a player like Ever Banega, who is about to sign for Arsenal and link up with his old mentor (who rebooted his career after it had stalled badly), and be the one who wins the ball and gets it to Banega, who is then the one who does the passing. So, be part of a double pivot.

Silva did allude to playing a double pivot, as he did at Estoril, Olympiacos, Hull and Watford, more often than not. 4-2-3-1 is bay far the formation he has played the most. Which is why I found it bizarre that he said what he did about Schneiderlin. Was it a thinly veiled "I don't need you as much as you think I do" retort to Carvalho who is available on a "free". Forgetting that, what Silva was telling us was that he can see a system where Schneiderlin effectively plays in a similar role to Busquets (of course not to anywhere near a similar standard – before I get a post saying I said Silva thinks Schneiderlin is as good as Busquets). This role being someone who can win the ball but also distribute the ball on his own. Schneiderlin is way down on interceptions and tackling compared to Gueye and is far from being like Michael Carrick in terms of passing, but he CAN BE proficient at these things (and yes he was not last season, not even close). He can win the ball or be close to the ball when it's won, and hit a pass quickly to the flanks and get a move going, in that explosive counter attacking "Spring" system Silva loves.

But here's where I see it fall down. Say the midfield three is Schneiderlin, Gueye and Sigurdsson. And Sigurdsson and Gueye are box to box. I would naturally expect Gueye to drop deeper than Sigurdsson and help win the ball, and Sigurdsson naturally get forwards more, as he is most dangerous in and around the edge of the box. So suddenly that 4-3-3 is playing more like a 4-2-3-1 anyway.

If we are to play Silva's 4-3-3, then we need someone in that Busquets mould who can sit in front of the defence and hold, tackle, intercept, read the game defensively, win the ball, and then immediately launch a rapid counter attack by pinging the ball 30 yards into space for Walcott to scamper after, and suddenly the opposition exposed and space for the likes of Calvert-Lewin and Lookman to race into.

I can't see how Gueye can really add enough in a box-to-box role for us to be of the level we need to be top 6. I don't think Schneiderlin can play the single pivot role well enough for a top 6 side either. So yes, I'd happily sell Gueye, and Schniederlin, if the money is right, and bring in a decent passer of the ball who can tackle, intercept, and read the play defensively. Sure, I would have Carvalho, and whilst most of you would not, I would say you'd be surprised at how much better he is when his side plays with a much higher tempo than Portugal are doing in this World Cup, and when he is under instruction to hit the flanks immediately after the ball is won in the middle, then you'd see just how good a passer of the ball he is. Sure, if someone thinks they have a player who could come to us, could do this job better than both Schniderlin and Carvalho, then let's hear it. Of course, we're asking for a young Gareth Barry, or a Michael Carrick, but both of them needed a Gueye type as they struggled to win the ball back on their own, and both thrived in a double pivot.

One last thing though, and I've said it before, Davies and McCarthy (if the latter recovers fully) will thrive under Silva in the box-to-box role, and will play the best football of their careers.

Derek Knox
4 Posted 25/06/2018 at 01:25:04
Steve, couldn't help but notice you said Gana's passing is abysmal, yet if you look at the stats for last night's game, Gana had the highest percentage of passing accuracy.

While I totally agree that abysmal passing was all too common last season in every department, maybe it was the training regime, or lack of it, and poor management?

A bit unfair to make Gana the main culprit, when stats dictate otherwise. I have always liked Gana and feel he can still play a big part for us with the right management and equally the right players round him.

But he hits safe passes,
He hits short passes,
He under-hits passes, so players have to wait for the ball,
He doesn't take risks,
He cannot see a killer ball,

I do like Gueye. He is a decent player, and what he does well, he does exceptionally well. There is a role for him, but it's not as a single pivot, or as a box-to-box midfielder, it's as a ball winner, deep alongside another defensive midfielder who operates as a deep-lying playmaker.

Steve Ferns
6 Posted 25/06/2018 at 01:46:32
On reflection, you're right though Derek, his passing is not abysmal, that is an exaggeration by myself. But it is limited, and it is not even close to being competent for the role of a single pivot, in the style that Silva would require to launch the rapid spring like counter-attacks.
Peter Gorman
7 Posted 25/06/2018 at 02:26:04
I've always seen Gana's role as being to win the ball and 're-cycle' possession by giving it to somebody who knows what they are doing. Like Steve, I don't think this quite qualifies him as a pivot.

In his first season, it was frightening how good he was at this. He was the prince of tackles and, a poor derby aside, saved our bacon on countless occasions each match with his superb timing. I think he ended the season as the best tackler in the Premier League.

A second season which saw pretty much every player on the books sink into the toilet seems to be clouding some of our better judgement.

Of course, his frailties in the attack were exposed last season. Look at the difference in who he was partnered with. His first season partnered with a top-notch, first-rate pro; his second with Morgan Schneiderlin.

For the midfield to click best, Gana needs someone next to or in front of him who can take the ball and move it forward into the attack. Grandpa Gareth could; prime-of-his-career Morgan can't (or won't).

Gana is not a problem for Everton. He is excellent at his job.

Vin Genova
9 Posted 25/06/2018 at 07:53:09
Steve, it is mostly wishful thinking on my part! I'm not suggesting Brands can hang up the phones because Gana is the next Pirlo. But Gana is already on the roster, we know what he can do defensively and he is a likable player who always plays hard.

He might be able to get Sigurdsson and Davies into space every now and then. For July, no harm in putting him there to see what happens while Brands finds the long-term solution. Or like you said, Gana plays next to someone in a 4-2-3-1.

Honestly, I want the pivot to be someone else who is already here — Baines! I thought Bobby's best (only?) idea was to move the aging Leighton from left-back to midfield, a shame we never got to see that come to light. Maybe they tried it in practice and it wasn't working, or maybe Leighton was still a very good left-back and the move didn't need to happen yet.

As an American, I'll be first in line to see Baines's MLS opener, but I want to see him in Blue – as a midfielder – for a few more years first.