Blues win a desperate fractious scrap in the end 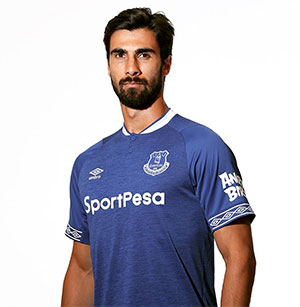 Lookman was the spark as a last-minute goal from sub Calvert-Lewin made the scoreline much more respectable than they deserved after this feisty fractious encounter that saw five yellow cards for the Blues.

The big news for Everton is that Ademola Lookman finally gets a starting place, with Theo Walcott dropped to the bench.

The visitors got things going and held the ball well enough to pose an early threat that was snuffed out by Bernard. Lookman was fouled but an early opportunity for Sigurdsson to swing something in was wasted as it bobbled through to Begovic.

An attack down the right for Bournemouth left you wondering how on earth Josh King failed to score after fed by Fraser in the 6-yard box. They won a free-kick on their next attack, Brooks getting clipped by Gana and wanting a penalty.

Another attack saw Lerma drive wide before Everton had a decent response with Lookman's shot blocked and Bournemouth broke at pace, Brooks getting in behind Keane and smacking the face of the post when he really should have scored.

A corner for Everton could not be converted by Zouma and immediately Bournemouth were on the counter, this time kept away from a shot on the fragile-looking Everton goal.

With Everton responding a little better to the Cherries' energy, Digne got a chance to cross with Richarlison waiting at the far post but the ball was defended away. At the other end, Brooks and Fraser were continuing to give the Everton defence something to think about.

Richarlison went down under Ake but no free-kick, much to he crowd's displeasure, as the lively pace of the game made it compelling but at the same time worrying how poorly Everton were controlling things, Pickford and Zouma almost getting in a pickle.

Gueye was called for some clumsy play on Smith, in a dangerous spot just outside the Everton area, Stanislas' free-kick placed cleverly round the wall forcing a diving nervey save from Pickford, the ensuing corner getting worked around to Gosling whose shot was well wide.

Richarlison could not get a whiff of the ball and Bournemouth were on them more like terriers than Cherries, looking to embarrass the erratic Pickford at every opportunity.

Everton broke down the right and a good cross from Lookman was headed wide by Bernard, with Richarlison waiting again. Everton could not break out, Bernard giving the ball away and Bournemouth getting another dangerous free-kick that spun away for a corner off Keane's head.

Everton mounted their best attack, the ball dropping for Lookman but he could not pull the trigger. The visitors ran Everton ragged again as the rain came down.

Everton were finally attacking with a bit more pace and intent, winning a corner, but it was repelled. But Digne fed Lookman again and another brilliant cross was admired by the Everton forwards from a distance, no-one in there to convert it. Digne was next to get forward as Everton finally looked better but overhit his cross very poorly.

A much much better Everton move, with Lookman the spark, won a corner, with Keane eventually glancing the ball onto the top of the angle. Everton continued to attack with much more desire and invention, winning a free-kick, Richarlison dropping rather too easily. Digne put it into the wall twice. Very poor execution from a strong position. The ball was worked around again and Sigurdsson pulled his shot wide when it should really be on target at least.

Incredibly, the first-half finished goalless, Bournemouth deserving something more than Everton who were frustratingly lethargic for the first half-hour.

Everton started the second half with far more determination, Sigurdsson swinging in a great cross that Bernard was too short for. Off a corner, Richarlison had three bites of the cherry, so to speak, the last one cleared incredibly off the line.

Then it was Bournemouth's turn to attack, a header skimming off the top of the Pickford's net. But Everton repelled that and were attacking again, Sigurdsson wasting a free kick with a lame chip that was easily countered.

A Sigurdsson corner went all the way over and Digne picked it up, running forward and crossing in to Zouma who planted a fine header past Begovic, a goal at last!

After some more good Everton pressure, Bournemouth broke at pace, Keane fouling Fraser but King surging forward and lashing a shot into the side netting.

Some silliness form Gomes, grabbing the ball again after a foul called, saw him and then Zouma carded. Utterly stupid. Everton had to defend and saw the ball shepherded behind harmlessly.

Everton were getting the ball forward with greater pace, but Bournemouth were still making a real game of it, looking for that equalizer. Richarlison and Sigurdsson showed some bite in chasing down the ball, then a strong barge from Gomes, could perhaps have been his second yellow card. He then stood on King's foot, never seen Gomes so agitated.

The free-kick saw havoc in the Everton area, Everton grateful to give away a corner as Bournemouth attacked, but Pickford took control and launched the ball upfield, Sigurdsson swinging in a cross for a diving header wide by Richarlison. Walcott replaced Bernard.

The frenetic pace of the game continued with the quality of play at best scrappy. Richarlison got a chance to run at Cook but drove his shot high and wide. He later went in the referee's book for a forearm in the face of Cook.

Calvert-Lewin replaced Richarlison, the rain torrential, this game with the feel of a good old-fashioned tussle lacking only the obligatory mudbath. Pickford had to be out smartly to deny Fraser. But a free-kick for the visitors was tipped away, and it came to Lookman on the break but he could not dig out the pass.

Bournemouth drove into the area and Gosling was denied expertly by Keane, at the expense of a corner, Mina replacing Sigurdsson before it was taken as the 5 added minutes lasted an age for the now desperate Blues.

Another Bournemouth corner needed a save by Pickford, who launched it upfield, Lookman fighting for it with determination then feeding Calvert-Lewin for a fine side-footed shot that nicked off Ake and slotted inside Begovic's goal to seal the points after a frantic fractious physical, helter-skelter encounter the scoreline really harsh on a very feisty Bournemouth side.