Gueye fires Senegal into the semi-finals 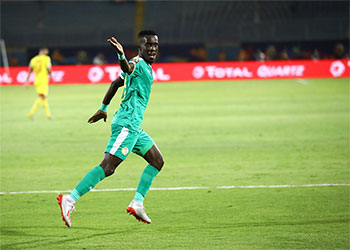 Idrissa Gueye scored the only goal as Senegal progressed to the last four of the Africa Cup of Nations this evening.

The Everton midfielder struck with 20 minutes to go to beat Benin and book the Teranga Lions' place in the semi-finals.

It was Gueye's second goal of the tournament.

A defensive midfielder who puts in 100% all the time, runs, tackles, tracks back, closes down and can score.

He's superb and at 29 is at his peak, not past it like some suggest. He's got another 3 or 4 years at his peak yet.

Tony Abrahams
2 Posted 10/07/2019 at 20:27:55
Took his goal really well, and was then pulled down when about to go clean through, which resulted in a sending off for his opponent.

Hope he stays, but it looks as though things might start hotting-up in the next couple of weeks, and I wouldn't be surprised to see him sign for PSG.

He is the peak of his powers, since January I'd say he's been one of the best midfielders in the business. Beyond his tirelessness, his tackling, closing down he's added more dynamism, more breaking forward with the ball, more attacking threat, more forward passing. He's a complete midfielder.

And I'm shocked that some people feel we'd be better off selling him for 25-30 million because he's 29. With his fitness levels, I'd say he has at least 4 years at the top level. And to replace him would cost at least 50 million, with no guarantees (look at Fred at Man Utd).

For me, we should offer him a 4 year contract and the captains armband. If he does push for a move, demand 50+ million.

David Pearl
5 Posted 10/07/2019 at 21:02:06
He really is that good. It wont happen but I'd really like to see Gomes and Siggy play around him. As in drop Siggy a little deeper or even bring Bernard in the middle. We push our wide players too wide. I'd like to see tweaking so that our full backs play wide and further upfield so we are more compact. Of course we need another goal scorer but we have the players, of they believe in themselves. Anyway... I wonder when the new football manager is out.
Phil Bellis
6 Posted 10/07/2019 at 21:17:17
Great player and we really need to keep him but decision out of our hands I think
He must be a nightmare to play against... a wasp crossed with an ankle biting terrier

With Senegal going so deep in the tournament now, does that make it possible he could miss the first game or two of the season?

My preference would be keep him, get rid of deadwood, Besic, Bolaise, McCarthy and Schneirderlin.

Sam Hoare
21 Posted 11/07/2019 at 07:23:52
I'm glad he's now getting the recognition he deserved. Been my favourite Everton player for a while now even if his passing is frustrating at times. World class at tackling and interceptions.

Transfer wise I'd like him to stay but I could not begrudge him the wish to move. He's been such a pro and only has a few more years at his absolute peak. If he's going to move to a CL club it needs to be soon. Unless we gatecrash top 4!

Silva quite rightly loves him and will be loathe to let him go. But if a £35-40m bid comes in then business wise I imagine that may be hard for the club to turn down on a player who'll be worth a quarter that in 2-3 years time. I hear Tuchel at PSG is still keen despite the Herrera signing. Time will tell.

If he does go then he'll be nigh on impossible to replace but there are some good young defensive midfielders out there who could give it a shot.

We can not replace that energy no matter what money we take in because who will we be able to attract here?

Also looks like Lookmans days here are numbered with Leipzig making a bid for him.

We shouldn't settle for a cent less, but if he really wants to go, you have to let him.

David Pearl
29 Posted 11/07/2019 at 19:27:03
We don't really have to let him though do we Mike, although we will if the price is right. Brands has been looking at alternatives all summer if you believe the papers. I really didn't want too many changes to our starting line up this season, better to start with a settled line up.
Jim Bennings
30 Posted 11/07/2019 at 19:31:03
I think if this is a real serious bid from PSG then Gana will go this time, no doubt about it he applied himself so well from January onwards but we probably knew this was coming.

It's a monumental loss and I don't know where a natural experienced replacement comes from, to play that role that Gana does so well you need experience and the know how of putting fires out, he's been perfect at that since Gareth Barry's departure.

So disappointing if this deal happens.

If we are serious about our challenging the top 4, we must keep our best player.

Like Palace with Zaha, Leicester with Maguire... play hardball.

The only time we have ever played hardball with any player was the stance on John Stones thanks to Martinez's refusal to bow to Chelsea in summer 2015, inevitably the following summer he left but at least it was a year after he begged to go and it wasn't to Chelsea.

We bent over as soon as Man Utd came calling for Lukaku, regardless of his failings there, he scored 25 goals that season for us.

We bent over and got done by Man Utd for Rooney before his best years. It's what we do at Everton.

But if a player wants to move on to realize his dreams, you can't keep him forever, and if ever a player has earned the right to ask for that consideration, it's Gana.

I'm all for hardball and getting the maximum return, and we've already showed PSG we're willing to do that, so the current bid should be dismissed out of hand. But at some point we'll just have to shake his hand and wish him the best.

And at that point I'll be sitting in the corner sucking my thumb, because as Eugene says, this is as close to an irreplaceable player as we've had in a long time.

Joe O'Brien
35 Posted 11/07/2019 at 20:45:05
Yep, Mike, I'm with you at that one mate. Gutted if he goes... he'll leave a massive hole in our midfield... but the way he played since that move didn't happen in January spoke wonders about the man. No such thing as 'downing tools', where an awful lot of the current professionals would do.

We can legally keep him but, out of respect for him, I'd say get top dollar and wish him all the best.

And if not then maybe a slight change in shape and tactics. If he does go then Brands has even more to do over the next (sips Whiskey)... (and again), 3/4 weeks.

Brian Williams
37 Posted 11/07/2019 at 21:05:03
The club, if Gana still wants to go, should explain to him that they're willing to let him go only if their valuation is met. They should then inform PSG, if indeed they HAVE renewed their interest, that this is the price and it's non negotiable.

Ironically PSG are back on the sniff, and perhaps this could be genuinely a serious test.

Let's pray he stays as we will lose the heart beat of the team if he goes and our combative edge in midfield.

This preseason we need some positive news soon as it looks likely this time we will be doing late business.

It's sombering times and surely Marcel Brands will play his ace cards soon, and we get players in, with minimum time to gel and bond into the squad.

We must start the season stronger in terms of squad than we finished. Will it happen?

Fran Mitchell
39 Posted 11/07/2019 at 21:23:53
Davies certainly has ability, but in Gueye's position, I feel players benefits from experience, this is why Gueye only seems to get better. So to ask a 20/21 year old to fill the role is unfair, and Davies is still finding his role. This should be a big year for him.

I honestly don't know what we'd do without Gueye.

I'd say, apart from Spurs, Everton's is as good any there. But take away Gomes, and we're arguably the weakest.