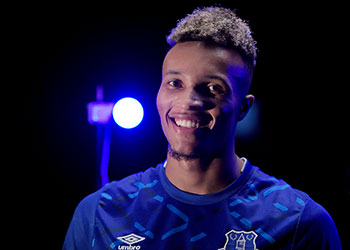 Jean-Philippe Gbamin has spoken of how well he is settling into his new surroundings following his £23m transfer from FSV Mainz 05 that was completed on Friday.

Along with striker Moise Kean, the 23-year-old sat down for his first official press conference as a Blues player at Finch Farm earlier today and he was asked what attracted him to leave the Bundesliga for Everton.

“First and foremost, they really wanted me, and they wanted me to play in a position I really love in playing in as well. They followed me for a really long time and showed real, genuine interest.

“Everton are a big club and when a big club comes in for you, you don't hesitate for one second.

“I'd like to see what we can do this season,” the 23-year-old said when asked about the Toffees' prospects of qualifying for Europe in his first campaign at the club. “I think we might be able to grab one of the European places and maybe pick up a trophy along the way with a win in one of the cups.

“Obviously, it's the objective of any professional player, when you start a season you don't start negatively, you want to go right to the end of the season involved in as many competitions as you can be.”

While he feels as though he has been settling in well, Gbamin doesn't anticipate featuring in the season opener against Crystal Palace this weekend which comes a little over a week after his arrival.

He explained that he is just focusing on getting himself right so that he can be ready when called upon.

“I feel really good. I've had a great welcome from everyone which is very nice. Everyone has been helpful both to myself and Moise who joined at the same time.

“First and foremost, I've come here to play in midfield as a ‘six', a defensive midfielder, if you like,” Gbamin explained in terms of his own role in Marco Silva's side. “But if there are situations where the manager asked me to do so, I'm more than happy to play in a number of different positions. Obviously, central defence is one of those, and I'd be happy to help out.

“I think that maybe this week might be a little bit soon,” the Ivorian said. “I've only done two training sessions [so] maybe it's a case of thinking about the next game the following week as a more realistic option.”

You're correct. I can't see any of these new signings starting. Cameos off the bench? Probably.

I think the important thing is for the first 2-3 games is to win. Any old way, any how. The start to the season is favorable. We need to grab points early, or it will bite us in the backside come May.

The squad we will be starting, without Kean, Gbamin, et al, should be more than strong enough to get points in our first 2-3 games.

David Pearl
7 Posted 06/08/2019 at 21:47:01
Yes Jamie,
Palace looked awful pre season... unlike us! I'm sure the signings have given the whole squad a lift and we start with fire. Niasse hat trick
Derek Knox
8 Posted 06/08/2019 at 22:03:25
I think of all the incomings, apart from Moise Kean, this lad may be the surprise package. He had the least publicised introduction, is the right age, and has the ability to slot in at CB should the need arise.

If you look at the clubs who were interested too, don't think he will let us down at all.

Sam Hoare
9 Posted 06/08/2019 at 22:09:53
Derek, yes, his signing went under the radar somewhat but I think he'll prove an excellent capture. Quick, strong, good in the tackle and a pretty decent passer. His positioning and decision making could use work but hopefully Silva can help him with that.

I expect him to really blossom in second half of the season.

Jay Wood
[BRZ]
10 Posted 06/08/2019 at 22:22:07
Two back-to-back interviews and pressers to watch on both Gbamin and Kean here. It hasn't been edited yet, so you need to move the slider forward to around 10m 30s for the Gbamin interview and then 42 mins for the Kean interview.

Both spoke through translators, although Gbamin has already spoken in English on his first day. He clearly understands most of the questions asked, but responded in French for the translator to do his job.

Kean had a good Italian translator alongside him and he must have repeated 4-5-6 times he is grateful of the support Blues fans have shown him already, but the best place to repay them is on the park with 100% effort.

I'm guessing he already understands/speaks a little English from this presser and the following footage of their 1st day of training with the squad. You can see him jogging lightly alongside Seamus who is chatting away to him and the youngster appears to reply.

Fleeting as this second video is, you can see him skin the likes of Davies and Gomes a couple of times with a simple shimmy.

They look and sound good lads.

But I do like Kean and Gbamin. Optimistic they will both prove excellent purchases.

Karl Meighan
12 Posted 07/08/2019 at 06:24:28
It is important to start well but I don't buy this we have easy games to start with. You only have to look at the points taken off so called big teams at the end of last season and we play them all twice.

Tony Everan
13 Posted 07/08/2019 at 10:10:19
Both Kean and Gbamin have that look about them,uncompromising, they mean business. There is an 'edge' about them both. You can tell Gbamin is a great athlete, fit as a butcher's dog and will give us that injection of tenacity we have lost with Gana.

I am delighted with them, and I think in today's market reasonable prices. I think they will prove to be great buys.

Conor McCourt
14 Posted 07/08/2019 at 23:27:26
Sam I saw him play in a 2-1 defeat at Dortmund when he played on the right of a 3. To me he looked really strong positionally and from what I have been reading is one of his mains strengths so surprised you highlighted this as an area which needs improvement.

He really stood out in that game despite that not being his natural position and from his interview I'm guessing that is what he meant by us playing him in his proper role.

What I took from that game is how composed he was on the ball with both his left and right and he didn't strike me as aggressive as Gueye. Would be interested in any more detail you can share as I'm excited by him despite the massive shoes to fill