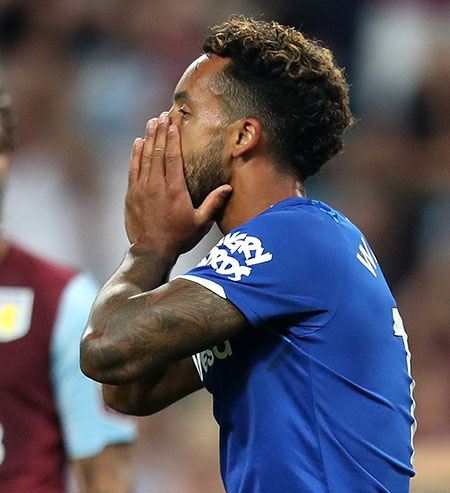 Everton passed up the chance to temporarily take top spot in the Premier League for the first time in 12 years as they were beaten 2-0 by a spirited Aston Villa.

Jota caught the Blues' defence napping in the 22nd-minute and Wesley latched onto his through ball to tuck the ball past Jordan Pickford to put Villa ahead with their first effort of the game.

Dominic Calvert-Lewin had a gilt-edged chance to equalise cleared off the line 10 minutes later but Everton generally lacked imagination and struggled to make inroads to the hosts' defence until Alex Iwobi and Moise Kean made a belated entrance with an hour to go.

The Nigerian fired a shot off the post with 81 minutes gone and the Italian served up an equaliser on a plate for Theo Walcott in the 90th minute that his fellow substitute volleyed over before Lucas Digne spooned another good chance well over in stoppage time.

Anwar El Ghazi then ensured Villa had the last word as they carved Everton open for a second time with almost the last kick of the contest.

With Jean-Philippe Gbamin missing from the squad, Morgan Schneiderlin returned to the starting line-up after missing the win over Watford through suspension and partnered André Gomes in central midfield. Iwobi and Kean were again named on the bench and they would both come on to make a big difference to a stuttering Everton attack in the second half.

Just as they did against the Hornets and Crystal Palace on the opening day, Marco Silva's men started the stronger of the two sides and had an early penalty claim turned down when Richarlison tumbled in the box under the attentions of Grealsh.

Villa began to turn the tables against a sluggish-looking Blues midfield and when Grealish found Jota with a quick free-kick, the Spaniard put Wesley in to despatch a clinical finish past the stranded goalkeeper.

Everton almost responded with a superbly-worked move that saw Schneiderlin pick Coleman out with a beautifully-flighted ball over the defence but though Irishman's knock back found Calvert-Lewin in a central position near the penalty spot, the young striker couldn't find a gap past Tom Heaton or Bjorn Engels on the goal line with a first-time shot.

It wasn't until Silva made a double change where he withdrew the ineffective Sigurdsson and the somewhat unfortunate Bernard that Everton began to look more dangerous in front of goal.

Iwobi had one shot following Digne's volleyed centre charged down that looped up into Heaton's arms in the 71st minute but 11 minutes later he must have thought he had scored on his first appearance for the Toffees since signing from Arsenal.

Swivelling onto another pass from Digne, this time a cushioned header back across goal, the Nigerian skidded a shot off the base of the post and back out again.

Pickford's involvement in the second half was merely to parry away a stinging drive from El Ghazi in the closing stages and then pick the ball out of the net after the Dutchman had fired the second goal in off the underside his body after five minutes of injury time.

In between, Kean's cross had picked Walcott out but the winger made a mess of the finish and then Walcott himself crossed to Digne but the Frenchman was equally lacking in composure, leaving Silva throwing up his hands in frustration on the touchline.

The result and Everton's first goals conceded this season condemned Silva to a first defeat of the season and with plenty of work to do before the trip to Lincoln on Wednesday in the Carabao Cup and then the visit of Wolves beyond that on 1st September.