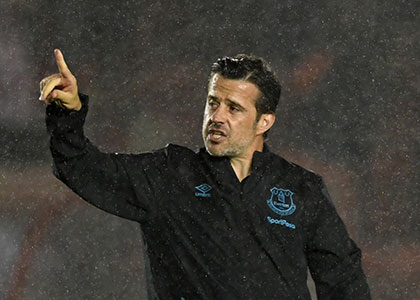 Marco Silva was impressed by his players' personality and professionalism in their 4-2 victory over Lincoln City in the Carabao Cup this evening.

Everton recovered from the concession of a goal after just 21 minutes to take a 2-1 lead and then go on and win the tie in the closing stages following Bruno Andrade's brilliant volleyed equaliser in the 70th minute.

Alex Iwobi scored his first goal for the club, the decisive strike with nine minutes left that made it 3-2 and Richarlison added another late on to seal the Blues' passage to the third round and a date with Sheffield Wednesday at Hillsborough.

Earlier, Lucas Digne had scored a stunning free-kick to cancel out Harry Anderson's opener before Gylfi Sigurdsson buried an emphatic penalty that had initially turned the contest on its head at 2-1.

“Our team showed one important thing in my opinion — apart from the attitude, commitment and desire, we showed personality,” said Silva on evertontv, having pledged to name a strong line-up in keeping with Everton's ambitions in the cups this season. “We respected ourselves, we respected our fans, we respected the competition. We were serious.

“We knew before the match it our obligation to come here and to go through in this competition, but we also know how football is difficult in some moments.

“They scored twice – and their second goal was fantastic. But [each time] they scored we had a good reaction. At 2-2, we changed the formation and took some more risks.

“It was a good performance in some moments. But, for me, the most important thing was our players were serious, they showed they are very good professionals and they won the game.”


Alan J Thompson
1 Posted 29/08/2019 at 07:19:59
Oh dear. I know it is not his first language but it's starting to sound Pythonesque. The team showed one important thing. No, two important things. Well, two if you don't count the other two but just one very important thing.

In other words, we gave them a goal start and we scored again when they equalised late in the game.

He also is saying we had character and lists the characteristics.

Managers are to be positive. He has been so. And there's been no bullshit or pythonesque comment.

I haven't agreed with some of the positives spin he's put on the league performances but he's right here.

Pat Kelly
5 Posted 29/08/2019 at 13:36:54
The important thing is we found the net four times. We needed to rediscover the feeling of scoring. A home game now is just what we need to maintain that.
Minik Hansen
6 Posted 29/08/2019 at 14:29:54
That Digne freekick was sublime. I think we scared them right there. I wonder how many would have got in against all the Premier League teams.
Alan J Thompson
8 Posted 29/08/2019 at 15:12:00
Steve (#2); I know you've pinned your colours to this bloke and won't have anything bad to say about him but, if you don't like other people having an opinion, then go back to your settlements and bingo numbers.
Minik Hansen
9 Posted 29/08/2019 at 17:20:16
Someone please make a wallpaper of Richarlison holding that shirt up, with his words: "Play for the name on the front of the shirt and they'll remember the name on the back",
surely anyone in here knows someone that could do that? That would be boss!
Kieran Kinsella
10 Posted 29/08/2019 at 17:55:26
The game had some (hopefully) key psychological turning points. I was surprised Sig was given pen duty but he smashed it home and maybe put to rest his spot kick troubles. Rich has been looking like a sulky kid not getting his way in the past three games, maybe his goal will spark an upturn in his performance.

I would say Digne, Iwobi and even Schneids, particularly stood out as people who were just not prepared to accept anything less than a win. That's an attitude I haven't seen so much of late as we seem to have wilted under pressure. Again, hopefully that is a good sign.

There was some criticism of the defense. But, firstly I would give some credit to Lincoln. They ran their hearts out and didn't give our players a moments rest. They also scored a fantastic goal. Holgate hasn't played at CB or for Everton for a long time. No wonder he was a little rusty. Then we had a new right back making his debut which again means some degree of uncertainty at the back.

Derek Knox
11 Posted 29/08/2019 at 18:53:26
Minik, while I agree with your general idea for memorabilia purposes, I disagree with the act of disrobing, not that I'm a prude or anything BUT it is a CERTAIN YELLOW further down the line.

I can understand the exhilaration at scoring, and if it was the winning goal in a match, which it wasn't in this case but still do not condone it. It may just happen further down the line that Richie's suspension leaves us short up front, and we forfeit three points as a result.

You seem to be very touchy. Steve (2) WAS just expressing his opinion just like you. I also think Silva should be complimented for his part in the win, despite his not having A Level English. Mind you that is just my opinion Alan.