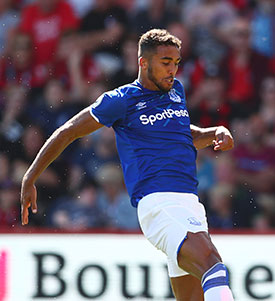 Dominic Calvert-Lewin scored an impressive headed goal but while they generally struggled in the final third, Everton's biggest problems were at the back

Everton's away woes continued with another shoddy defensive performance on their travels that condemned them to a 3-1 defeat at the Vitality Stadium.

With third place in the Premier League beckoning, the Blues had fallen behind to Callum Wilson's first-half opener but put themselves back in a position to win this game when Dominic Calvert-Lewin scored a brilliant header shortly before half-time to make it 1-1.

Marco Silva's side were in greater command of the contest and were pressing for a second goal midway through the second half when they were undone by two poorly-conceded goals in the space of five minutes that put Bournemouth into what proved to be an unassailable lead.

Silva was forced into one change when André Gomes proved unable to shake off a rib injury that he sustained against Wolves two weeks ago and he was replaced by Morgan Schneiderlin in central midfield alongside Fabian Delph.

The manager made one more alteration to the side that has started the last match by inserting Calvert-Lewin in attack in place of Moise Kean but despite having the better of the early exchanges, Everton lacked threat in the final third.

The Cherries, meanwhile, were in combative mood and despite conceding nine goals in their opening four matches, looked fairly assured at the back apart from the odd error that prompted by Silva's high press.

Gylfi Sigurdsson forced the first save of the match when he had to bat the Icelander's sliced cross over the crossbar and Philip Billing saw a side-foot shot from 20 yards deflect narrowly wide as both sides enjoyed some bright attacking moments in the first quarter of an hour.

It was Richarlison, who was bright and enterprising before fading from the contest in the second half, who almost opened the scoring in the 19th minute, however, when he cracked a dipping shot from 25-plus yards off the angle of crossbar and post.

Four minutes later, however, Everton were undone by a set-piece in all-too familiar manner. Dominic Solanke easily won a near-post header, his flick-on was knocked back in front of goal by Josh King where Wilson was unmarked to nod it in from close range.

With such a poor record when forced to come from behind to win in recent years, Everton needed a quick response but had to wait until the 41st minute before they were back on level terms.

Another Billing shot had deflected just wide at the other end after Richarlison had headed Lucas Digne's cross wide but the Brazilian was involved in the move for the equaliser, picking up Seamus Coleman's pass from the right and clipping in an excellent cross. Calvert-Lewin hung impressively in the air before planting a header under the bar to send the visitors into the break at 1-1.

Despite enjoying 60% of the ball, Everton continued to struggle to carve out clear-cut opportunities after Ramsdale had pushed Sigurdsson's snapshot over early in the second half. In the meantime, Silva's side were becoming sloppier in midfield and increasingly rash in the tackle and when Richarlison charged back and cut down his man with an ill-judged tackle, it set the Cherries up with another set-piece opportunity.

Substitute Ryan Fraser fired in a low, awkward free-kick that Delph tried to block with his left foot but could only help it past Jordan Pickford.

Wilson was in again just two minutes later and somehow didn't get a shot away from an inviting position but after Silva made a double change to introduce Kean for Sigurdsson and Bernard for Calvert-Lewin, the Bournemouth striker made no mistake as the Blues' defence was caught out in embarrassing fashion.

The ball was dropped over the top following a Cherries throw-in on their left flank for Wilson to race clear of a lead-footed defence to easily lob Pickford and put the match beyond Everton.

The Blues tried to rally in the final quarter of an hour and Alex Iwobi tested Ramsdale with a decent effort from Kean's lay-off that the keeper parried away but Richarlison lashed the rebound towards the corner flag.

That would be the Brazil international's last contribution before being withdrawn in favour of Theo Walcott but the former Arsenal man's daisy-cutter in stoppage time was as close as Everton came to troubling the home side's goal as the game petered out into another disappointing away day for Silva, his men and the travelling Evertonians.

The result lifts the Cherries over Everton in the table and means that the latter have won just five matches on their travels since the start of last season. Of equal concern will be the re-emergence of the Toffees' worrying susceptibility at set-pieces, a significant impediment to their progress last term.