An overwhelming majority of Evertonians have a favourable opinion of the initial designs of Everton FC's proposed new stadium at Bramley-Moore Dock according to ToffeeWeb's latest reader poll. 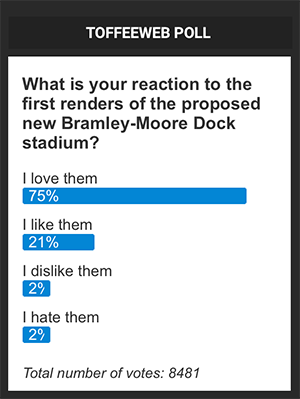 The club unveiled the long-awaited renders of architect Dan Meis and his team's vision for the new ground on the banks of the Mersey in July and the positive reaction from the fanbase at large has been mirrored in the results of our poll.

We asked Blues fans for their thoughts on the designs and 75% of the 8,481 who responded said that they “loved them”. A further 21% said that they “liked them” while only a combined 4% had a negative view.

The release of the visuals was part of the second phase of consultation of Everton supporters, local residents and businesses undertaken by the club ahead of the planned submission of planning applications later this year.

Everton propose building a 52,000-seater stadium on the derelict docks site with a tentative completion date in 2023.

I hope not. The new ground is a crucial part of our future. I do have some misgivings about the debt it may load on the club, but overall I support the project and truly hope it comes to fruition.

Yes you did, I remember your post very well.

Jay Wood
[BRZ]
4 Posted 23/09/2019 at 20:57:42
Ahem...for those expressing cynicism about this announcement, did you bother reading the opening paragraph or noting the source of the poll?

This is Lyndon and Michael reporting TW's very own poll conducted on these very pages.

Now of course, some with a particularly fertile imagination could, I'm sure, come up with some dark and sinister Machiavellian plot connecting the editors and the TW forum to some deviant puppet master in the corridors of power at the club's Liver Building hub.

Anyone of that ilk, I wonder, on this thread..?

Prepare yourselves, Lyndon and Michael: you are about to be exposed as mere lackeys of the satanic forces that rule over Everton, deceiving 1000s of Evertonians in the quarter-century of TW's existence!

Don't be surprised if tomorrow they publish a story highlighting the great success our U23 and U18 sides are having this season.

In fairness our Academy system is producing players of Premier League quality. On Saturday we saw one – John Lundstram – play that cracking pass for the 2nd goal. Must have brought a lump to Unsie's throat.

I have made the same mistake. I am sceptical about anything that looks like a cover up PR announcement after a defeat, whith does happen.

Had to laugh there, as I've said on many an occasion we all have a common goal, and all support the same beloved team, but as you both succinctly alluded to, that is sometimes questionable and definitely debatable.

I see what you did there, Michael!

Nice side step! It's all on Lyndon then, evidently THE 'deep plant' and undercover lackey on the payroll of Everton's Ministry of Truth distributing Newspeak bulletins to the unsuspecting TW audience!

No dissenters permitted, because:

"Everybody knows what's in room 101 of the Liver Building, Winston..."

There's nagging doubts, It's difficult to fully relax and enjoy these images until the club indicates the money is there and it's ring fenced (given our history of spin and failure).