Walcott cleared after taking blow to the head against City 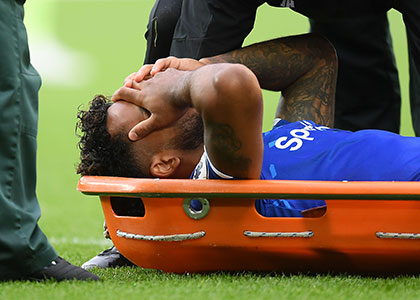 Theo Walcott was back at Goodison Park shortly after the final whistle of this evening's 3-1 defeat to Manchester City following a precautionary hospital visit to check for concussion.

The winger was hit on the head by a cross in the first minute of the match and was eventually stretchered off after being deemed unable to continue.

Manager Marco Silva confirmed that the player seemed fine on his return to the stadium and doesn't expect any complications.

“He is already in our dressing room. He went to the hospital for a scan. He did that and now he is okay.

“It's a moment now for him to take a shower, to go home and rest and in the next few days but right now he is okay.”

Contrary to popular belief, if he is played properly he can give us something different. Come on Marco, start with solving a Rubix Cube, then move on to football.

Dave Williams
3 Posted 28/09/2019 at 22:42:58
I suspect that's he was selected in part because Silva wanted Richarlison to cut in from the left onto his right foot.

Glad to hear he is okay.

Next couple of games will determine if Marco can turn it around or not. I know it's been said but we need to play with pace and get forward a lot quicker than we do.

I'm still recovering from banging my head on the wall the day Allardyce was appointed.