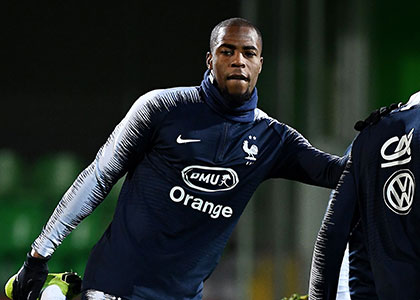 Djibril Sidibé has been recalled to the French national side after Leo Dubois was forced to withdraw through injury.

The fullback, who made his Premier League debut for Everton as a substitute at Burnley on Saturday following Seamus Coleman's dismissal for two bookable offences, was a member of the France squad that won the World Cup in Russia in 2018 but has not been included in recent months.

He will join his Goodison team-mate, Lucas Digne, with the French squad over the international break.

Sidibé was signed on loan by the Blues from AS Monaco this past summer after Jonjoe Kenny was allowed to join Schalke in the German Bundesliga, also on a season-long loan.

Everton reportedly have an option to purchase Sidibé for €14m next summer if his loan spell at Goodison Park is a productive one.

To date, the 27-year-old Troyes-born player has made two starts for the Blues, both in the League Cup, against Lincoln City in the second round and Sheffield Wednesday in the third round.

France are the World Champions… We have a right-back and a left-back in their squad. England made the final four of the World Cup and the League of Nations. We have their starting goalie and centre-back. Yerry Mina was one of the players of the World Cup.

Put them all together, along with the Captain of Ireland, and what do you get? A pile of shit.

Whereas Schneiderlin who is NOT in the squad, gets picked every game in which we have lost. People saying Silva needs more time, yes in Walton Jail.

Jim Bennings
7 Posted 08/10/2019 at 10:49:36
Sidibe should be getting used more often now, the West Ham game with Coleman’s suspension a perfect time to start giving him a run of games.

Whilst Coleman is club captain, he’s not the same player that he was between 2010-2016, he was undroppable, now let’s be brutally honest, he is not.